Stroke: the disease with no warning

A stroke occurs when an artery in the brain is blocked or when a blood vessel bursts and the blood cannot reach it. Although half of all victims recover, the other half die or are left with some disability and life-changing sequelae. In the developed countries, it is the leading cause of death among women, and the second most frequent among men. On the positive side, prevention is relatively simple. Nine out of ten stroke cases could be avoided by adopting healthy lifestyles, according to the Spanish Society of Neurology, with whom Fundación MAPFRE and Freno al Ictus [Stop Strokes] have launched a campaign to inform the general public about the symptoms and what to do in case of emergency. And also how to prevent it? A specialist and a patient tell us how they deal with a disease that one of every six people will suffer at some time in their lives.

She has been working for many years at La Paz, one of Spain’s leading hospitals, researching this medical condition. María Alonso de Leciñana (Madrid, 1965) coordinates the cerebrovascular disease study group at the Spanish Society of Neurology. She is also a Neurology Service staff physician at the Stroke Center of La Paz University Hospital. Health care professionals there are striving to ensure that strokes are diagnosed and treated in the shortest time possible. To a large degree, the patient’s survival and the scope of the damage suffered will depend on the speed with which they are treated.

What does your work in La Paz entail?

I’m a Neurology specialist and my work involves treating cerebrovascular diseases, which include strokes. This condition affects some 120,000 people in Spain and the figure is on the rise. This is a serious disease, which means that patients must be admitted to hospital in order to treat them properly, mitigate the sequelae and avoid complications. I love my job, especially comprehending and caring for my patients, being there for them. This is much tougher than the scientific aspect. It’s a job that is really rewarding.

Is it common to come across empathetic doctors?

I’d say it is, although I’m sure that, if you ask patients, they may tell you otherwise. All physicians have their own personality, but I believe we all have a clear notion that we are here to serve our patients. Any disease places the patient in a situation of inferiority, of dependence, of fear; so they really need someone who can show empathy. Then there are the families and we must explain everything to them in a language they comprehend, particularly when we have to ask their permission to administer certain treatments. This is something we learn as we go along.

How does this disease usually raise its head?

A stroke gives no warning; it just appears suddenly out of the blue. There are times when people suffer a transient ischemic attack. This, in itself, may be a warning sign, but it does not last long and does not hurt. As a result, people often don’t go to the hospital and don’t even seek help. A stroke affects a certain area of the brain and this manifests itself on the opposite side of the body. The symptoms may be loss of strength, paralysis on one side of the face, difficulty speaking, sudden loss of vision or stability, and sometimes very intense headaches. Many patients who have suffered an attack admit some time later that, when it happened, they wanted to say things, but were unable to. These are warning signs that we must be able to recognize; hence the importance of information and awareness campaigns.

Men are more prone, but it is more lethal in women. Why is that?

The figures are alarming. According to data from the INE (Spain’s National Statistics Institute), nearly 16,600 women died from a stroke in 2016. Many people are unaware of this figure. Society at large believes that more women die of breast cancer, but the figures clearly show that twice as many women die from a stroke than from this kind of tumor. There are two reasons for this. The first is age, a highly important risk factor when to comes to suffering a stroke. Given that they live longer, women are more likely to suffer from this disease. In addition, there’s also the fact that women suffer more severe strokes and, as they occur at ever more advanced ages, they generally have other diseases as well. All this results in strokes causing greater mortality among women. 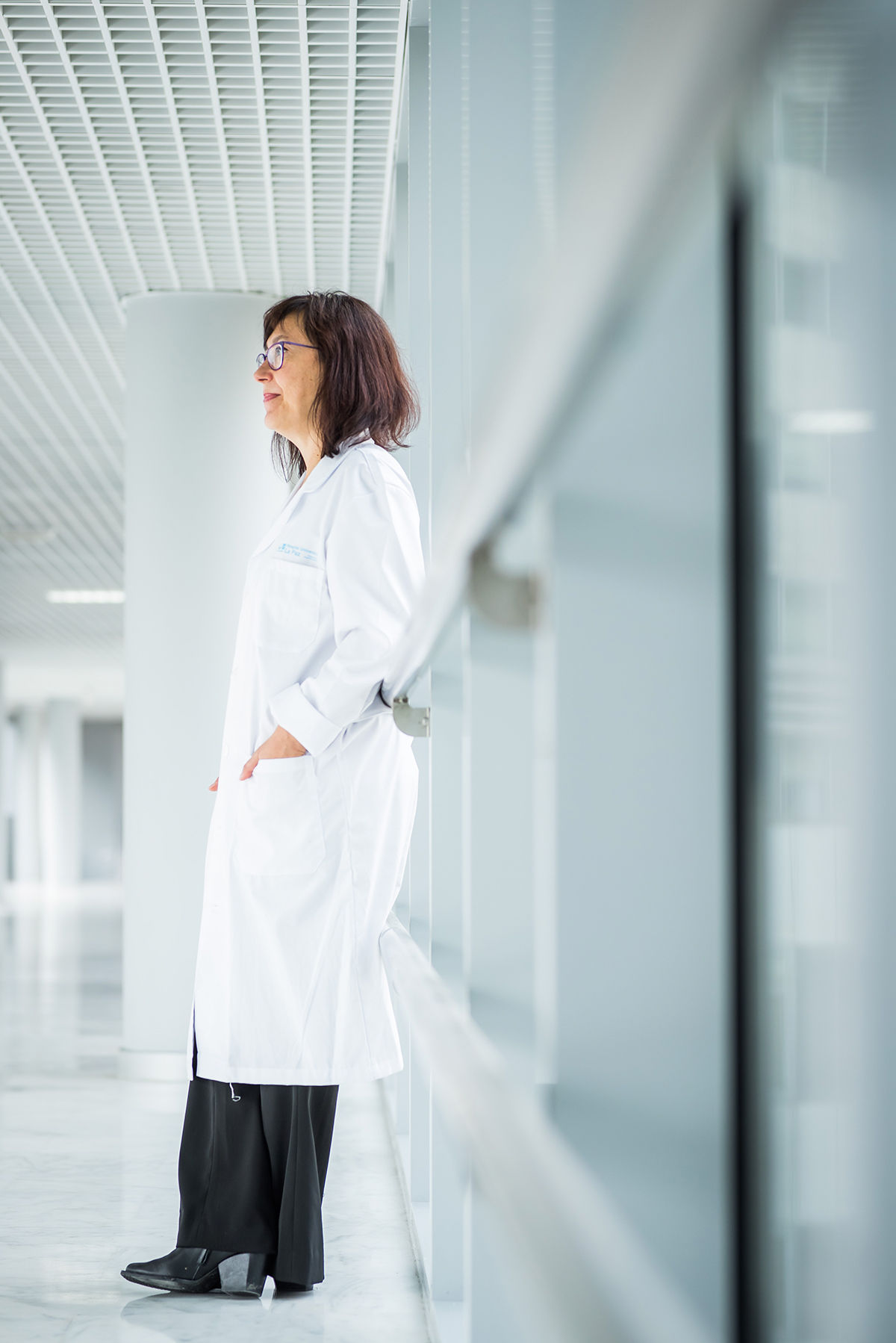 How should we respond?

We must always call the emergency services – in Europe the number is 112 – as this ensures the patient will be transferred to a hospital with a stroke unit. In Madrid, for example, a Stroke Code is activated when a call is received that someone may be suffering an attack. The system ensures an ambulance and a doctor arrive in a few minutes in order to confirm the patient’s symptoms and get them to the nearest center, in order to offer the most suitable treatment without delay. In the case of ischemic strokes – produced by a clot cutting off blood supply to part of the brain – which account for approximately 80 percent of the total number, the clot can often be dissolved by means of an intravenous thrombolytic treatment. Sometimes more complex treatment proves necessary, such as a mechanical thrombectomy, a technique that is applied up to six hours after suffering this type of stroke. Every minute counts, and the sooner the treatment is administered, the greater the chance of recovery.

Half of those who suffer a stroke recover from it. This is a great deal better that some years ago.

Indeed so. The survival and recovery rates have improved dramatically in recent years. 50 percent survive without any – or with minimal – sequelae, while the other 50 percent suffer some kind of disability or die. Stroke mortality affects 15 percent of patients, who lose their lives in the first three months after having suffered an attack.

It is striking that, in addition to age, stress and pollution are also behind many ischemic strokes.

Until recently, it seemed that stress could have a bearing, but today this is a confirmed fact. This has been shown by studies which indicate that, when a person suffers continuous stress, hormonal defense mechanisms are activated. Over time these cause inflammation which may favor the development of arteriosclerosis and also increase the presence of transient cardiac arrhythmias which can also cause a stroke. Stress also leads to unhealthy habits, such as a poor diet, smoking and alcohol consumption, which are closely linked to the possibility of suffering this disease. It is therefore essential that we learn how to manage stress and work on all the risk factors, given that it is the full range of them that matters.

And what about drugs?

Illegal drugs, particularly cocaine, are also very dangerous. They produce direct damage and can cause spasms in the arteries of the brain, thus facilitating the formation of local thrombi or the occlusion of an artery which eventually gives rise to a stroke. We see this with quite some frequency. On one of my latest duty shifts, I attended three young patients who needed a mechanical thrombectomy. One of them, about 30 years old, had consumed this substance that same night. Days later we talked to him about the consequences he could have suffered. I don’t think he’ll take cocaine again. It’s a very serious matter and it affects an ever-increasing number of people, resulting in rising figures of young people suffering strokes.

One of the major advances in your hospital has been the introduction of telemedicine. What are its benefits?

The stroke unit at La Paz, for example, is connected with another center which has no such unit, via a system that enables us to supervise the work of emergency physicians at smaller facilities where no neurologist is on duty, giving them the instructions they need. Telemedicine is proving to be a great step forward. It enables us to examine the patient, consult the results of any tests done and swiftly decide which treatment is best, even before the victim is transferred by ambulance. It must be borne in mind that we only have a few hours within which to provide certain emergency treatment, such as intravenous thrombolysis.

Do you think diagnoses today are more frequent and better?

Without a doubt. Patients reach us earlier and doctors are better prepared to identify an emergency, be able to diagnose a patient quickly, know what kind of a stroke it is and what treatment should be administered.

What do you feel have been the most outstanding discoveries regarding strokes in recent years?

What has most influenced our strategy in relation to this disease are the stroke units and the reperfusion therapies – thrombolysis and thrombectomy – which are certainly helping to mitigate the sequelae. For those patients who have not fully recovered, it is necessary to boost rehabilitation work and studies of brain repair therapies that could help them. In this sense, we are conducting various lines of investigation, some with stem cells, and identifying those factors which foster the plasticity of the brain. Contrary to what was previously believed, damaged neurons, just like other parts of our body, are capable of recovering from an injury. Even the healthy ones can take over the functions of others that have died. Today we know that the brain can be repaired, especially if action is taken quickly.

Is this condition equally prevalent in the rest of Europe? And in Latin America?

Except for the Eastern European countries, the situation is very similar in the rest of Europe to that in Spain as regards resources and research. In Latin America, the situation varies a great deal, although the risk factors are very similar. In general, we are talking about a region with many rural areas far from their capital cities, where citizens face an additional barrier, namely being unable to afford the cost of these treatments. The various health systems are by no means on a par. Even the public centers do not cover all the advances in the treatment of this disease. In fact, very few include a thrombectomy, for example. I’d like to highlight the work being done in Argentina, Chile and Brazil, an example of really well organized stroke units which even reach into the state of Amazonas. In Mexico and Colombia, for example, progress is also being made.