A conversation with Nicholas Nixon

On the occasion of the publication of the catalog dedicated to the Nicholas Nixon retrospective, Carlos Gollonet, chief curator of photography at Fundación MAPFRE, spoke for several hours with the American photographer. You can read the full interview in the catalog and in our digital edition. We reproduce some excerpts here.

You did not get into photography very early. What were your main interests in those formative years?

What most interested me was 20th century English and American literature. I worked in a bookshop that had lots of art books and I started to take them home, to learn. My family had no books or music, and did not travel, so I was enthralled with the atmosphere in Ann Arbor, Michigan. In the summer between my third and fourth year at the University of Michigan, I took a photography course. Two days later I spent all my savings on a Leica M3. In St. Louis I took photos of anyone or anything for twenty-five cents. You could say they were assignments, but I was determined to take advantage of the situation to take good photographs for myself.

You were laying down what would be your way of working from then on: tripod, large-format camera…

In 1969 I saw a picture by Walker Evans, Saratoga Springs, NY, 1932, and that accentuated, voluptuous, amazing, descriptive quality, especially the rainsoaked sidewalk, totally stunned me. A large-format camera truly remains the only way to achieve that.

You formed part of New Topographics, a key exhibition for American landscape photography.

That was before my exhibition at the MoMA, so I was proud, yet had mixed feelings with respect to forming part of a trend. I think it was more important for all the others than for me.

And your first solo exhibition was at the MoMA…

The first exhibition at the MoMA was really important, as was my first Guggenheim Fellowship. After that, people sought me out and I had the wonderful privilege of never having to worry about promoting myself in any way. The freedom that implies is priceless.

I had the wonderful privilege of never having to worry about promoting myself in any way. The freedom that implies is priceless.

From 1977 onward, people were to be your prime target.

I always see something tremendously powerful in people and given that, as a general rule, they like this recognition, a kind of mutual contract is entered into, rather like seduction. People like posing for the camera.

Bebe, your wife, is also one of the protagonists of the Brown Sisters, the well-known portraits of the four sisters.

For many years, Bebe’s father took a picture of the whole family which he used as a Christmas card. Undoubtedly, seeing them had something to do with wanting to take them. But I also rebelled against them because everyone was smiling and it felt false, a kind of lie.

How do they feel now they are so popular? Do you feel more pressure each year?

I don’t think any of us feels any pressure. In fact, we all love it; it’s like a chance to get all five of us together.

There is one question floating in the air when one sees the series: how long will you continue the series?

I want to keep doing it as long as I and at least one of them are here. I believe that they have implicitly promised something like that.

When you see your work, do you think of something you would have liked to do and have not yet done? What is the next thing you will be doing?

I would have liked to do my projects on people better. To have asked even more of them, and of myself. To have been better. I’ve really enjoyed doing this retrospective. Now I’ll start with something new. I don’t know exactly what yet, but I think it will involve more of those characters of mine. Perhaps unknown individuals again, I’m not sure, but I feel quite daring in this respect, if it’s not too presumptuous of me to say so.

Born in Detroit, Michigan, in 1947. Nicholas Nixon graduated in American Literature in 1969. After his postgraduate studies in Photography at the New Mexico State University, he combined his classes as a photography professor at the Massachusetts College of Art in Boston with his work as a photographer. His interest in portraiture and social photography has resulted in well-known series such as The Brown Sisters (1999-2012) or People with AIDS (1991). Since 1976, the year in which his first solo exhibition was held at the MoMA in New York, his work has been exhibited in numerous galleries and museums, and he has received prestigious awards. 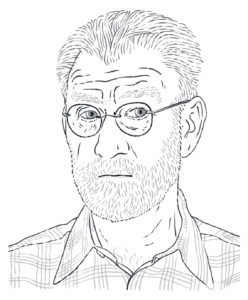