The project that was ahead of its time

This year we are celebrating the 25th anniversary of the construction of the MAPFRE Tower.

In all the images of the Barcelona skyline, two neighboring towers clearly stand out, majestically looking out to sea from the coastal limits of the city: one is the Arts Hotel and the other is the iconic MAPFRE Tower.

Having stood proud for 25 years now, in its day the Tower marked a strategic drive by MAPFRE – then headed by Julio Castelo Matrán – to increase its presence in Catalonia.

First, they put in a bid for the terrain at a strategic corner of the future Olympic Village, and then set about building the second tallest building in Spain – the tallest was then the Picasso Tower in Madrid, at 155 meters. People were already sensing the major urban overhaul the city of Barcelona was undergoing, opening up to the sea and installing leisure areas and modern settings that today decorate its shoreline.

The building was designed by two young architects, Íñigo Ortiz Díez de Tortosa and Enrique León García, who drew up a simple, yet highly avant-garde project. They anticipated some of the architectural solutions that today are standard practice for this type of buildings, but which, at the time, constituted a veritable revolution.

A project with a very simple proposition: to make a top-quality, innovative building at a reasonable cost, one which reflects MAPFRE’s principles

Currently the concepts of sustainability and energy saving are essential in architectural projects, but 25 years ago they were just words. We could not say they were unknown concepts, but they were highly unusual in professional circles and this was a time when the quality of construction in Spain was not as advanced as in other major countries. 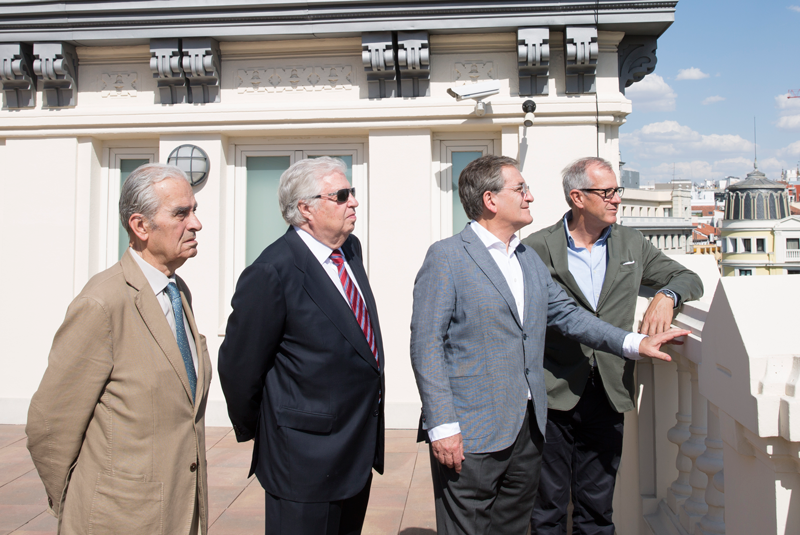 Various MAPFRE project managers gathered in Madrid recently with some of the architects responsible for the design of Torre MAPFRE to mark the 25th anniversary of the building’s construction. From left to right: Fernando Carvajal, Fausto Rodríguez del Coso, Enrique León García and Íñigo Ortiz Díez de Tortosa.

From the outset, the architects saw an opportunity to bring a series of innovations into the project that could ensure the speed of construction and energy saving, while including the latest trends in architecture, materials and construction procedures. Many of them were to be used for the first time in Spain, some even a first in Europe.

To begin with, the foundations were laid using large-diameter piles reaching depths in excess of 25 meters. Two basement levels were constructed below sea level using concrete retaining walls, thus gaining extra space to incorporate parking areas, despite the added complexity given the project’s proximity to the coast. The double-deck elevators, designed to increase passenger capacity, were the first in Europe of this type, and the fastest at the time. With the innovative design of the façade, the inclination of the glass not only avoids glare and reflections, but also affords significant savings in maintenance costs. The tower has a fully approved heliport for helicopters to use and a decentralized power generation system that was also innovative in its day.

All of these aspects, and some others of lesser importance, resulted in the MAPFRE Tower and its leanings to sustainability and innovation being used as a case study in universities and international forums. Even recently, a study was conducted in Italy in which the MAPFRE Tower was shown as an example of architecture that can be easily dismantled and recycled, due to its large degree of prefabrication and simplicity, with few materials in both the structure and its façades and installations.

What was one of the most innovative buildings in Europe at the time, will be so once again in the next few years, thanks to the profound renovation of the Tower, which is being carried out to modernize it and place it among the top ten of this type of tall office buildings in the European Union.

Apart from its commercial exploitation, the fact is that the MAPFRE Tower is, and will remain, an icon of Barcelona, forming part of all the images of this city that are projected anywhere in the world

A symbol of post-Olympic Barcelona

The 1992 Olympics changed the physiognomy of Barcelona. Not only did they take the opportunity to improve infrastructure and regenerate some neighborhoods, but, in addition, the city was opened up to the sea; the Olympic Port was built and accesses to several beaches were enhanced. The MAPFRE Tower is one of the emblems of the urban redevelopment the city underwent in 1992. Visible from all over the city, it is the tallest skyscraper in Catalonia, along with the neighboring Hotel Arts, which is of identical height. Both face out to sea, between the Nova Icària and Barceloneta beaches, and dominate the Olympic Port. The complex formed by the two towers is rounded off with the Peix d’or (a sculpture in the shape of a fish) which Frank Gehry installed to mark the Olympic Games and which has become a symbol of the city. With 40 floors and 152 meters in height, the MAPFRE Tower is already part of the Barcelona skyline. It can be seen from different points of the city and its innovative architecture, with the alternating inclinations of its façade, creates a gigantic mirror effect which reflects the life of the city