Therapy to heal the wounds of poverty

One and a half million children live on the streets of the Philippines. Many of them begging, homeless, without love and without a future. Fundación MAPFRE helps to finance two shelter homes that the Kalipay Negrese Foundation runs on the island of Negros, one of the archipelago’s poorest, where some 100 children rescued from misery now live.

In 2007 a social worker came across little Lisa hanging upside down in a shanty dwelling, crying in pain after a savage beating from her uncle. She was just five years old, malnourished and dirty. Her uncle gave her a beating because she returned home with little money after begging all day on the streets. Her father had abandoned her, while her mother was a drug addict and prostitute. But everything changed for her that day: that man took her to a shelter home where they took care of her, gave her an education and, above all, affection. Lisa is now a new person: when she was rescued, she would not let anyone give her a hug, but the love she received there transformed her into an affectionate little girl.

David’s story is somewhat similar. When he was 12 years old, in 2012, he was found begging for food on the streets. His family was very poor and one of his siblings had died of severe malnutrition. His father, consumed by the hardship, sometimes mistreated his wife and their children. David was then a child with no future, distrustful and elusive about hugs, but suddenly his luck also changed: he was taken into the same home as Lisa and now smiles with no sign of fear. And he now has a new dream: to become a sailor.

Lisa and David are two of the 400 children rescued by the Kalipay Negrense Foundation since 2007 in the western region of the island of Negros. This area is one of those with the highest rate of child poverty in the Philippines, in itself already a poverty-stricken country. According to UNICEF, around 23.7 million citizens of this country (a quarter of the population) live below the poverty line, while six million children suffer from malnutrition.

But poverty never comes alone: it is always accompanied by violence, abuse and exploitation. According to UNICEF, of the 1.6 million who live on the streets, 600,000 are forced into prostitution and around 28 are arrested for some offense on a daily basis. For this reason, the Kalipay rescue program not only consists of taking children in and meeting their material needs until they reach adulthood. It is also designed to offer them a home where they can heal the emotional scars of abuse and poverty. A new life. As Anna Balcells, founder and president of Kalipay, explains “therapy is important for these kids to overcome their past and lead normal lives, while avoiding them turning into abusers themselves in the future. We need to break this chain of pain.” 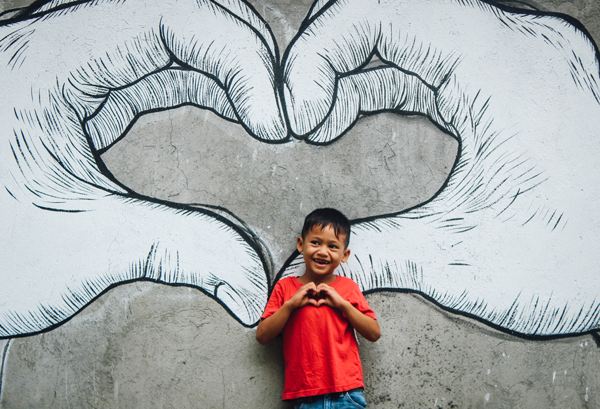 In order to achieve this goal, Kalipay runs two shelter homes in or near to the city of Bacolod, the most populated in the Negros Occidental province, where the rescued children live in a real home: they receive food, clothing and medicines, but also education and therapy. The so-called Haven Home is located in the city of Bacolod and currently houses 20 minors: six babies, six young children and eight adolescents. The other is called Recovered Treasures Home; it is in the city of Bago and currently houses 76 children. There is a school within their facilities and teachers give them classes Monday to Friday. Each home has an administrator, social workers, psychologists, cooks and drivers. But the most important thing is that men and women acting as parents also live there with them. In this way, the children can feel that they are in a real home, receive love and have role models on whom they can rely.

Kalipay’s good work is founded on four guiding principles: “no child should be on the streets; no child should go hungry; no child should be denied education; and no child should be subjected to violence.” Following these maxims, the organization developed a residential care program for children who have suffered – or are at risk of experiencing – any of these situations: abandoned, malnourished or orphaned children, minors forced to work, or victims of physical or sexual abuse, or people trafficking. “The first baby I rescued was living on the street; his feet were burned and he had only ever drunk coffee, never milk. He was less than one year old, maybe eight months. That baby changed my life. I realized that we had to do something to save these children,” Anna declares.

For three years now, Fundación MAPFRE has been financing the Kalipay residential program. “This support has been really important for us. We were going through a bad time and maybe would have had to close, were it not for Fundación MAPFRE,” Balcells states in an interview recorded on video, which can be seen in the digital edition of this magazine.

“In Kalipay we give them a roof and food, but also something very important – a lot of love and affection. We assure them that no one will hurt them again, that we are going to protect them,” she stresses. The rescued children also receive something very important that many of them have never had – Education. “We make sure that all those who are capable can go on to university. We already have six who have graduated, and that is indeed a triumph,” the founder of Kalipay proudly declares.

“What makes you happy? For some, happiness is owning a dream house or automobile, or traveling. Others find happiness in simple things, like spending time with their family, eating a favorite dish or receive a comforting text message from a friend (…). But, do you know that there are children whose idea of happiness could break your heart?” Balcells asks in a letter that can be read on the Kalipay website. “I asked some children what made them happy and these were some of their amazing answers: not being hit for a day; not being seen by the person who molests them; to be treated like a normal child in their own family. With these words, what they mean is that they want to be fed and, from time to time, receive some love and affection.”

For the well-being of the community

The Philippines is a country made up of over 7,000 islands, but most of its population is concentrated on just 11 of them. Over the last decade the archipelago’s economy has doubled, with growth rates of six or seven percent each year. Paradoxically, this has not been reflected in any improvement of the quality of life for most of the country’s population, a quarter of which remains below the poverty threshold. Currently, 26.3 percent of Filipinos live on less than 174 euros a month. Over the years, ever since its creation, Kalipay has broadened its scope of action and work, not just with disadvantaged children, but also with families who need their help. It runs community outreach projects and activities, promoting family values to improve the well-being of all its members and the community in general.