Throughout history, there have been various ways of recruiting troops to fill the ranks of armies everywhere. Slaves, mercenaries, lords who responded to the call of their king with their armed retinue, etc.

Military service recruitment turned to the use of various compulsory conscription systems.  The Quintas [Fifths] – the type of insurance we are discussing here – is named thus for the system of selecting by lot every fifth man to serve their military service in the army.

The Cadiz Constitution of 1812 established compulsory military service for men. Successive laws and regulations on the ‘quintas’ enacted throughout the 19th century also made provision for two ways of evading military service: redemption by way of a cash payment or finding a replacement. The replacement option also called for sufficient money to pay the substitute. In both cases, the price was so high that only the wealthiest families could afford it. 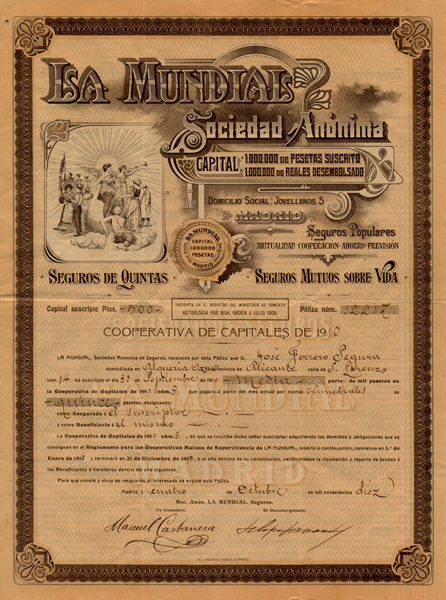 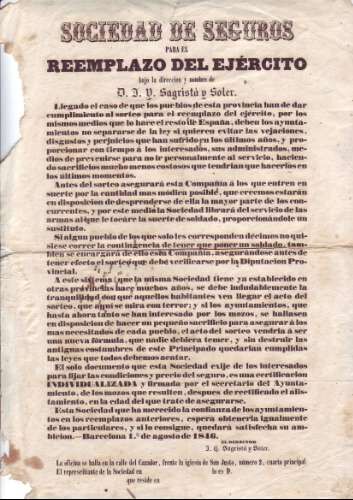 Both replacement and redemption represented a socially unfair system in which the most affluent had the means necessary to avoid military service; meanwhile the humble had no choice but to comply, with the consequent adverse effect on the family income, given their absence at a productive age. Another consequence suffered by the most needy in society was the indebtedness of families who fell into the hands of usurious lenders. They had to endure disproportionate interest rates in an endeavor to raise the cash sum needed for the redemption fee or to pay a substitute.

We must remember that, depending on the historical period, the compulsory military service lasted between three and eight years, that the mortality rate was rather high, and it deprived families of much needed hands for agricultural work, all within a largely rural economy with modest surplus produce. The Spanish population was below the 19 million mark according to the INE (Spanish National Statistics Institute) and, in 1900, life expectancy at birth was less than 50 years.

It is no wonder that, in this scenario, a large number of insurance companies sprang up, engaged – some of them exclusively – in offering ‘quintas’ insurance policies, similar to life savings insurance nowadays. The purpose was none other than to build up the capital necessary for the payment of the redemption fee or to hire a substitute.

The social discontent generated by this redemption/replacement system came to a head with serious riots at the port of Barcelona in 1909. The call-up of some 14,000 reservists who had already completed active service triggered the so-called Tragic Week of public disturbances. Once again, they were forced to leave their homes to fight in Morocco, while those able to pay the redemption fee continued with their lives. These confrontations were echoed at the main railroad stations of other cities such as Zaragoza and Madrid.

The Spanish Law on Military Recruitment and Replacement of 1912 abolished the redemption and replacement systems. As a result, the ‘quintas’ insurance line disappeared, as did those companies whose business was not sufficiently diversified.

Located in Madrid, at Bárbara de Braganza 14, it has 600 pieces on display and a total of 1,300 preserved in the institution’s collection. In addition, all of them can be viewed on a virtual tour of the museum at www.museovirtualdelseguro.com.