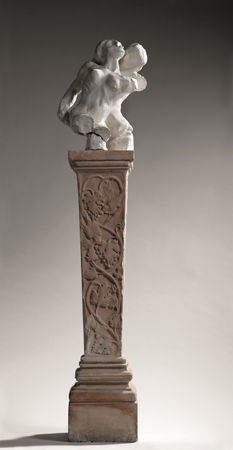 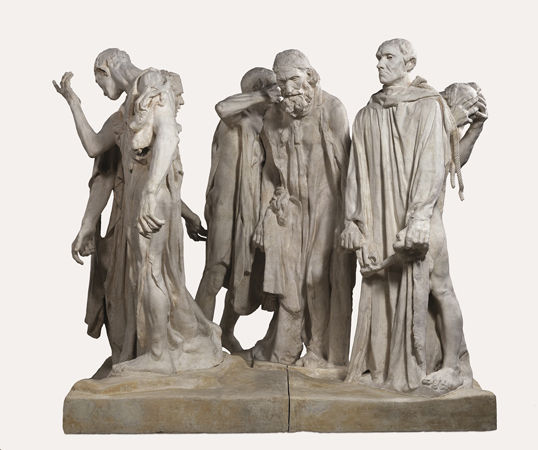 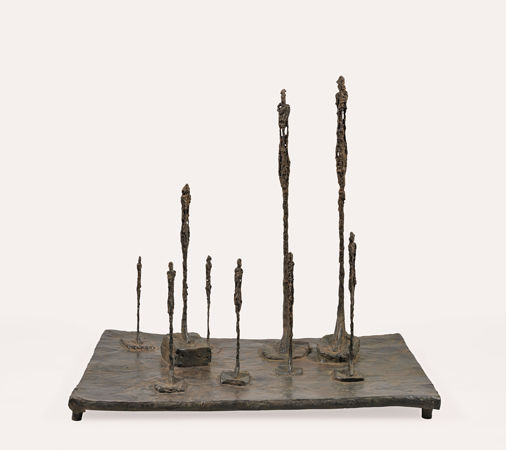 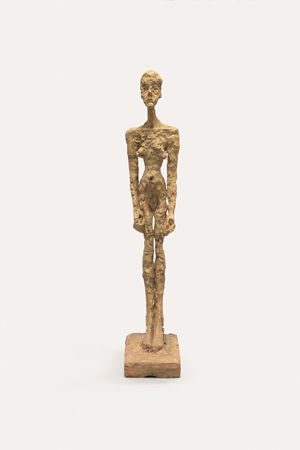 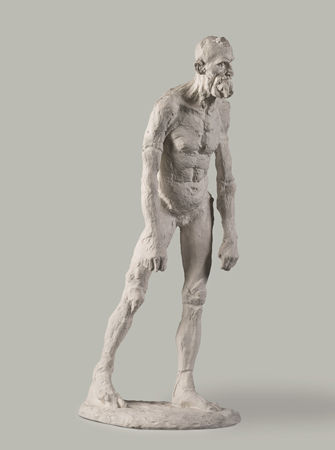 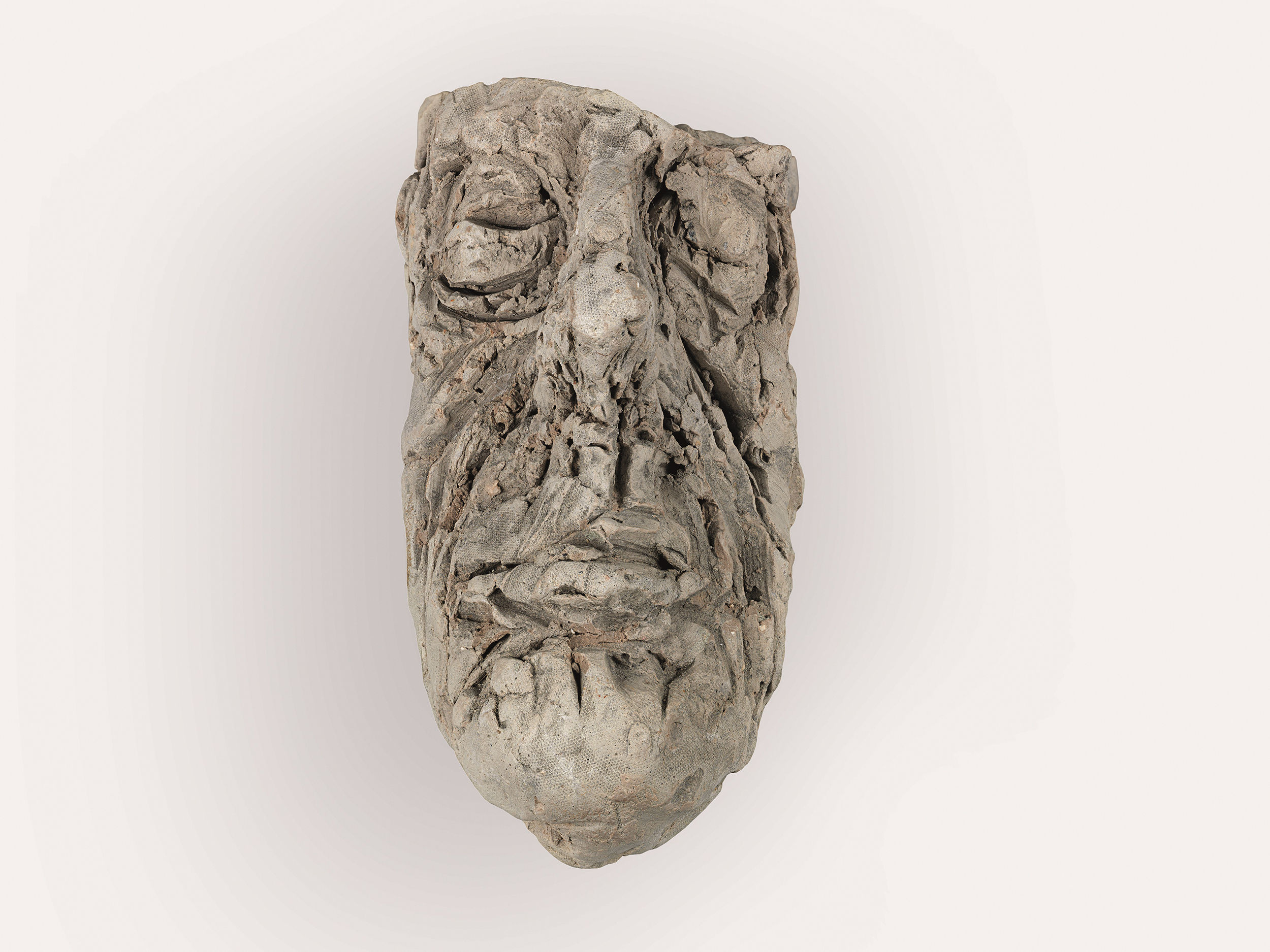 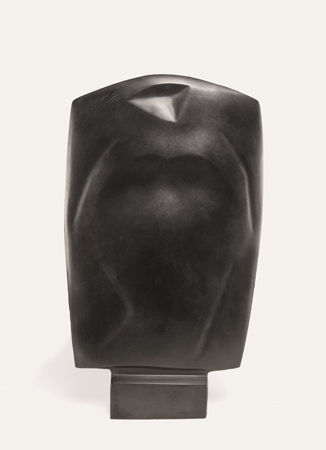 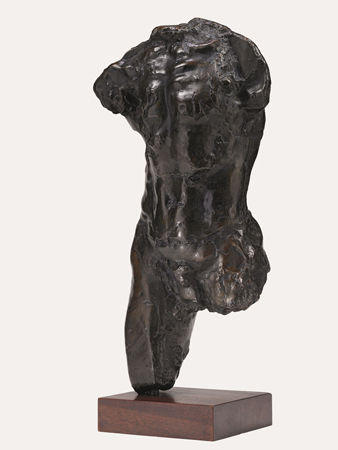 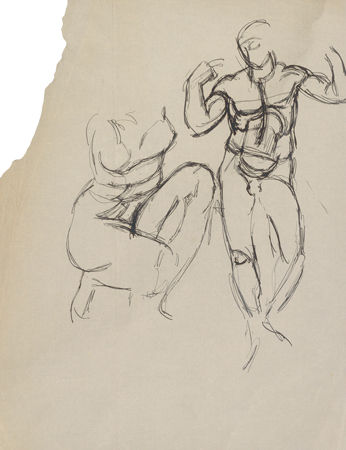 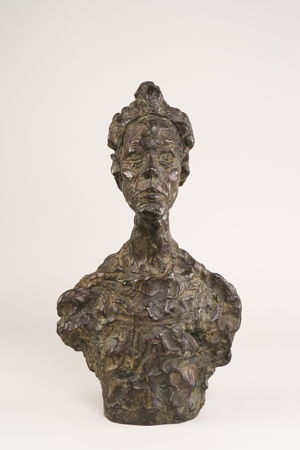 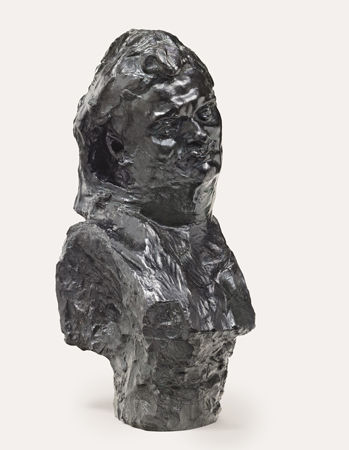 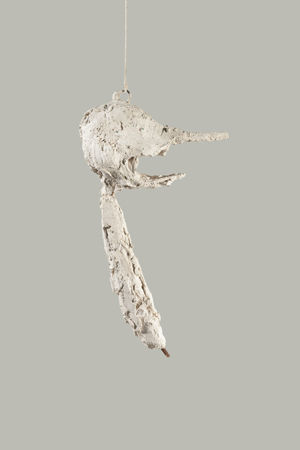 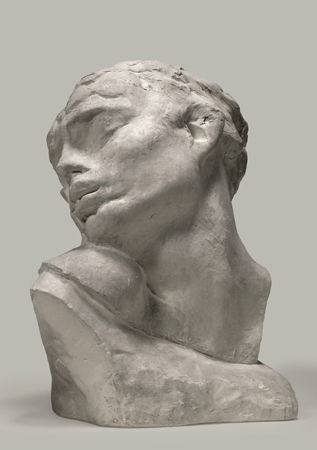 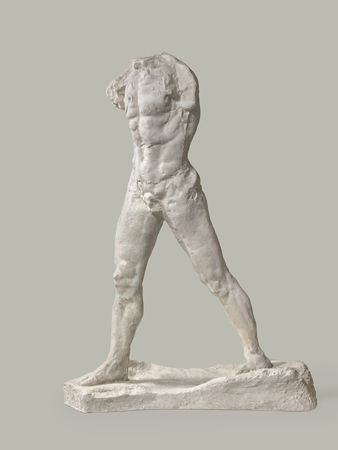 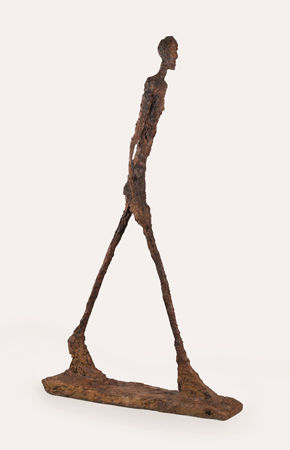 Despite being separated by more than a generation, the creative paths of Auguste Rodin (Paris, 1840-Meudon, 1917) and Alberto Giacometti (Borgonovo, Switzerland, 1901-Chur, Switzerland, 1966) reveal significant parallels, despite the inevitable differences. These similarities are highlighted for the first time in this exhibition organized by Fundación MAPFRE, Madrid, with the collaboration of the Giacometti Foundation, Paris, and the Rodin Museum, Paris.

Added to the fact that their respective works share purely formal aspects – such as, perhaps, an interest in heavily working their materials and accentuated modeling, their concern about the pedestal’s role, and their taste for fragments or distortion, to name but a few – the comparisons that can be drawn go far beyond that. Rodin was one of the first sculptors considered ‘modern’, given his ability – firstly, through the expressiveness of the face and gestures, and, later in his career, by focusing on the essential – to reflect universal concepts such as anguish, pain, anxiety, fear or anger. This is also a fundamental feature of Giacometti’s creations: his post-Second World War works, those elongated, fragile, immobile figures which Jean Genet called “the guardians of the dead”, expressed the full complexity of human existence, totally devoid of any superfluous elements.

Rodin was the undisputed grand master of the 19th century, with hardly any modern sculptor capable of reaching such heights. However, during the avantgarde period, there were many artists who deviated from his approach in order to invent a freer, more modern language, far removed from his, which they felt was traditional in many respects. Giacometti himself, despite admiring Rodin from an early age, turned his back for a while on the French maestro and shifted his attention to new sculptors such as Ossip Zadkine, Jacques Lipchitz or Henri Laurens, to name but a few. However, from 1935 onward, the human figure once again took center stage in his work and started defining the aesthetics by which he was to be essentially identified, progressively taking shape in the years following the Second World War.

On seeking an artistic expression of reality, without relinquishing the personal affirmation of a modern artist, Giacometti quickly came across Rodin’s work. The selection of works, some 200, which make up this exhibition is conceived as an ongoing conversation between the works of these two artists. Distributed in eight different sections, the display is completed with a selection of photographs.This reveals how both creators, in their respective eras, found ways of approaching the human figure that reflected a new personal vision, yet firmly rooted in their time: for Rodin, in the world leading up to the Great War; for Giacometti, the interwar period and that immediately after the Second World War, so marked by disenchantment and existentialism.

Auguste Rodin was one of the first sculptors to tread the path toward reality, because, for him, “beauty lies alone in revelation of truth.” In 1885, the city of Calais commissioned a monument to commemorate the heroic deeds of citizens who, in 1347, after a prolonged siege of the city during the Hundred Years War, offered themselves up as hostages to King Edward III of England. Rodin designed the monument as six independent figures he would later assemble together, striving to maintain the identity of each element, while not losing sight of the big picture. On breaking with tradition – given that, instead of presenting one single character, he sculpted a group of six men advancing, albeit individually, toward their tragic fate – the sculpture was not well received and would not be officially displayed until 1895, six years after the sculptor completed the work.

In the late 1940s, Giacometti became interested in the question of sculptural groups, undoubtedly due to the influence of Rodin’s Monument to the Burghers of Calais. Works such as La Place (Composition avec trois figures et une tête) [The Square (Composition with Three Figures and a Head)], Quatre femmes sur socle [Four Women on a Pedestal] or La Clairière [The Clearing], all three from 1950, show how Giacometti sought the essential nature of the notion of a group.

The creative use of chance or accident was one of Rodin’s major contributions to modern sculpture, as we can see in Homme au nez cassé [Man with a Broken Nose], from 1864. Instead of being discarded and associated with errors and mistakes, pieces of material broken off in fortuitous events during the modeling process are recovered and incorporated into the creative process and the final work, thus affording a different meaning to the sculpture.

This is also manifested in the fissure on the Tête d’homme [Head of a Man] (c. 1936) by Giacometti, or in the cracks of the eyes, and the “slit” representing the mouth of Tête de Diego [Diego’s Head]. It is as though the Swiss sculptor had picked up on this aspect which characterized Rodin’s sculptures and reflected on it, altering its meaning or perhaps giving it an even fuller sense.

Following his Cubist experiments and a Surrealist phase, Giacometti increasingly whittled his sculptures down in a quest for “figures and heads viewed in perspective”, finally producing the type of works for which he would become best known. His characteristic elongated figures then replaced his previous works, with their tremendous technical perfection, and the manipulation and modeling of the material became the key features of his oeuvre. Likewise in the case of Rodin, who sometimes let the clay be glimpsed beneath the bronze, revealing an energetic, vigorous modeling process that, paradoxically, manages to express human frailty. This can be seen in sculptures such as Eustache de Saint Pierre (c. 1885-1886) or the various garments produced for the figure of Balzac.

Rodin’s quest for expressiveness in his sculptures is characterized by the emphasis he places on his figures’ faces, at times acquiring a caricature-like quality. Modeling and assemblage coexist with distorted faces seeking that expressive impact, as is evident in Tête de la Muse tragique [Head of the Tragic Muse] (1895), or in the different versions of Le Cri [The Cry].

Giacometti’s case is rather different, given that the distortion is not – or is not solely – due to that pursuit of expressiveness. After the war, the Swiss artist’s sculptures became increasingly elongated and stylized, and sometimes really small. As the sculptor himself pointed out, that was how he really viewed his subjects. In 1960 he wrote: “The figures are nothing more than continuous inward or outward movement. They are incessantly redone and lack any real substance; that is their transparent aspect. The heads are not cubes, nor cylinders, spheres or triangles. They are a moving mass, [appearance], changing shape and never totally comprehensible.” It is perhaps that incomprehension of reality which led to sculptures such as Le Nez [The Nose] or Grande tête mince [Large Thin Head].

Connections with the Past

Rodin’s relationship with ancient art dated back to his student days at the École Spéciale de Dessin, when he would visit the Louvre to copy the Old Masters, and to a trip to Italy in 1875. The keynote moments on this trip were when he spent some time in Florence, where he discovered Michelangelo’s sculptures, and in Rome, where he admired classical sculptures. This is reflected, for example, in the various male torsos or in the forms of La Méditation sans bras, petit modèle [Meditation Without Arms, small model], produced in 1904.

As for Giacometti, between 1912 and 1913 he began to copy Dürer, Rembrandt and Van Eyck from illustrations found in books belonging to his father. This activity continued later in the Louvre, where he spent a lot of time making copies, especially of Egyptian sculpture. He also traveled to Italy and, at the Musée de l’Homme in Paris he discovered Oceanic, African and Cycladic art. He incorporated all of these influences into his work.

For both Rodin and Giacometti, the process of repeating the same motif was common practice. This was a way to delve deeper into the study of the depicted model and his or her psychology; moreover, such repetition enabled them to keep transforming their work, which seemed reluctant to be deemed finished. This process also transformed the meaning of the final work; having started out from some small detail, it often ended up reflecting universal aspects of existence.

This innovation in the sculptural process – never viewing the work as finished – was, perhaps, one of the aspects that most interested Giacometti about Rodin. On this point, the Swiss artist declared in 1957: “No sculpture can ever dethrone another. A sculpture is not an object; it is a question, an issue, an answer. It can never be either finished or perfect. The issue does not even arise. For Michelangelo, with his Pietà Rondanini, his final sculpture, everything starts all over again.

And, for a thousand years, Michelangelo could have sculpted Pietàs without repeating himself, going back over or ever finishing anything, simply pushing further. Rodin likewise.”.

The integration of the pedestal with the sculptural motif has been one of the major issues facing modern sculpture. When working on sculptural groups with individualized characters, as is the case of The Burghers of Calais, Rodin confronted this question and considered various solutions for the base, enabling him to establish a greater or lesser separation from the viewer. In this group sculpture, it seems that the artist initially attempted to avoid placing the figures on any base at all, as he wanted to incorporate them directly into the pavement slabs. In the end, he had to install this work on a low base. But, with his original intention, Rodin was already anticipating one of the fundamental features of 20th century sculpture: eliminating the base from the Burghers would have placed the viewer and the volunteers trudging toward their death at the same height; in other words, integrating sculpture into the real world and stripping it of its aura of intangibility.

In Giacometti’s work, the pedestal not only serves as a way of isolating the figure and distancing it from the viewer. A small figure on a really tall or wide pedestal makes it look even smaller when observed from a distance. But this is not the only reason for using one or another size of pedestal; it also produces a dialog between base and figure.

In various publications on the French grand master Giacometti copied L’Homme qui marche [The Walking Man] on a page, opposite the reproduction of a work by Rodin, as if reflecting on the motif in order to later express that idea in a work of his own. The versions of The Walking Man by both artists are, without a doubt, among the world’s best-known sculptural works and it is evident that Giacometti was inspired by Rodin to work on this motif.

Compared with that of Rodin, Giacometti’s The Walking Man seems worn and fragile, while the French master’s version is tremendously expressive, revealing the full dimension of human frailty. But, beyond the differences, with this motif both artists tackled one of the essential aspects of sculpture: how to keep the material upright; how to build it up; issues that converge in a reflection on human beings and their ability, both literally and metaphorically, to avoid falling down. In this sense, sculpture, in turn, becomes a metaphor for humanity. And if Giacometti’s The Walking Man is the one that appears triumphant and remains standing in the face of life’s tribulations, The Staggering Man is a metaphor for the precariousness of human existence: two sides of the same coin, two questions and two answers for future generations