Carlos Alberto Ferlise, president of the OAF (Organization of American Firefighters), and Martín Cucalón, its Secretary General, are firemen. But, above all else, they love their profession, which they exercise every day in their respective countries, Argentina and Ecuador. And wherever else they may be required on the American continent. This is what the organization they collaborate with is all about (they are all volunteers, except for the administrative staff ). On its behalf they came to Madrid in order to collect the award from Fundación MAPFRE for the Best Accident Prevention Initiative. Made up of over one million professional firefighters, mostly volunteers, this association covers the needs of 65 percent of the region. It has been doing so for nearly 12 years now, working incessantly and growing at a surprising rate.

What does this award mean to you?

Obviously, we’re thrilled. But, the first thing we want to say is that we’ve come here on behalf of the millions of firefighters on our continent. For all of them, men and women alike, this award will motivate them to keep going. This award is for the firemen and women on duty 365 days a year, with no days off, not even Christmas or New Year. But it’s something we gladly do, as this is our passion. We generally start out at a very young age, practically as teenagers. It’s true that we come face to face with the suffering of others in our work, but our profession strives to make our cities safer, while attempting to protect the environment.

What is the most rewarding aspect of your work?

The most gratifying thing is when you leave the scene of an emergency and see that your people have done a good job, thanks to the training and equipment they have received. Completing emergency work of any kind, in which firefighters from several countries have participated, leaves you feeling at ease, satisfied with what you’ve accomplished thanks to this combined force of American firefighters. OAF has distributed many donations for training and equipment from countries with greater resources.

What does that collaboration entail? Give me an example.

For example, if there is a forest fire emergency in Argentina, we have a direct line to firefighters in other countries in order to seek or offer help. 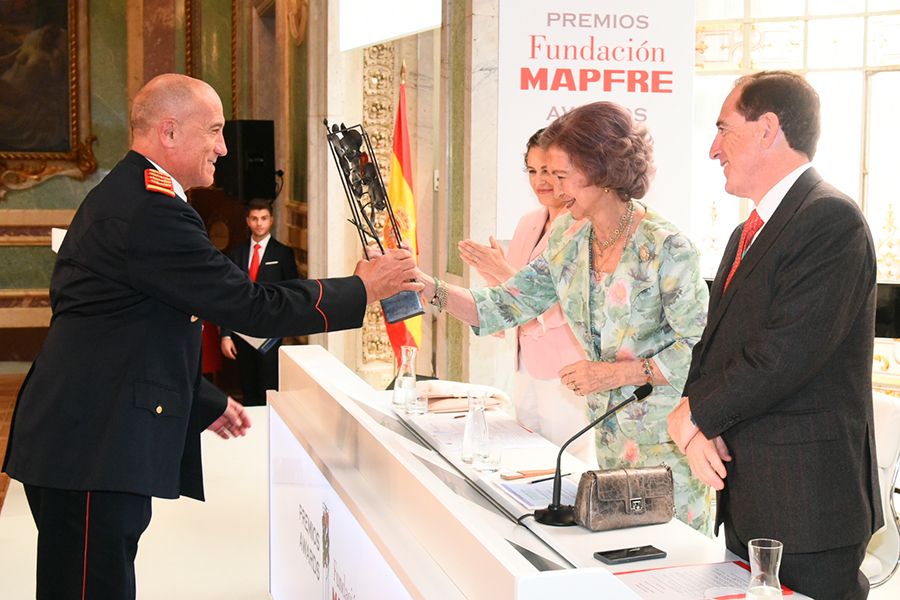 So, one of the key factors is the collaboration between different countries…

Correct. The idea is to do away with borders. If you need a fire investigation instructor, you simply pick up the phone, call any country where there is one, ask them and they send you one.

But there is not just training for fighting fires, but also in fire prevention. That is really important.

Indeed so. Prevention is the best way to reduce risks. Without prevention, no progress can be made as regards reducing risks. And we must start educating people right from childhood. Fundación MAPFRE helps us with many campaigns. For example, in Ecuador we have reached 150,000 children and taught them how to prevent emergencies, as well as what to do if there is one. The infant mortality rate in Latin America due to fires is really high.

And another noteworthy aspect of this international work?

The standardization of protocols and training. And the elimination of borders with their respective bureaucracies. These are often a real problem, as you cannot enter a country despite the fact that there’s an emergency. We have an agreement to skip permissions, which can often delay sending or receiving aid by up to a day. I feel that the virtual academy you have set up is most interesting. The result has been surprising. We didn’t expect it. Many countries have reached the figure of 8,000 who have finished their training. And we believe this must continue, as they are so keen to learn.

And there is always more to learn…

That’s true, because fires nowadays are not like those of 50 or 60 years ago. With technology, everything has changed, even disasters. Today’s materials can produce toxic gases, for example. There are also electric cars, with a whole new technology. So, we need to learn how to rescue people from these vehicles without risking electrocution… And it’s the same with elevators, etc. We never cease training and specializing in order to not only protect citizens, but also to protect ourselves.

What is the future of the OAF?

It’s going to keep growing. More and more fire departments want to join us, not just as countries, but also as independent organizations. And that’s great because we have a lot to do.