O dentista do Bem Project by Turma do Bem

A smile opens the door to the world for you. That is the philosophy behind the winning project of the Fundación MAPFRE Award for the Best Social Action Initiative. The Brazilian organization Turma o Bem and its founder, the dentist and social entrepreneur Fabio Bibancos, have been literally sowing smiles since 2002 among those who do not feel like smiling. What started as a modest initiative of 15 Brazilian dentists, today brings together over 17,000 dental professionals who provide free care to 71,000 children in 14 countries, thus constituting the largest network of specialized volunteers in the world. Its objective: to facilitate the social inclusion of these children thanks to dental care.

How did Turma o Bem come about?

It was a bit by chance. In the late 1990s I wrote a book, Um sorriso feliz para seu filho (“A Happy Smile For Your Child”), on the prevention of dental problems among children. As part of the book’s promotion, I gave several talks in private schools, which is where people who have money in Brazil send their children. Later, the publisher started organizing talks for me in public schools as well. I conveyed exactly the same message there without realizing that I was addressing people with far fewer resources. At the end of my intervention, parents approached me and told me that they understood the need to prevent oral problems in their children, but that they had no money to do so. I saw those kids, children with missing teeth, pain and a great many problems. That was when I decided to take some of these neediest cases to my clinic. Shortly after that, I was joined by several colleagues and, before we realized it, the project had grown into an organization extending the length and breadth of Latin America.

Is dental care indicative of a country’s level of development?

Absolutely. Clothing, accessories and other consumer products mark the difference between rich and poor, but these are really not such major differences. More or less everyone can have access to certain basic consumer goods, but that is not the case with dental health. But when we see a person with missing teeth, we know for a fact that we are contemplating a poor person. A person without a smile is condemned to exclusion from work and social relationships, is not going to eat, is not going to kiss… They are denied any possibility of happiness.

So then, your project is not just a question of health

No, it is a health project. But what it truly seeks is to achieve social inclusion for people through dental health. Because people with missing teeth are excluded from everything. Our goal is to sow smiles around the world and thus give them back health, joy and hope. 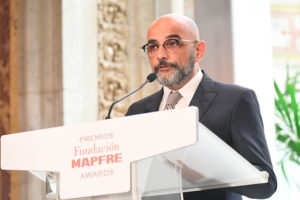 What groups receive your special attention?

Nowadays, we are working primarily with three groups. First of all, with deprived children aged 11 to 17 with serious dental problems. We are also treating women who have been victims of gender violence, and lost their teeth in situations of violence. Finally, transsexuals who have lost teeth in situations other than those of domestic violence, sometimes at the hands of the police.

What does being “the best dentist in the world” mean to you?

“The Best Dentist in the World” was the way we tried to draw attention to many dental professionals who are doing great work on behalf of society at large and their particular city. For us, the best dentist in the world is the one that makes the greatest impact on the oral health of their community. And not only through the work in their office, but also by obtaining medications and, in general, everything a child needs to enjoy full health. These professionals are highly committed and give so much more than what is asked of them. That’s why they are the best dentists in the world.

How many people have you helped?

I don’t like talking about numbers, as they are rather large and sometimes misrepresent the social work. Many organizations work with impossible numbers and the child ends up being just another number. Roughly speaking, we can say that, as of today, our organization is providing treatment, at any of various stages, to 71,000 people. However, much remains to be done.

What must a person without financial means who needs dental care do?

They can write to us on Facebook or through our website. We will then reply to their message and attempt to find an organization that can help them with the care or treatment they need, perhaps even immediately if they are in one of the countries where we are present.

What has this initiative meant to you on a personal level?

All this took me by surprise. I had no qualifications, training or prior experience in social services. A dentist’s life is a good life. I have a family, I’m a father, I have a house, a car… And it’s fantastic. But I believe the best part of life is this, having the chance to help so many people. For me this is a way to give true meaning to life.