Physical activity and the workplace: on the health podium

An ever-increasing number of companies are implementing programs to promote physical activity among their workers. And they get back much more than they put in. This was discussed at the 2nd Health and Company Forum organized by Fundación MAPFRE, which was attended by the Spanish companies Cofares, Mahou San Miguel and Red Eléctrica Española.

“When I see an adult riding a bicycle, I no longer despair for the future of the human race.” This quote from the writer H. G. Wells sums up the opinion of many health and sport professionals, a winning combination in the workplace too. The reasons for this are very simple: physical activity has many benefits for our health and well-being. On the contrary, a sedentary lifestyle is linked to obesity and to a whole range of rheumatic joint complaints, hypertension, cardiovascular disease, respiratory diseases, diabetes mellitus, cerebrovascular disease, and osteoporosis. This is the view of the American College of Sports Medicine and the American Heart Association.

Carmen Atero Carrasco, adviser to the President’s office at the CSD (Spanish Sports Council), is of the same opinion: “It is clear that health is intimately linked to physical exercise. And a very high percentage of the population does not take any exercise on a regular basis.” All this in a country with one of the highest rates of absenteeism in Europe. Last year 4.5 million workdays were lost in Spain, which means that goods and services to the tune of 64,603 million euros were not produced or provided. Fortunately, ever more companies are aware of this close relationship. And they are ready to encourage their employees to be physically active on a regular basis. And, according to Ms. Atero, there should be even more of them, bearing in mind that: “each euro invested produces a saving of three euros in prevention in the future.”

In most cases, it is the large companies which take seriously the need to tackle the sedentary lifestyle of their employees. For example, the electricity supply company REE (Red Eléctrica Española), where the initial goal of its executives was to achieve a good work environment. Its Health & Safety Coordinator, Victoria Marín Úbeda, explains: “At first encouraging the practice of sports in REE (tournaments, padel tennis, cycling trips) was a communication and integration tool for after-work activities, designed to improve the work environment and interpersonal relationships.” Support was offered in the form of economic aid for those who participated in the various sports groups. With the development of the Healthy Company model, sport went on to become another company strategy for improving health. They currently offer talks, awareness programs, internal communication and sporting events, in addition to undertaking individual initiatives to identify particular needs in the state of health of each worker: “In that sense they are provided with personalized proposals and periodic evaluations, in which exercise can have a positive impact.” 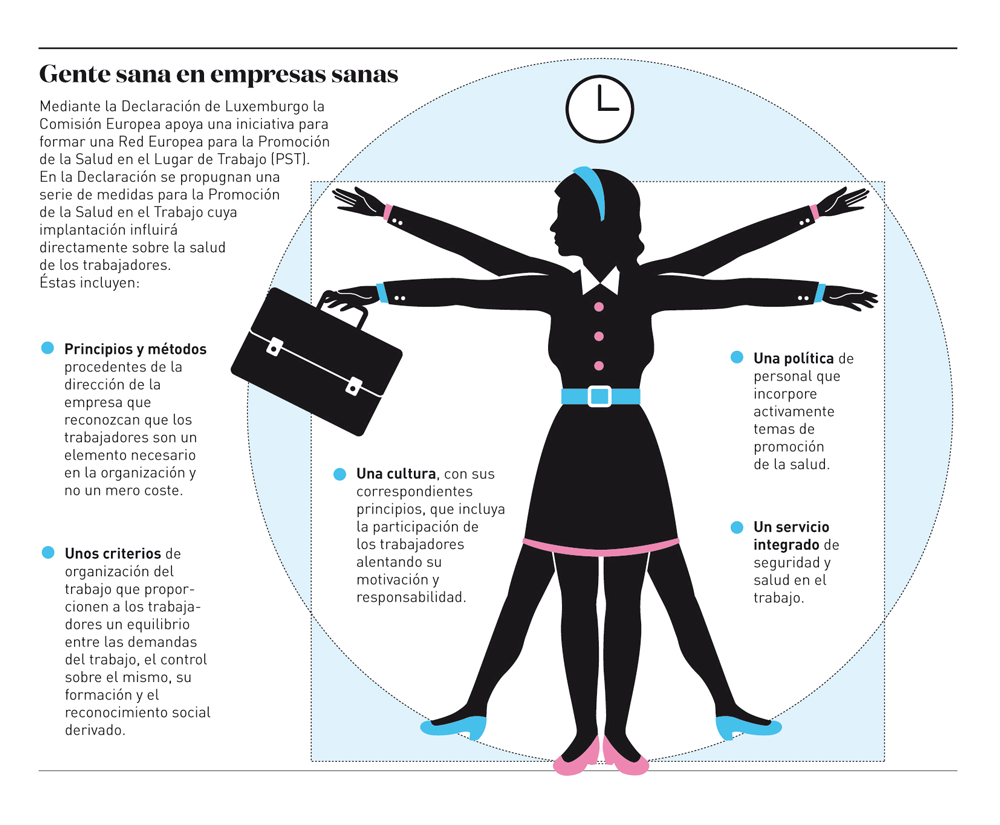 «It is clear that health is intimately linked to physical exercise. And a very high percentage of the population does not take any exercise on a regular basis»

Personalization is also one of the strong points of A tu Salud [For Your Health], the program run by the brewer Mahou San Miguel. Manuel Palencia, its head of Health & Well-Being explains it thus: “The health of individuals attained and certain specific functional tests added (anthropometry, maximum heart rate and blood pressure, body composition and energy expenditure, consumption of oxygen, test of strength and elasticity, functionality test of the spinal column) allow the recommended dose of exercise to be prescribed (intensity, duration and weekly sessions), both aerobic and toning exercise. This is a program scheduled for 24 weeks with periodic controls. At the end, an assessment is made and new goals are set.” The activity can be undertaken at the Health Workshops set up within the company’s head offices or at subsidized sports centers.

In the same fashion, the drugs distributor Cofares possesses a comprehensive sports club that is not limited to coordinating and running the sporting activities of its personnel. Rather, it functions as an activity, training and advice center for all things related to health, physical fitness, nutrition, etc. The response of the workers is proving really positive, with enrollments increasing each year, which is a success story for those in charge at Cofares. In the words of Angel Javier Vicente Pérez, its Human Resources and General Services manager: “Not only has it served to promote sport among our employees, but also to generate spaces for informal communication, furthering mainstreaming through mutual knowledge, helping to foster teamwork, improve the work environment, etc. I sincerely believe that the company has gained a great deal with these organizational well-being policies.” And it has done so, not just for the present, but also thinking of the future: “In the current situation, given the future problems as regards collecting a pension – due to the aging Spanish population (in a couple of years we are going to be the second oldest country in the world, behind Japan), the low birth rate, and the difficulty in the rotation of workers – we must ensure that our employees reach retirement age in the best possible condition. I believe it is an obligation for the companies, going far beyond the occupational health and safety regulations,” concludes Mr. Vicente Pérez.

Everyone benefits from this projects

Of the same view is Ms. Marin Úbeda, for whom this type of project is “a social need”. She argues: “Given the progressive increase in cardiovascular risk factors and their associated pathologies, as well as the number of cancer cases and complaints that are psychosocial in origin, without forgetting the high degree of sedentary work, it proves necessary to adopt measures that encourage physical exercise to enhance our health.” Even more so when experience shows that everyone benefits from these projects – employers and workers alike.

The head of Health & Safety at Red Eléctrica Española is clear about this: “The company gains personnel who are healthier, happier and more committed to the organization. I’m convinced that this set of measures is extremely beneficial for individual workers and, by extension, their companies, where people are the principal asset.” Manuel Palencia is of the same view: “For Mahou San Miguel this is a great investment, given that it has a major impact on the reduction of absenteeism and increased productivity.” And something else: “Intangible factors such as motivation and personal satisfaction. This means that they perceive the company as the best place to work.” So much so that the ROI (Return On Investment) is between 2.2 and 2.9 euros, according to a study conducted by the company on its Physical Activity & Health program. This same study revealed that 94 percent of the participants believed that their health and physical condition had improved; and 86 percent that their emotional well-being too.

FEMEDE (the Spanish College of Sports Medicine) produced a report on this subject entitled Sport in the Workplace. It states that regular exercise can bring great benefits to both the individual and the company, such as stress reduction and an improvement in depressive states. Of course it also deals with the reduction of sick leave and absenteeism, and enhancing the work climate. Now all that remains is to make companies understand this and set about promoting it. There is a lot to be done yet.

In order to ensure that an increasing number of companies promote healthy habits among their workers, Fundación MAPFRE has designed the Choose Health program in order to facilitate tools completely free of charge that help design, implement and run continuous health promotion programs. Antonio Guzmán, manager of Fundación MAPFRE’s Health Promotion Area: “The program was officially launched in January 2017, following a test phase throughout 2016. Despite its short life, over 20 companies have already signed up, although we expect a significant growth in this number over the course of this year. Our objective is to provide an excellent service to all the companies in the program and increase the number of firms participating and the catalog of services.” Yet always bearing in mind that each company has to start up its own program, in keeping with the personnel on the payroll and their relatives, the type of business activity and how to engage the workers. “The most important thing is consistency, in other words that the activity actually takes place and continues over time,” Guzmán concludes.