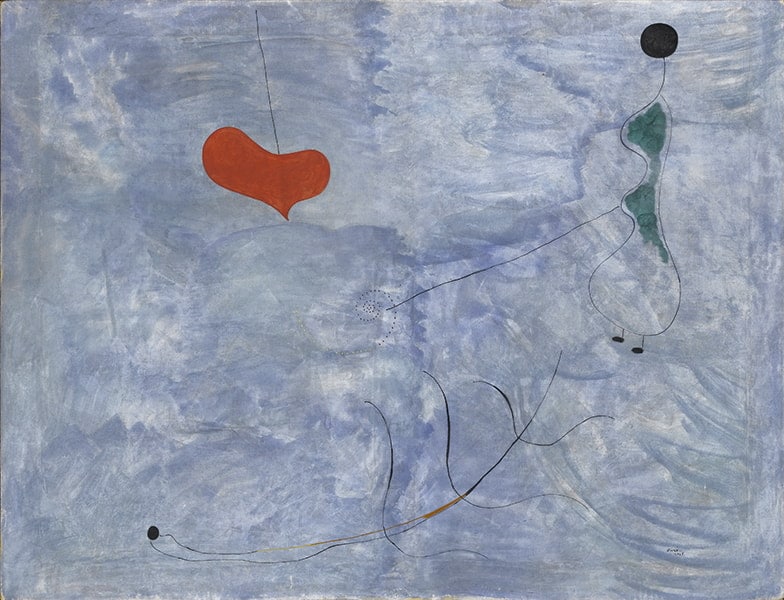 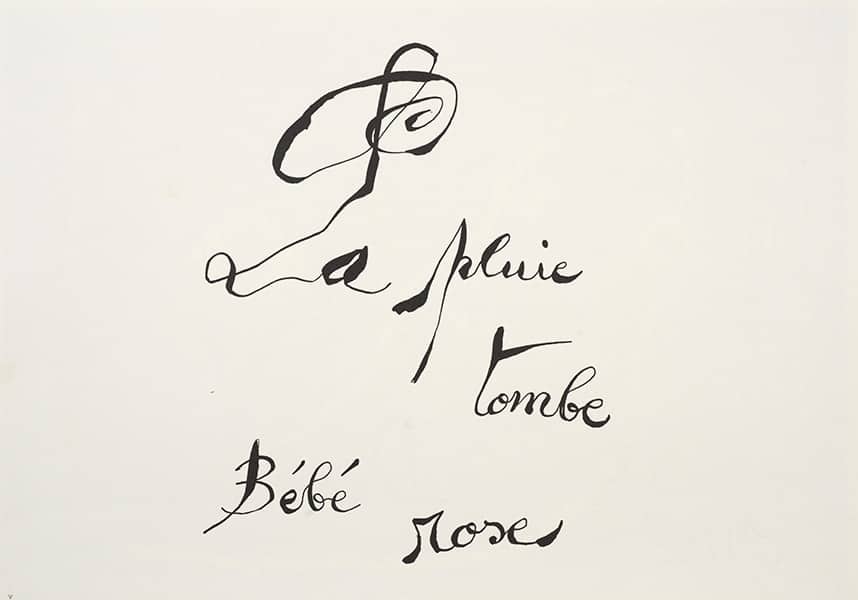 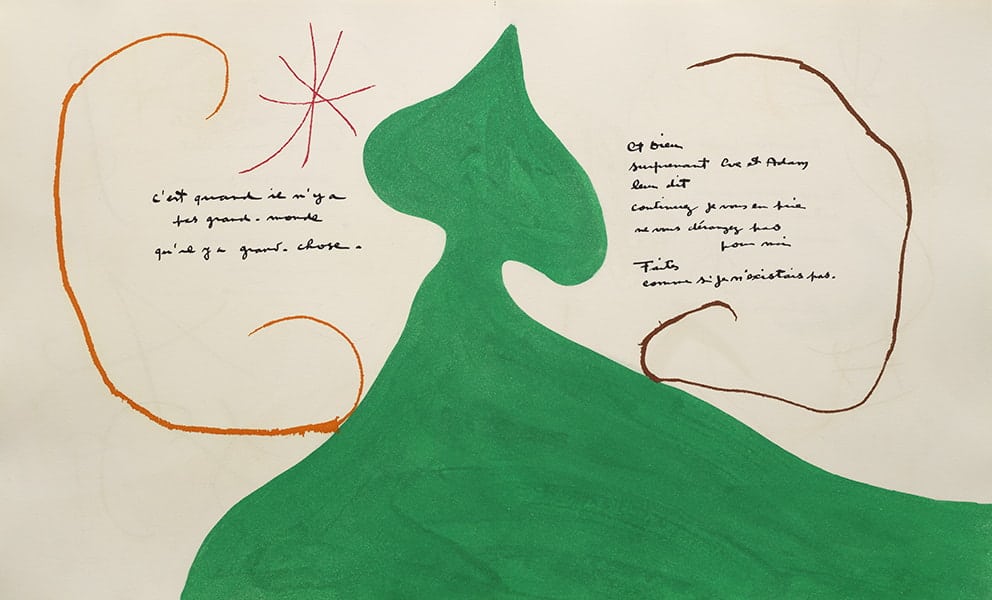 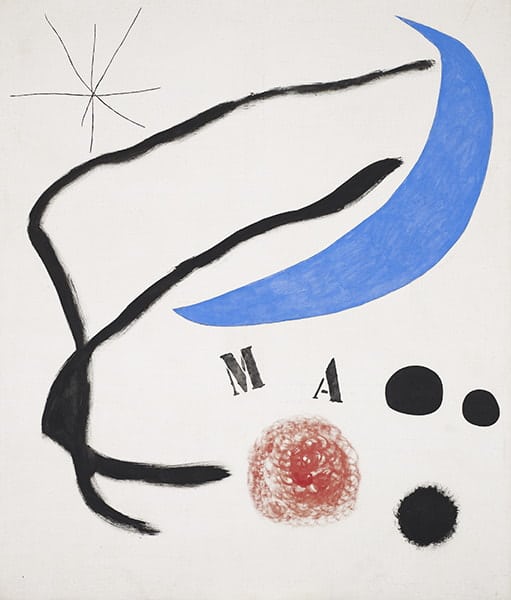 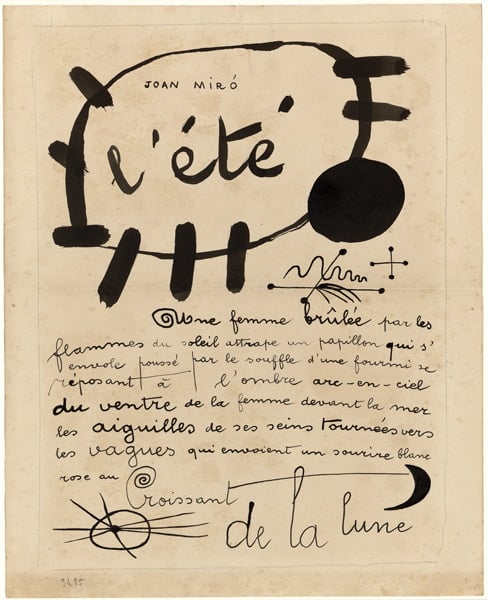 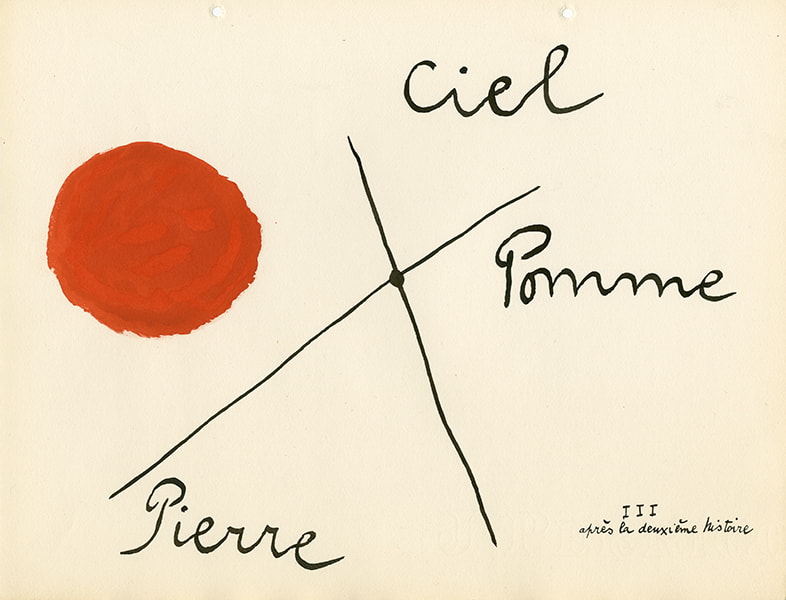 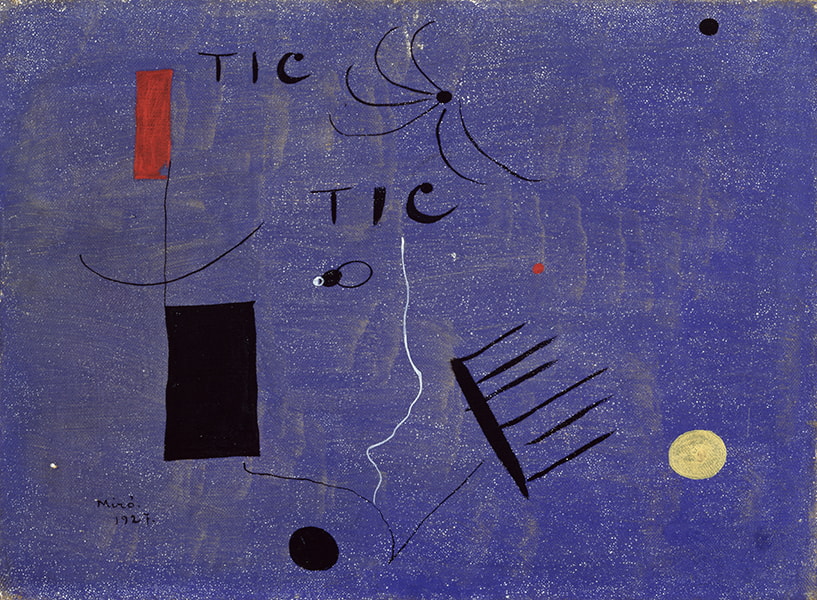 From June 3 through August 29, 2021 FUNDACIÓN MAPFRE’s Recoletos Hall in Madrid will be hosting Miró Poem. This exhibition attempts to decipher the role of poetic writing in Miró’s career and analyzes the close rapport the artist established with various writers and men of letters of his time. The exhibit was organized by Fundación MAPFRE with the special collaboration of the Joan Miró Foundation, Barcelona.

“I make no distinction between painting and poetry,” Miró once declared. This statement is applicable to the whole output of an artist who always sought ways to transcend painting, to push its boundaries. And, in poetry, he discovered the most profound, enduring way to achieve this. Throughout his career, he tried out various ways to incorporate the poetic word into his work, striving to render the methods employed by writers into the languages of painting, from his ingrained conviction of the “extremely disturbing nature of a written page.”

By means of a selection of paintings, drawings, illustrated books and handwritten poems, this exhibition attempts to clarify this connection through two distinct, yet parallel, lines. As its curator, Carlos Martín, points out: “One, more complex and speculative, which seeks to unravel the role of poetic writing in his concept and practice of painting from the 1920s up to his later works, both conceptually and literally. And another, more direct one, which refers to his numerous collaborations with various poets, in a continuous exchange between word and image, between linguistic signs and pictorial brushstrokes.”

Visitors are first led into an introductory room featuring a selection of drawings, poems and the 1917 Nord Sud painting, the first in which the written word appears in Miró’s work. The next stop presents a selection of books from the artist’s personal library. After this introduction, the exhibition unfolds into a series of four sections.

Miró takes on literary and poetic text and tries to translate it into a plastic form: this is his way of drawing closer to the way poets approach their work. He does not expect immediate comprehension, nor shortcuts; he accepts the difficulty and seeks confrontation, until “the spark” is lit, the light that enables him to address the text. The moment of lucidity that shows him how to proceed. That planted the seed for his work between 1924 and 1928, which closed precisely with his first work for an illustrated book: the children’s poetry anthology Il était une petite pie [Once Upon a Time a Little Magpie, 1928], by Lise Hirtz (1928).

The artist arrived in Paris in 1920 and came into contact with André Breton’s Surrealist circle through the painter André Masson, with whom he shared a studio on Rue Blomet. This was when he strayed from the detailed, meticulous painting of his early years toward a style in which the rules of strict representational painting are broken. His interest in poetry became increasingly evident. From 1924 onward he experimented with compositions based on figures floating against an ethereal backdrop, often blue in color. Miró was able to fulfill his longtime desire to be a painterpoet by applying to these works the mechanism of distilling language into bare words, something many of the poets he knew were putting into practice. The artist usually started with detailed drawings, slowly stripping them down to the final version for the canvas. Moreover, those figures that seem to form constellations have all the traits of the practice of automatic writing and random relationship of ideas that André Breton and Philippe Soupault experimented with in a pioneering fashion in their text Les Champs magnétiques [The Magnetic Fields].

It is likely that Rubén Darío’s poetry anthology Azul [Blue] also inspired him in this period, especially as regards the preeminence of that color on many of these canvases and, in general, in his quest for synesthesia. Blue is one of the colors of mysticism, also associated with sleep, sky and the depths of the oceans. This color, upon which pictorial elements and signs are arranged in a seemingly haphazard manner, determined some of his most ascetic paintings, stripped of almost everything accessory and reduced to the fundamental, such as La sieste.

Brushstrokes for writing and rewriting

Returning to a work begun many years before was not something that bothered Miró; indeed he did so on several occasions throughout his career. Works created over time, retouching and removing elements, which ended up being something else, as though he were rewriting them. This is the case of L’Hirondelle éblouie par l’éclat de la prunelle rouge, [The Swallow Dazzled by the Glare of the Red Apple, 1925-1960], whose initial date coincides with the years in which the painter was clearly interested in poetry. What he did with this canvas is a practice that resembles the way he approached some of the workbooks and books he illustrated. His first project to produce an artist’s book ran from 1936 to 1939. He remained in Paris throughout that period, unable to return to Spain as the Civil War intensified there, and had little space to work in and scant painting materials and tools. It is perfectly normal, then, that he turned to drawing. For the first time, alongside his drawings, there appear poems written by himself, in a style reminiscent of the best Surrealist poetry. Despite his intentions, this project would never see the light in its definitive form, yet it laid the foundations for another: Miró’s first solo work in which he no longer supported the texts of another author, but rather his own in Le lézard aux plumes d’or [The Lizard with Golden Feathers, 1971].

In the 1960s, through his brushstrokes, the graphic symbol was already fully integrated into Miró’s painting, but this is a visual language not linked to any tongue, free and without codes, as can be seen in Écriture sur fond rouge [Writing on Red Background, 1960]. Nor did he want the conventions of the texts he illustrated to fully condition the drawing or vignette he was making. He added scenes and symbols to Parler seul [Speaking Alone, 1948-1950], by Tristan Tzara, and images we are unsure whether to accompany or underscore to À toute épreuve [Proof Against All, 1958] by Paul Éluard. A book that was also produced over many years, at least in its definitive illustrated version, and finally published in 1958, given that Éluard had died six years earlier, in November 1952. The fact is that Miró does not merely want to illustrate, but rather give a broader meaning to the text, expand it and offer a new perspective, so his drawings can be another verse added to those of the poets.

Returning to a work begun many years before was not something that bothered Miró; indeed he did so on several occasions throughout his career

In 1968 Miró tackled a series of rather unusual works in his career. Large canvases on which he laid out stenciled letters and numbers which swarm over a diaphanous background reminiscent of the blue tones he had used before. Lettres et chiffres attirés par une étincelle IV [Letters and Numbers Attracted by a Spark IV] and Lettres et chiffres attirés par une étincelle VI [Letters and Numbers Attracted by a Spark VI] are fine examples. Miró’s flirtation with Surrealism is well known, as is his interest in Dada; inspired by ‘Parole in libertà’ [Words in Freedom] by the Futurist Filippo Tomasso Marinetti, he proposed composing poems on the basis of automatic associations. In 1942 the founding principles of the Lettrism movement, which followed up on these ideas, advocated using letters as ‘sounds’ and, then, as images. In this way poetry became music and writing turned into painting. In the case of these works by the Catalan artist, the stenciled letters turned into painting, or maybe the canvas is already the medium for the poem.

At that time, the years following the May ’68 riots, Miró turned back to one of the most important characters of his beloved playwright Alfred Jarry, Ubu, with his irreverent, foulmouthed nature. He takes him out of context, far removed from the original text of his creator. He published two books based on the character, as though there was no difference between painter and poet: Ubu aux Baléares [Ubu in the Balearics, 1971] and L’enfance d’Ubu [Ubu’s Childhood, 1975]. These publications, based on irony, puns and automatic writing with double meanings, are clearly related to his other aforementioned artist’s books – the notebook dating from the period between 1936-1939 and Le Lézard aux plumes d’or.

At the same time, Miró also collaborated with Spanish writers such as Joan Brossa, one of the major exponents of visual poetry and open to all kinds of creative disciplines, not limited to literature alone. Together, among many other projects, they worked on Tres Joans. Homenatge a Joan Prats [Three Joans. Tribute to Joan Prats, 1978], where the challenge was to defy the traditional configuration of text and its relationship to illustration.

From Poetry to Poem

In the late 1960s Miró took a look back, in a way that was normal for him, and once again contemplated poetry from a painting standpoint. The struggle with words had come to an end. Those works that started from poetry, yet still retained ‘painting’ in their title in the 1920s, now literally became poems.

This is the case of Poème III [Poem III], (1968) and Poème à la gloire des étincelles [Poem to the Glory of Sparkles, 1969]. The former, which forms part of a triptych, is preceded by a series of simple sketches and drawings to which, as Carlos Martín points out, one of the fragments of the letter Miró sent to Leiris in 1924 could be applied. This missive is fundamental to understanding the Catalan artist’s conception of poets and literature, as well as the role they both play in his work. He wrote: “I insist that my most deeply moving works are those that are simply drawn, with a few small dots of color or a rainbow. These move us in the elevated sense of the word, like a child crying in the crib.”

The latter, as the title itself indicates, shows a series of sparks and black lines that form profoundly gestural spirals as though they had arisen spontaneously, like a flash, as is often the case with the idea that inspires a poetic text.

In parallel to these works, we see how Miró applied this language that was already unprejudicedly poetic, yet still plastic, to his later books. Firstly, Jacques Prévert’s last poetry anthology, Adonides [Adonis, 1975], for which he used plates conceived in the 1930s. Secondly, Càntic del sol [Canticle of the Sun, 1975] by St. Francis of Assisi, where the mystical meets the worldly, both in the drawings and in the text, in a union that summarizes the opposing poles around which Miró’s work always revolved, right through his career.