At a slower speed, fewer deaths

The Slow Down campaign, to which Fundación MAPFRE has signed up, insists that whether or not people respect the speed limits in areas with vulnerable road users can mark the life of a person, a traffic accident victim. Ana Novella Reig, president of Stop Accidentes knows this from personal experience.

Two facts are essential for understanding the importance of the United Nations campaign, Slow Down: in a traffic accident, the severity of the injuries depends mainly on the speed of the vehicle; seven out of ten people do not respect the speed limits in areas with vulnerable road users. It is difficult to understand to what extent these two statements can mark the life of a person, a traffic accident victim. Save where it is told in the first person. As Ana Novella Reig does.

She still gets emotional when she relates the event, even though nearly 16 years have passed since then. “It was October 27, 2001, a Saturday morning. My husband took the children (Jorge, aged 9, and Pablo, aged 5) for a walk in the city center of Valencia, where we live. When they were heading home, he stopped at an intersection, waiting for the walk light to turn green. Suddenly, he heard a squeal of tires and saw a car approaching them at full speed running a red light. He pushed our elder son away from the danger, but he only had time to grab the little one by the hand. The car mounted the sidewalk and knocked Pablo down, wrenching him from his father’s grip and killing him on the spot.” In the vehicle were two kids without a license; at the wheel, a minor. But that was not the worst thing. “They were doing over 95 km/h on a two-lane street,” says the president and delegate in the Valencian Community of Stop Accidents, a non-profit organization she heard about shortly after losing her young son. “As soon as I contacted them, I realized that their cause was my cause. And I decided to get involved as a volunteer.”

That cause is none other than striving to make the general public aware that most accidents could be avoided. “Society has assumed the fact that there is a series of deaths each year in traffic accidents; they are just things that happen. But we must not accept this…” And one of the best ways to avoid this complacence is simply to respect the speed limits.

In a traffic accident, the severity of the injuries depends mainly on the speed of the vehicle

Slowing down saves lives Hence Save Lives #SlowDown, the name of the United Nations (UN) campaign coordinated by the World Health Organization (WHO), and supported by Fundación MAPFRE with an intense social media campaign which spurred the collaboration of its employees all over the world. Because, as stated on the United Nations website, www.unroadsafetyweek. org: “Speeding is a major risk factor. The more your speed, the higher the risk of a crash, as well as the severity of crash consequences. Speeding also affects other road users, such as pedestrians or cyclists. Slowing down is safe.” 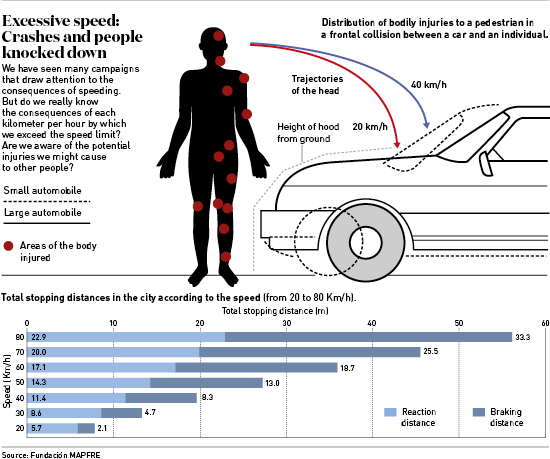 Ana Novella Reig knows this from personal experience, but also from what they see in the association: “In nearly 90 percent of traffic accidents, excessive speed is a factor. Even where there is alcohol or drugs, there is also speeding, precisely because of the euphoria that these substances produce in drivers. In other cases, the causes are related to driver distraction. But a distraction at a controlled speed or at excessive speed can mark the difference between life and death.” We can be that categorical.

Backing up this conclusion is pure physics: “The lower the speed, the less kinetic or motion energy will be supported by both the vehicle and the driver or passengers. Therefore, in the event of a collision with another vehicle or a static object, such as a tree or a wall, less energy will be released. Part of that released energy will be absorbed by the objects involved in the collision, and part by the human body, causing injuries.

The human body is vulnerable and is only able to withstand a certain amount of energy without suffering serious injuries,” according to the UN. But another factor to be borne in mind is that the lower the speed, the less distance is traveled while decisions or actions are taken to prevent a possible collision: reaction distance. In the same way, when traveling at a lower speed, the vehicle will need less time to stop when braking: braking distance. On the other hand, at greater speed, less lateral visibility.

“Society has assumed the fact that there is a series of deaths each year in traffic accidents; they are just things that happen. But we must not accept this…”

Respecting the rules means respecting others

All this takes on special importance when speaking of areas frequented by vulnerable users, where speed limits are usually lower than on other urban streets, given the vulnerability of pedestrians, particularly children and elderly people. However, a study presented by Fundación MAPFRE last May shows that vehicles driving along these streets seldom respect the maximum speed limits in place there. And that, when the speed limit is lower, the degree to which speeding exists is greater.

Ms. Novella Reig believes that one of the main reasons for this lack of respect for the rules is this: “We think we are immune, we never think anything is going to happen to us, because we are good drivers. But maybe others are not such good drivers; or maybe we can be distracted.” That’s why Stop Accidents insists that “the rules are there for a reason. It’s not hard to drive at 80 km/h when the signs tell you to. There is very little difference in travel time, and what matters is getting there.”

And she adds: “Respecting the rules means respecting others.” She says this from the perspective of one who has suffered a truly dramatic situation: “My son was not sick or crossing incorrectly, nor was he where he should not be. My son was killed. Over time you learn to live with this new situation that has changed your life: the one you had went up in flames. You can learn to live again. But as for getting over it, you never get over it.