Young people are starting to say NO! to danger

Young drivers are calling for greater sanctions for drug use and a zero blood alcohol level. This is one conclusion drawn from Fundación MAPFRE’s latest road safety report, which highlights the significant reduction achieved in Spain over the last decade as regards fatalities in traffic accidents among drivers aged 16 to 29.

Spanish drivers between the ages of 16 and 29 account for the most significant reduction (75 percent) in the number of deaths caused by traffic accidents over the last 10 years. The figures, while still troubling, are clearly positive: six percent of young car drivers have been involved in an accident involving victims in the past three years. Road safety campaigns, lower mobility rates and greater awareness of the risks at the wheel are just some of the factors that have had a direct bearing on youngsters currently being safer drivers than those of exactly a decade ago.

This is reflected in the report Youngsters and Road Safety, which contains encouraging data such as the fact that seven of every ten young people feel they are “good drivers” and that most of them are aware that the most frequent risks of accidents include the consumption of alcohol (92 percent underscore it) and drugs (87 percent), as well as exceeding the speed limit (85 percent), driving when tired (74 percent), and using a cell phone (70 percent).

This study not only included young Spaniards, but also around 1,000 young people from Latin America (Argentina, Brazil, Chile, Colombia, Mexico and Peru), so that its results are equally useful in that region. In fact, the study was also presented in Colombia last October in front of the Colombian and Bogotá traffic and education authorities and, in November, in Buenos Aires before the National Road Safety Agency of Argentina. In Spain, presentations were held simultaneously in Madrid and Las Palmas de Gran Canaria.

Conducted with the aim of analyzing in a detailed, quantifiable manner the opinions and perceptions of 2,000 young people regarding the risks associated with driving, the study also shows that, in general, this population group drives smaller vehicles, which tend to be older and fitted with less safety equipment. It also highlights the fact that using the family’s second or third vehicle and frequently riding motorcycles (with less active and passive protection) makes them more vulnerable in the event of an accident. 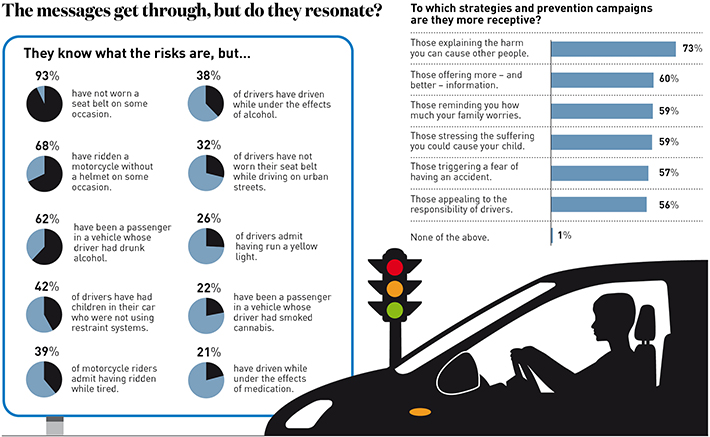 In this regard, the report underscores the fact that the greater their social activity, the more likely it is that youngsters will be exposed to alcohol and drug use, and, as a result, the greater their fatigue level behind the wheel. It warns about their lack of experience, which means that they have greater difficulty anticipating and reacting to hazards, and that, generally speaking, they have less expertise when it comes to driving safely when faced with certain weather conditions and situations on the road.

While 69 percent of residents in
Spain move around on foot on a daily basis, in Latin America this figure barely reaches 45 percent, perhaps justified by the fact that the majority, seven of every ten, feel that the roads are ‘not very’ or ‘not at all’ safe.

“These are relevant factors on which we must continue working,” says Jesús Monclús, Fundación MAPFRE’s Prevention and Road Safety manager, who believes that “much remains to be done to reduce to zero the deaths of young drivers and pedestrians. In Spain over 400 young people aged 15 to 29 die each year, which means that, on average, more than one youngster is killed on Spanish roads every day – truly intolerable.” This road safety expert also stressed the “need to continue promoting road safety training from the earliest stages of education, as they are key to avoiding frequent, dangerous habits, when they are passengers too.” In fact, on this very question, the report highlights the fact that nine of every ten young people have “at some time” ridden in a car without fastening the safety belt, that over half (62 percent) admit having been a passenger in a vehicle whose driver had drunk alcohol, and that two out of every ten have been a passenger in a car whose driver had smoked cannabis.

During the presentation of the study, Jesús Monclús defended the need for concrete measures such as promoting accompanied driving, strengthening the systems for progressive access to a full driving license, “for young people to gradually acquire greater experience in safer driving conditions; for example, they should particularly avoid driving at night and with other youngsters in the car”. The blood alcohol limits should also be lower for all drivers, but most especially for novices. “Young people are aware of the risks, but, even so, they believe they are inevitable. We must therefore convince them that they must say ‘no’ to danger.”

The most useful injuryprevention strategies, in the opinion of the youngsters, are: increase checkpoints on the public highways (speed and alcohol, among others); promote education in the classroom and stiffen the penalties for driving under the influence of alcohol, using a cell phone without hands-free equipment, not using a protective helmet and restraint systems such as seat belts or child safety seats, as well as exceeding speed limits. Young drivers are also in favor of taking advantage of the latest technologies to increase their safety and that of the other occupants. In this regard, more than nine of every ten vote in favor of the use of alcolock systems — devices that block the vehicle’s ignition if the driver is drunk, “black boxes” to identify the causes of accidents (88 percent), and speed limiters (81 percent). 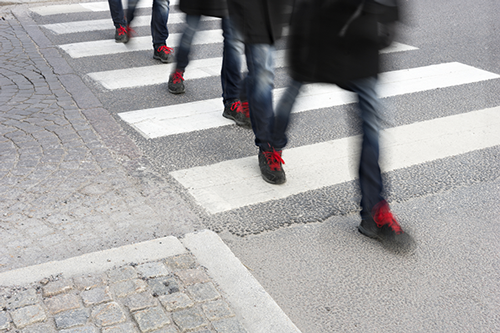 Your life can change in a second

Campaigns such as those launched recently by the DGT (Spanish traffic authority), in which people directly affected by an accident relate their experiences, are, in the opinion of the youngsters, those which impact the general public the most. 73 percent of young people indicate that the most effective road safety campaigns are those which explain the damage that can be done to other people, which stress the concern and suffering of the family (parents, partners, siblings) and friends when they lose a loved one, and which appeal to drivers’ sense of social responsibility.