If you know them, you’ll take care of them

“You cannot conserve what you don’t know.” This is the motto of the I Know My Fauna program run by the environmental organization AVAFES Canaries, with the support of Fundación MAPFRE Guanarteme. The aim is to teach schoolchildren and people with disabilities to discover the habits of the wild animals in their environment, as this is the only way they will feel inclined to love them and care for them.

“Hi. My name is Víctor. I’m going to tell you something very important about turtles. Turtles don’t eat seaweed, but rather jellyfish, as their digestive system is designed for this. But, if we throw plastic cups into the water, turtles may get confused, think they are jellyfish, and swallow them. And then they may die.” Víctor, who tells us this in a promotional video, is one of the 6,000-plus children in the Canaries who, over the last ten years, have become ‘green sentinels’ after attending the environmental education workshops organized regularly by the AVAFES Canaries association for schools and people with disabilities. What does it mean to be a green sentinel? Basically, to be a guardian of nature, caring for endangered animals, and explaining to others what should and should not be done to help conserve the natural environment.

In 2008 a group of veterinary students began wondering what could be done about the general public’s lack of knowledge regarding the situations encountered on a daily basis in a wildlife hospital: animals who are wounded or in a critical condition due to the accumulation of waste in the sea, the dispersal of toxic substances in the natural world, being run over, light pollution… But they realized that, in order for citizens to become aware of these issues, the first step should be creating a bond between them and the animals: see them up close, stroke them, feel them, even give them names. And that is how they started working, following a maxim: “You cannot conserve what you don’t know.”

Thus was I Know My Fauna born a decade ago. This is a program of courses offered in wildlife hospitals and natural spaces, so that children in the Canaries can learn about the habits of the different species of wild animals that live on the islands: what does a turtle eat; what do the blue chaffinch or the ‘guirre’ (Egyptian vulture) – both birds in danger of extinction – need to survive; what to do if you come across a wounded animal… Once they have assimilated all this through games and videos, those participating become green sentinels, which means they undertake to take care of – and get others to take care of – nature.

And they readily take this on as a truly important mission, for they have seen with their own eyes the fatal consequences simple negligence may bring about. But, little by little, after the experience of the first few years, the organizers of AVAFES noticed that something was lacking. “We realized that the workshops were sometimes attended by people with special needs (intellectual or physical disability, or mental illness) and yet our activities were not adequately adapted. We saw that they could benefit from these activities as much as – or more than – others, given that sensory contact with nature is highly beneficial in general, and so we set ourselves a new goal: organize specific courses for these groups,” explains the biologist Federico González Moreo, the project coordinator.

In 2013, with the assistance and financial support of Fundación MAPFRE Guanarteme, the first workshops for people with disabilities and at risk of social exclusion were run. Since then, dozens of users from local associations working with these groups have incorporated the philosophy of the green sentinels into their lives. Two of them, Wendy García and Juan Carlos Alamo, have even become protagonists of one of the videos that the monitors use as a teaching tool in the courses. Wendy is Violeta and Juan Carlos plays Leoncio: these two greens sentinels explain the special characteristics of the archipelago’s native species and the hazards humans pose to them.

The work of AVAFES and our Foundation with these groups is achieving results that go beyond environmental education. “Firstly, of course, those who participate in the workshops become aware of the need to take care of nature. But, in addition, for them this is also an integrating activity which brings great satisfaction on many fronts, as not only do we organize courses, but also excursions, beach clean-ups, etc. Some are even gaining work experience to become environmental monitor assistants. Apart from being a stepping-stone toward a job, this affords them greater visibility and normalizes their presence in schools,” González Moreo stresses.

“The sea is dirty and the fish are dying because people throw trash into the sea,” says a student in an AVAFES video. “And it’s the end for us too. Where are we going to swim?” another insists. Because they are already aware and know that what they have discovered and enjoy needs to be conserved.

One of the greatest enemies of nature – and, perhaps, one of the things a green sentinel most fears – is plastic. More than eight million tons of plastic reaches the oceans each year, which is equivalent to dumping a garbage truck of plastic every minute, according to a recent study published by the United Nations Environment Program (UNEP). It is estimated that, each year, plastic kills one million seabirds and more than 100,000 marine mammals and sea turtles. They die by swallowing it, or from intoxication, suffocation or entrapment.

The worst thing is that a plastic bottle, for example, can have a lifespan of 450 years and, during that period, can kill different animals over and over again. All species of sea turtles, for example, eat plastic fragments. They also swallow bags, which they mistake for jellyfish, a typical prey for them. This often leads them to an agonizing death. The same is true for filter feeders such as mussels. Even microscopic beings that form marine plankton eat microplastics. Plastics in the sea, in addition to their own toxicity, attract and accumulate the toxins present in seawater. 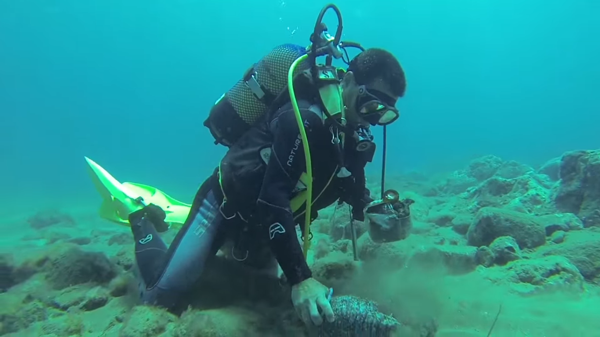 The beaches, cleaned up

I Know My Fauna program is not limited to organizing environmental education courses for children and people with disabilities. From the outset, the workshops have been complemented by periodical activities such as excursions to observe the wildlife or release fauna back into the wild, and clean-up operations on beaches in the Canaries.

In 2013, Cristian, José and Israel, three youngsters from Actrade (Canaries Association of People with Pervasive Development Disorders) were tasked with releasing three loggerhead turtles which had spent several months in rehabilitation at the Wildlife Recovery Center of Tafira. These turtles had become entangled in nets and garbage which had damaged their flippers. The vets had therefore decided to remove them for a while from their natural surroundings in order to heal them.

Once rehabilitated, AVAFES was entrusted with returning the turtles to their natural habitat. They took advantage of World Autism Awareness Day to organize this release back into the wild together with several autism associations, with the twofold objective of this fun activity fostering environmental awareness, as well as greater visibility and integration for those with this disorder.

Another activity organized within the I Know My Fauna program is the clean-up of beaches. AVAFES volunteers periodically arrange cleanup operations which not only serve to collect garbage, but also to motivate society and make the public aware of the need to look after the natural surroundings. Plastic bags, hooks and pieces of raffia are especially dangerous for wild species that live in the waters of the Canary Islands.

30 people participated in the latest operation, organized at the El Cabrón beach in October last year. They were from ADEPSI and APADI, two associations working for the social and labor inclusion of people with different disabilities. The activity began with an awareness talk and ended with the distribution of ashtrays among the people who were on the beach, and the release of shearwater chicks rehabilitated at the Recovery Center of Tafira. Sometimes, the plastic elements collected in these beach clean-up operations have subsequently been used as materials for artistic and recycling workshops.