Drownings can be avoided

Drowning is one of the leading causes of injury-related death in the world, although neither governments nor citizens seem to be aware of this fact. Rescue and first aid are much needed measures, but prevention stands as the main tool for reducing the number of accidents.

The figures facilitated by the World Health Organization are chilling. In the year 2015, some 360,000 people died from drowning around the world. In fact, it is the third leading cause of death from unintentional injury, accounting for seven percent of all injury-related deaths. However, in addition, the fact is that these data may be far removed from reality, because “the official data categorization methods for drowning exclude intentional drowning deaths (suicide or homicide), as well as drownings resulting from flood disasters and water transport incidents,” states the WHO Drowning document.

The reality is that, if these cases were counted, the figure would increase considerably: by up to 50 percent in high-income countries. These are not the only shocking data. There is also the fact that this particularly affects children and adolescents: drowning is the leading cause of death among children aged 5-14 (in Spain, the highest rate of deaths from this cause is in the 70-79 age group). According to the Panorama study on child road safety in Spain, there have been years in the past decade in which drownings have claimed more lives of children under the age of 15 than traffic accidents. In the United States, it is the second leading cause of injuryrelated death in children aged 1-14. These situations pose a real drama for families. According to David Szpilman, medical director of SOBRASA — Brazilian Lifesaving Society — and a world reference in this field: “In contrast to other causes of death, drowning occurs unexpectedly in the vast majority of occasions, especially with children, which generates a chaotic situation within the family. Among all the possibilities of injury, drowning is undoubtedly the one with the greatest family, social and economic impact.” 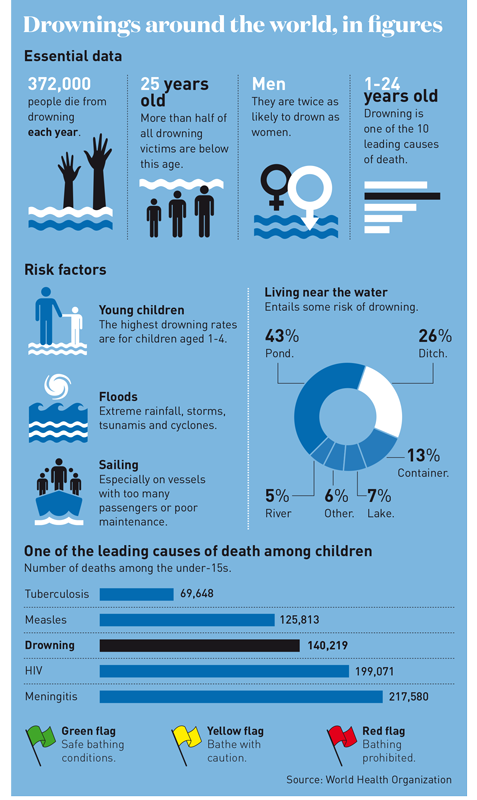 Indeed, it is an extremely dramatic situation. But, in addition, it has important economic consequences that should not be underestimated. “Although data are scarce, several studies reveal information on the economic consequences of drowning. In the United States, 45 percent of people killed by drowning form part of the most economically active segment of the population. In that country alone, drownings in coastal waters entail direct and indirect costs to the tune of 273 million dollars each year. In Australia and Canada, the total cost is, respectively, 85.5 and 173 million dollars a year,” states the WHO. This data refers to coastal waters but, curiously, fresh waters are much more deadly, accounting for 75 percent of all deaths. In particular, in some countries it is in the rivers that these tragedies occur more often, according to reports drafted by SOBRASA.

Given all this, it is clear that there is a need to act. “The word drowning brings to mind rescue and first aid as the mostimportant measures; however, the most effective tool in the fight against drowning is prevention.” This statement by Szpilman clearly highlights what we must focus on when taking action to reduce the number of deaths. So much so that, according to SOBRASA’s Aquatic Emergencies Manual, prevention measures can actually avoid 85 percent of fatal drowning incidents. And they not only act on reducing mortality rates, but also morbidity (injuries resulting from near-drowning incidents).

The WHO’s 2017 Drowning Prevention Guide provides a list of six basic prevention measures: provide safe spaces away from the water for preschool children; install barriers controlling access to water; teach school-age children (aged over 6) swimming and water safety skills; build resilience and manage flood risks and other hazards; train bystanders in safe rescue and resuscitation; and set and enforce boating, shipping and ferry regulations. Only in this way does it seem possible to reduce the figures with which we started this article.

The most effective tool in the fight against drowning is prevention

This Brazilian and his three brothers were raised on Copacabana Beach and, from a young age, he was in contact with the hazards of the sea and water sports, which he practiced since he was a kid. His experiences as a lover of the sea and as a physician made him acutely aware of the dangers of drowning. Today he is one of the leading experts in maritime rescue, one of the founders of SOBRASA (Brazilian Lifesaving Society) and its medical director.

Do you believe the authorities have a true notion of the problem?

No, the actual number of drowning deaths is over one million a year throughout the world. It is one of the leading causes of death among children and young people around the world, although only part of the problem is quantified. This occurs because of the way data in this area are collected and classified, in addition to the difficulty in interpreting them and adjusting them to our reality. [Szpilman is referring to the fact that homicides, suicides and flood deaths are not counted as drowning deaths].

What is the chief cause of drowning?

The main cause of drowning is that people don’t believe it can happen to absolutely anyone, no matter of what age, sex or social status they may be.

According to the WHO, 90 percent of all deaths are concentrated in low- and middle-income countries. Does this mean that, with resources, deaths could be avoided?

Yes, indeed, with major effective prevention campaigns a lot could be done and good results achieved as regards cutting drowning figures. This should be a job for society as a whole, governments and private initiative, working as a team. Together we can do so much more.

Can the deaths averted by the existence of SOBRASA be quantified?

In 20 years we have been a 37 percent reduction in drowning deaths.

Each year Fundación MAPFRE launches a Drowning Prevention program thanks to which they are present at more than 62 beaches in 40 municipalities right round the Spanish coastline, as well as at inland natural spaces such as the Costa Dulce de Orellana (Badajoz) and San Juan (San Martín de Valdeiglesias, Madrid) reservoirs. The goal is to reduce the 2017 figure for drownings in Spain which, according to provisional data from AETSAS (Spanish Association of Water Rescue and Lifesaving Specialists), came to 542 deaths, 23 percent more than in the previous year. In 2018, over 50,000 people are to participate in this prevention campaign, which is run in collaboration with Blue Flag-ADEAC (Environmental and Consumer Education Association).