The leader we all have inside

Who still thinks that an underprivileged child cannot go on to become a leader capable of changing the world? Each year disadvantaged students from Latin America and the Caribbean have the chance to improve their English and develop their leadership skills.

Fundación MAPFRE supports a number of programs in the United States which show that education is key to reversing the effects of poverty. Over a ten-month period these youngsters study English in Seattle, living with host families to ensure a full cultural immersion experience. But, in addition, they attend leadership seminars, meet mentors, visit firms and perform community work so that, once they are back in their own countries, they can be better prepared and offer this talent to their community.

“This program is an nvitation to grow personally and professionally. Our students spend a lot of time pondering the challenges we set them, but also celebrating their successes. We work on self-awareness, communication, social skills and leadership. I admire the courage and audacity of the students on examining their past, discussing their present and imagining what they might be capable of doing in the future as leaders,” the program director, Jacqueline Shrader, explains in her blog. “It must be said that, all too often, leadership is associated with prestige and authority. That is not how we understand it; on the contrary, we view leadership as providing a service. For us, a leader is a flexible, responsible, compassionate person, capable of promoting changes that help improve life within their communities,” explains the director. 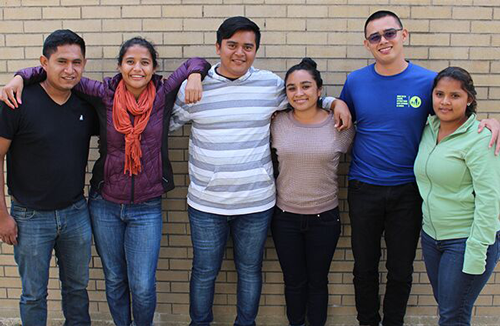 The graduation ceremony for the six youngsters who benefited from the program this past year was held at the end of June. Their final speeches at this event demonstrated the tremendous impact their stay in Seattle had had on their lives. “I’ve come a long way to reach this place, somewhere I couldn’t even have imagined being prior to this program and where I’ve learned that I can become the best version of myself. I can proudly say that I’m now able to identify who I am, as a human being and as a leader. I can now be sure that I’m on the right path to becoming the man I’ve always dreamed of,” declared an emotional Samuel, from Haiti, during his intervention.

Saravia, from Honduras, spoke of leadership, justice and freedom: “For me leadership means something more than heading a group or having control. I firmly believe that a good leader is someone who is able to put themselves in other people’s shoes. Someone who strives to reap benefit for the whole group, not just for themselves. That is the kind of leader I want to be. My time in Seattle has also taught me how to fight for equality, social justice and freedom of expression.” And David, from Guatemala, spoke of his plans for the future: “I’m looking forward to returning home and continuing my studies at university. I’m studying Psychology and one day maybe I’ll open my own clinic to help people with problems. It’s most important never to lose sight of this philosophy – to be a productive member of society.”.

“I can proudly say that I’m now able to identify who I am, as a human being and as a leader. I can now be sure that I’m on the right path to becoming the man I’ve always dreamed of”

The NPH Leadership Institute program has been run since 2011 by the Nuestros Pequeños Hermanos organization, an international nonprofit organization that provides housing, education, health care and a family for vulnerable children in Latin America and the Caribbean. It was founded in 1954 by an American, Father William Wasson, following an episode which was to mark his life and, in the future, that of thousands of disadvantaged children. It occurred in Cuernavaca (Mexico), where he was the parish priest in a rather poor neighborhood. One day, the police arrested a minor for stealing from the church’s poor box, but Father Wasson refused to file charges against the boy; on the contrary, he asked for custody of the boy and the judge agreed to this. A week later, the same judge sent him a further eight homeless children to take care of. By the end of the year, 32 children were already living with him.

Thus NPH (Our Little Brothers and Sisters) was born. Since then, close to 20,000 children have been raised with the help of this organization, which now runs shelters for vulnerable kids in nine countries: Mexico, Honduras, Haiti, Nicaragua, Guatemala, El Salvador, Dominican Republic, Peru and Bolivia. Around 1970 Father Wasson launched a program so that the most promising youngsters who had grown up under his protection could learn English and have the chance to study and become role models for the other children who were growing up with them. The participants on the leadership program in Seattle are now chosen on this basis. 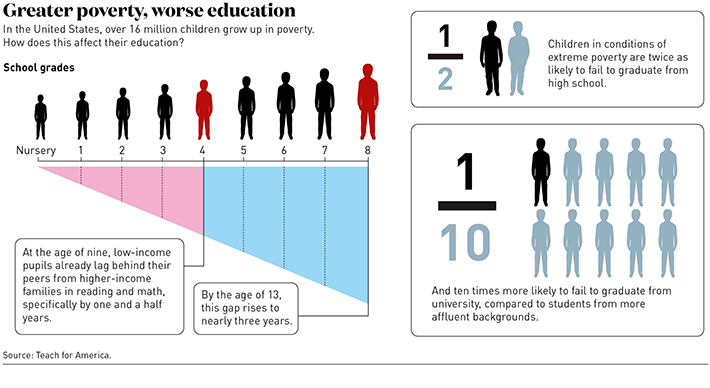 This is not the only leadership development program that is supported with funds provided by Fundación MAPFRE in the United States. It recently signed another agreement with the Teach for America organization to finance the training of 10 new teachers for 625 children from low income communities in the city of Boston (Massachusetts). This means that these new teachers must be prepared not only to convey academic knowledge to their students, but also to help them improve their living conditions through education. And, of course, to open up to them the chance to access higher education.

This project is having a huge impact on society, as it enables disadvantaged children to benefit from top-quality education. Since its creation in 1990, Teach for America has been convincing graduates and outstanding professionals to commit themselves for an initial period of two years to teach in schools in low-income neighborhoods in order to combat educational inequality in the United States. To do so, the future teachers complete a specific training course, designed especially for schools in disadvantaged areas and governed above all else by a key precept: education can change lives.

In the Massachusetts area there is another organization that also receives funding from Fundación MAPFRE. It is called the United Way of Webster and Dudley and is a kind of support network that underpins 17 local health and humanitarian organizations working directly with more than 7,000 people at risk of social exclusion in the localities of Webster and Dudley. 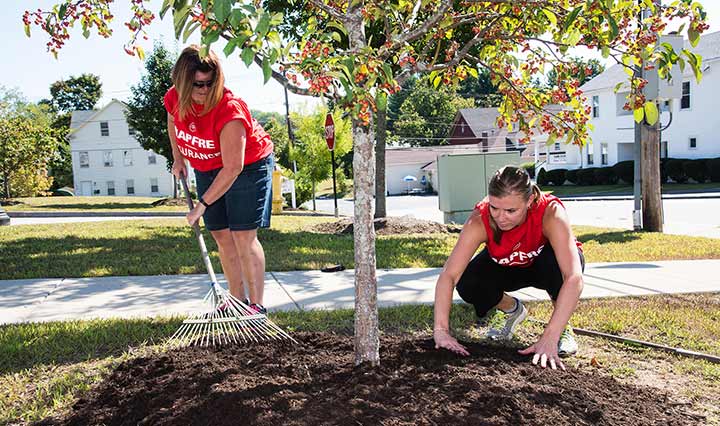 Elisa Villanueva Beard became a Teach For America teacher in Phoenix in 1998. Two years later she met her future husband, Jeremy Beard, who also taught at a high school associated with the organization. Almost two decades later, she has become CEO of the organization and both are still fighting for what brought them together – to build a better world for their children. “When we work for educational equality, we are working to change reality. We are fighting against segregation, racism, xenophobia and inequality. So this is much more than just an educational program. It’s a program to change the world,” said Ms. Villanueva Beard in her welcome address to the new teachers last year.

“Eighteen years ago, when I started at Teach for America, the people were still arguing about whether or not it was possible for children growing up in lowincome communities to reach the same level as their better-off peers. There were still people wondering whether it was possible, whether colored students could really be as good as the white students in the school. Nowadays, that is no longer a legitimate question. We know they can. Of course they can. We can point to hundreds of schools in urban and rural areas of the United States proving it every day,” her speech continued. “Today, we reject the world as it is and we commit ourselves to making it as it should be,” the organization’s CEO concluded in emotional fashion.