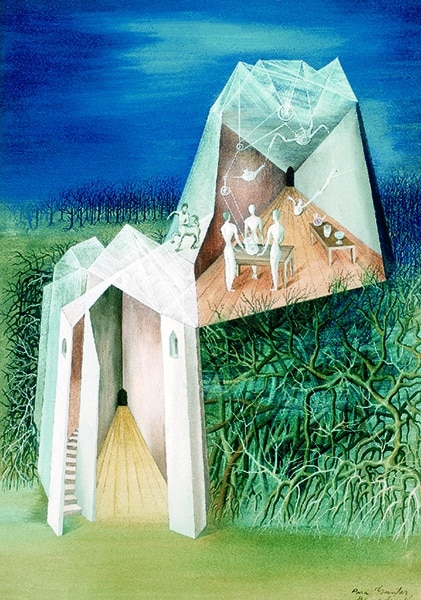 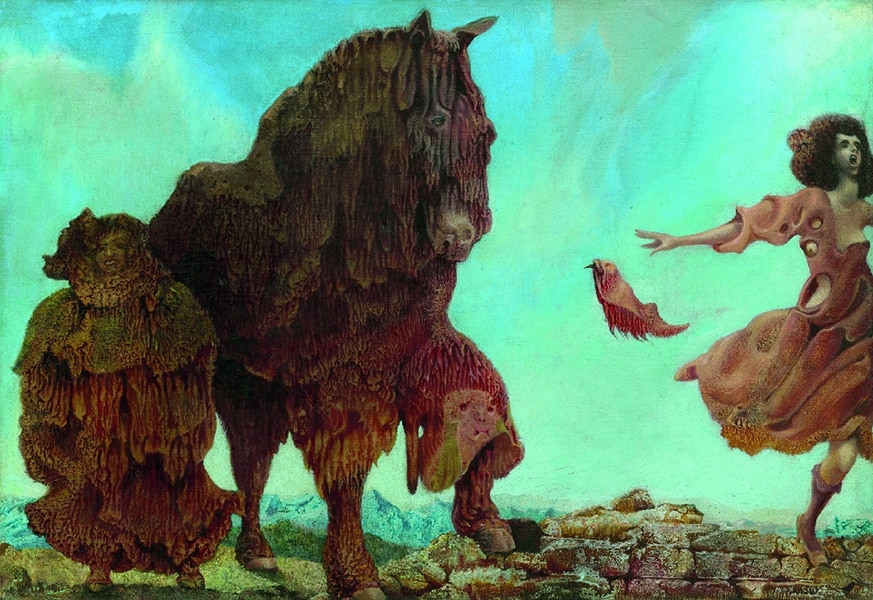 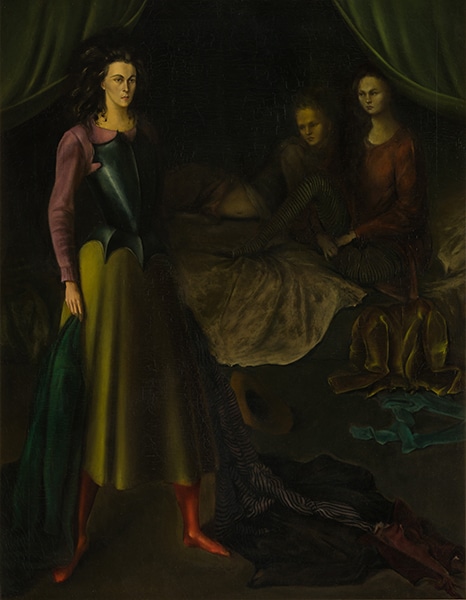 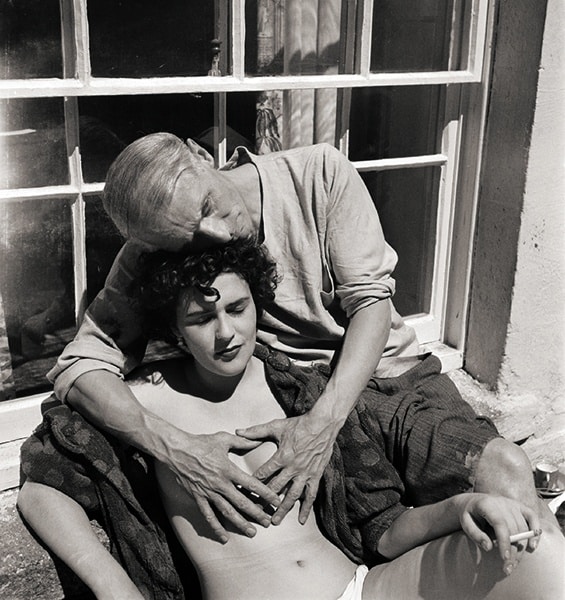 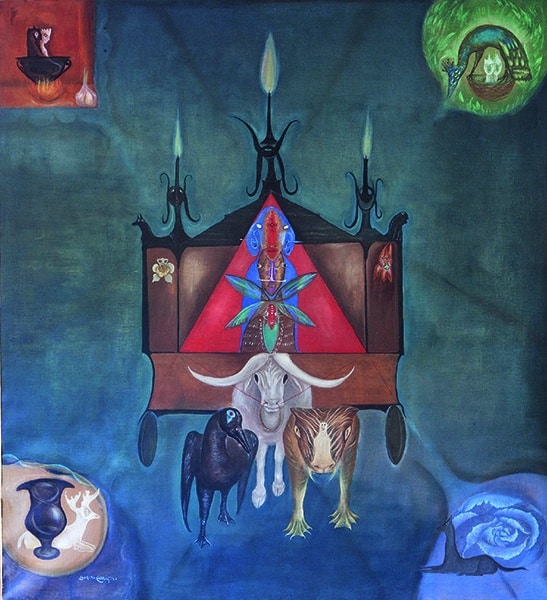 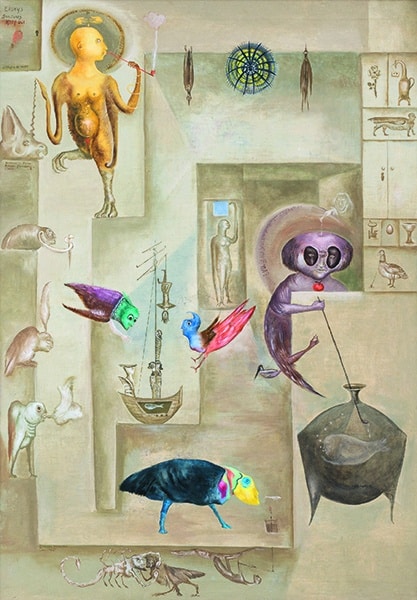 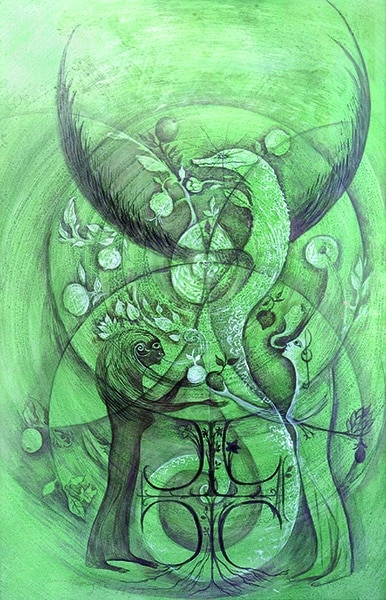 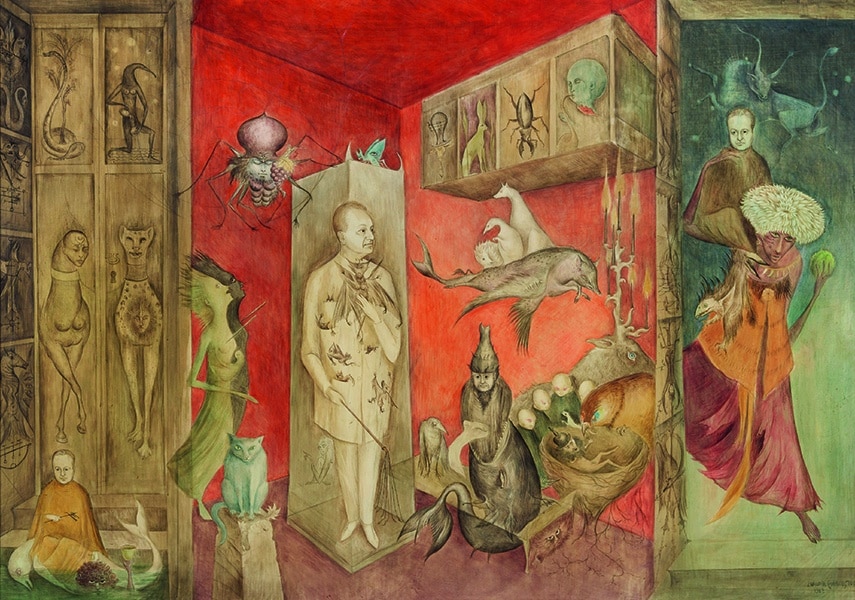 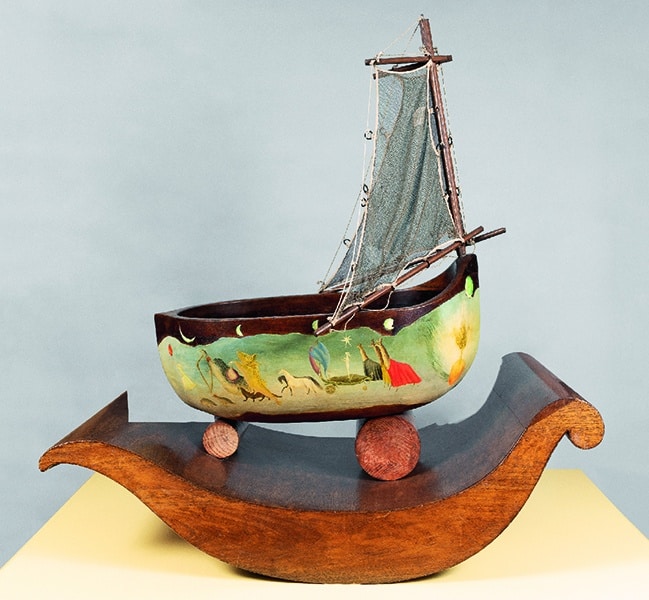 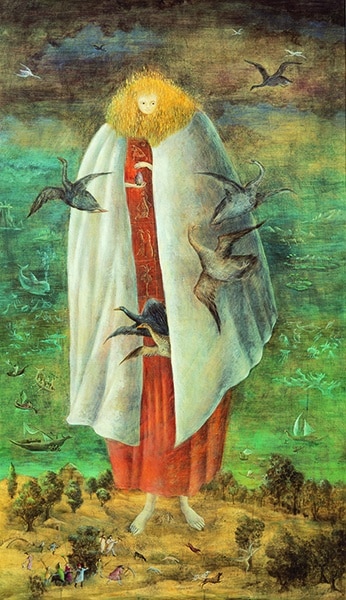 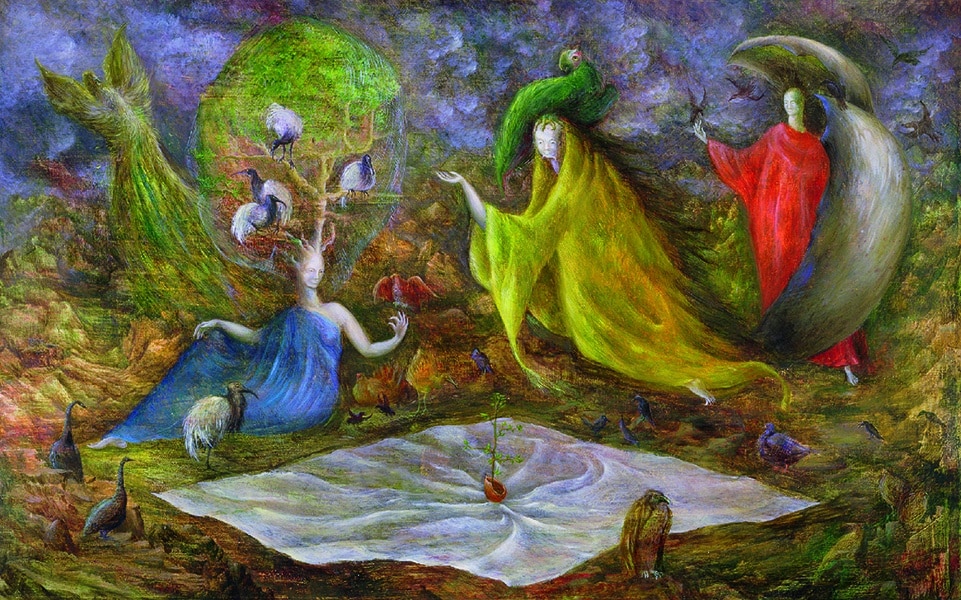 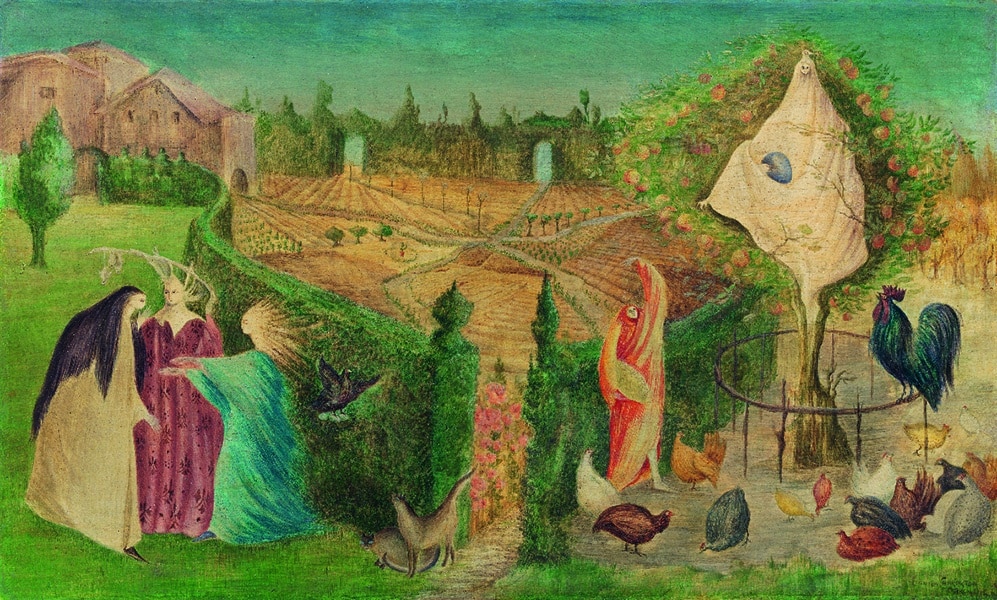 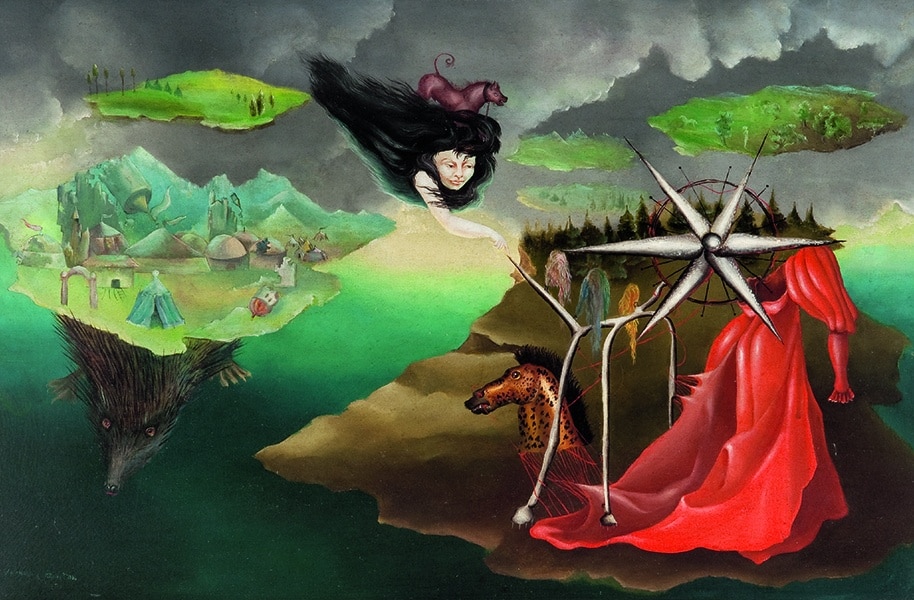 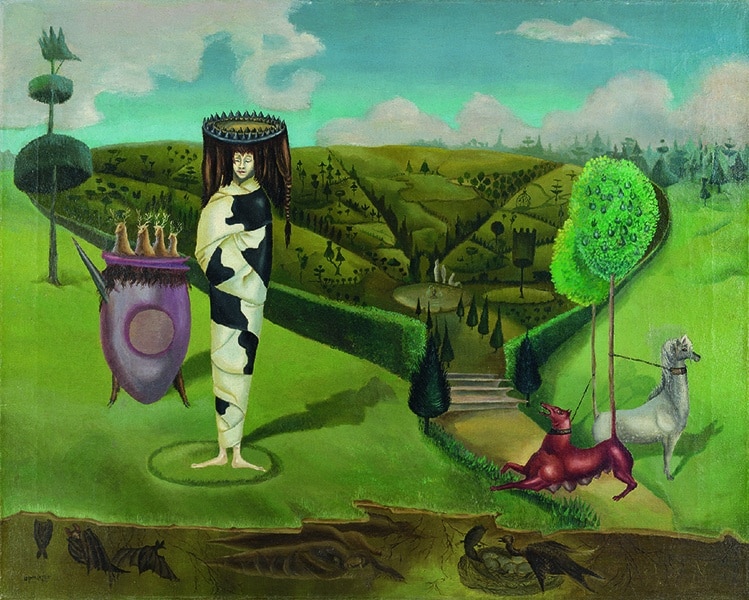 The first anthological exhibition dedicated to the artist Leonora Carrington to be held in Spain has landed in Madrid, at Fundación MAPFRE’s Sala Recoletos. A versatile and eclectic author, continually searching for new forms of expression, Carrington is a key figure when it comes to forming a more complete image of 20th century art. The exhibition, organized by Fundación MAPFRE in collaboration with the ARKEN Museum for Modern Art in Denmark, can be visited from February 11 to May 7, 2023.

The exhibition is divided into 10 sections that combine a chronological narrative with a study of the most prominent themes in Leonora Carrington’s work. From her training and early influences in England and Florence to her contact with the surrealists in Paris, through her time in Saint-Martind’Ardèche, her traumatic experience in Spain, her emigration to New York, and her new homeland in Mexico.

In 1932, a young Leonora was impressed by the Italian painting she witnessed during her stay at a boarding school in Florence, among them artists Paolo Uccello and Antonio Pisanello. An influence that would not be felt in her early works, but rather later ones. Her most outstanding production from that period is a set of watercolors grouped under the generic title Sisters of the Moon (1932-1933), which reflect the artist’s concern for women’s place in the world. Each of them depicts a female character and some of them directly reference deities such as Iris, Fortuna and Diana.

From a very early stage, her pictorial production ran parallel to her written work, to the point that it is difficult to discern which came first, the text or the work, as in Hyena in Hyde Park (1935), one of her earliest canvases and which correlates with a short story she wrote in the same year under the title “The Debutante”, in which she satirizes her own introduction to society before the court of King George V.

In 1936, Leonora moved to London and attended classes at the art academy of the cubist painter Amédée Ozenfant. In the summer she visited the The International Surrealist Exhibition and also fell in love with a work by Max Ernst reproduced in the book Surrealism. As if it were a premonition, she met the artist the following year at a dinner party and together they escaped first to Cornwall and later to Paris, finally settling in the town of Saint-Martin-d’Ardèche, in the south of France. Thanks to her mother’s financial support, Leonora bought an old house where the couple embarked on their own full-scale work of art, both inside and outside. They painted doors, windows and walls with hybrid figures and protective creatures —like the chimera that originally decorated the access door to the old kitchen, but also the photographs taken by Lee Miller during one of his visits around that time.

Memories from below: Santander

World War II cut short Max Ernst and Carrington’s life in Saint-Martin-d’Ardèche. After Ernst was arrested for the second time, Carrington fled to Spain with the intention of crossing to the other side of the Atlantic from Lisbon. Upon her arrival in Madrid in 1940, she was raped by a group of soldiers affiliated with the nationalists. This fact, which she told no-one at the time, and the dramatic events she had suffered since the beginning of the war precipitated a psychotic episode in the artist, leading to her being admitted to a psychiatric sanatorium in Santander. Treated with a powerful drug that could generate epileptic seizures and take away the patient’s will, the experience of this hospitalization was a turning point both in her life and her work. The account of her stay in the sanatorium was published for the first time in 1944, in a magazine under the title “Down Below”, after having been dictated in French the previous year by Leonora to Jeanne Mégnen, to free herself from the anguish caused by the memory. During her internment she also made numerous drawings and produced the painting Down Below (1940), a reflection on her illness.

Towards the unknown: New York

In July 1941, a twenty-four year old Leonora Carrington disembarked in New York —after a quick wedding so that she could leave Lisbon— accompanied by her new husband, the Mexican writer, poet and diplomat Renato Leduc. There they met the community of surrealist artists who, like them, had fled a Europe and Spain at war. During this period, before settling in Mexico, Carrington’s work, with increasingly complex iconography, focused on her mourning of her experience of war, mental illness and confinement, to which was now added that of exile. In the drawing Brothers and Sisters Have I None (1942) we can understand that the condition of exile is twofold: with respect to a destroyed Europe and to a family that she disowns. Green Tea (1942) summarizes these experiences. Undoubtedly, the figure sheathed in a horse skin as if it were a chrysalis is Leonora herself, with a background that refers to the English landscape, Tuscan Italian painting, and the park of the Santander sanatorium. The immobility of the protagonist contrasts with the movement of the two mare-dogs tied together by the trees that serve as their tails.

In 1943, Leonora moved to Mexico City, where she surrounded herself with a circle of exiles who, like her, had their roots in Europe: Kati and José Horna, Remedios Varo and Benjamin Péret. At their home she met her future husband, photographer Emerico (Imre) Weisz, “Chiki”, and father of her two sons, Gabriel and Pablo. The experience of motherhood began a period of regression in Carrington’s work. She represented her childhood home, the neo-Gothic mansion of Crookhey Hall, as well as family and childhood visions full of melancholy, although calmer than those she created in New York. This is the case of the cradle she made together with Andalusian sculptor and cabinetmaker José Horna for his daughter Norah, decorated with animals that were to accompany the little girl from her first moments: a giant tortoise, a goat, jaguars, llamas, horses and other composite creatures that seem to be taken from the works of Lewis Carroll and Italian Renaissance painting.

Along with animals, ecology and women, the divinatory arts and esoteric currents interested Carrington, as she considered them an alternative route for accessing the unconscious and the enigmas of human beings and nature. With the painter Remedios Varo and the Hungarian photographer Kati Horna, she delved into the world of magic, as all three understood this as a tool for reclaiming “forbidden” feminine powers. Books on magic, alchemy, astrology and tarot held a privileged place in her library, as well as providing her with iconography that she used again and again in her work, like in the canvas Molly Malone’s Chariot (1975), where the arcana The Chariot and The World recreate the legend of young Molly, protagonist of the popular Irish song “Cockles and Mussels”, in a painting presented to the public for the first time today.

In 1948, Carrington painted Le Bon Roi Dagobert (Elk Horn) [Good King Dagobert], the first painting in which she represents herself as the White Goddess, doubtlessly referring to the essay of the same name by Robert Graves. Published in exactly the same year as the artist’s canvas, this essay is, according to the artist herself, one of the most important revelations of her life. In the story, Graves focuses on the revival of different cults around female deities that have disappeared throughout history, but which have survived in fables and poems in oral form. This White Goddess, whose cult was destroyed by patriarchy and is recovered by Graves, is a symbol of feminine strength and power. Graves’ dissertation is based on the discovery that this same female deity was worshipped in various places around the Mediterranean, which in turn corresponded to the cults of the Celtic gods. In all of them the Triple Goddess is venerated, also known as “White Goddess” and referred to in each place in a different way. Artemis or Athena in Greece, Ishtar in Babylon, Isis for the Egyptians and Astarte for the Semites: she is always the same goddess and symbolizes the struggle between patriarchy and matriarchy as well as light and shadow, namely the dichotomy

From the 1960s on, Leonora Carrington became increasingly interested in feminist movements. Despite never having been a militant, her house in Mexico became a meeting place for a small circle of women concerned about their situation of inequality and lack of rights. The painting Mujeres conciencia [Women’s Awareness] (1972) is used in the print of the poster of the same name, as a sign of “indignation and anger about the situation of women”, as the author herself stated in an interview. In this gouache Carrington subverts the myth of Adam and Eve and gives the latter the character of a goddess. The artist’s desire to transmit to women the message of taking back their powers is a constant theme throughout her literary and artistic production.

There are other worlds: México

Upon her arrival in Mexico, Carrington’s interest in magic was renewed by a people for whom the practices and rituals of sorcery were part of everyday life. At only twenty-five, it seemed to her a place where everything was new; the rituals surrounding death, as well as the beliefs in guardian animals and protective entities resonated with the Celtic myths and traditions she had absorbed in her childhood.

Many of her friends, exiles like herself, shared a fascination for Mexican archaeology and ethnography: Austrian painter Wolfgang Paalen, collected pre- Columbian objects; Alice Rahon, captured the landscape and popular traditions in her poems and paintings; and Benjamin Péret, translated into French the Mayan codices of the Chilám Balám (de Chumayel) and compiled his Anthologie des mythes, légendes et contes populaires d’Amérique.

To be human, to be animal

Real and mythological animals are among the most recurrent motifs in Carrington’s work. Mythological, hybrid and fantastic creatures into which the artist herself transforms and under which she depicts herself, to the point of having selfdefined herself as a “female human animal”. Later on she emphasizes: “There are some faculties that we have not accepted or recognized because we are afraid that someone will think that we are also animals, which in fact we are.” This love for animals, which began in childhood, transformed over time into a very forward-thinking ecological vision for the time, as the author often expressed her indignation at the predatory attitude of the human species and its mistreatment of the ecosystem. Her ecological conscience is, in turn, closely linked to her feminist beliefs, since for Carrington it is only through the matriarchy’s recovery of power that the planet can be saved from the destruction to which it is being subjected. This sentiment also attracted her to other religions and cultures, such as Buddhism, a philosophy that promotes empathy and compassion for all forms of life.