The roots of El Segador

“A scream from the wall.” This was how Josep Renau defined the poster, coining what was probably one of the most pertinent definitions of this means of communication, which has served commercial, educational and propaganda ends since the 18th century. The golden age of the poster in European and American cities spanned from the second half of the 19th century up to the 1960s. And Spain was no exception, given the memorable artists in the country who left us some remarkable examples of their work. Some of them have gone on to become true works of art, or also, as in the present case, a testimony of an era.

MAPFRE was born in 1933 as a benefit society (Mutualidad) founded by the Agrupación de Propietarios de Fincas Rústicas Españolas (grouping of Spanish agricultural property owners) in response to the legislative changes introduced during the Second Republic, specifically the expansion of occupational accident insurance in the agricultural sector. The initial headquarters were in Calle Santa Catalina in Madrid. As stated in its first annual report in 1934, just one year after its creation, the insurer had to relocate its headquarters to a larger space, specifically to Paseo de Recoletos 25 (current head offices of MAPFRE RE), given that, due to the huge growth experienced in its first year of operation, it saw the need to hire more employees and expand its office space. For this reason, there are versions of the plaque with different addresses: Santa Catalina 7; Paseo de Recoletos 25; and Avenida Calvo Sotelo 25 (previous name of Paseo de Recoletos).

The illustrator and painter Rafael de Penagos (Madrid, 1889-1954) was commissioned to produce the company’s first brand image. In his book Así se hizo MAPFRE [How MAPFRE Was Born], Ignacio Hernando de Larramendi comments: “It seems incomprehensible that (Penagos) would have accepted that assignment from MAPFRE…” This comment is due to the fact that the Madrid artist was considered the most representative commercial artist of his time, as well as an extraordinary poster artist, and enjoyed tremendous professional recognition. A regular contributor to the leading publications at that time — La Esfera, Nuevo Mundo, Blanco y Negro — Penagos contributed to the imagery of the period with illustrations depicting a modern, cosmopolitan society. In addition, he won numerous poster competitions organized by industrialists and commercial companies, and this afforded him great prestige. 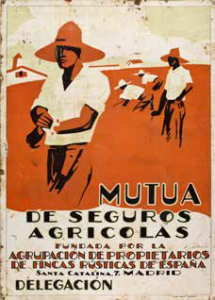 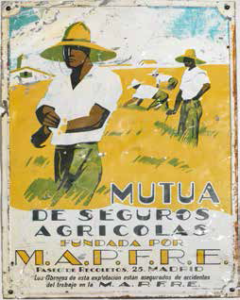 Most noteworthy, from an artistic viewpoint, is the simplicity of the composition, achieved using plain colors and simplified forms

In this first MAPFRE poster, Penagos depicts the figure of a harvester with a bandaged hand covered in blood, who is turning around toward the viewer, while his colleagues keep working. The four individuals are portrayed with the same clothing and their faces barely reveal any personalized physical traits. The artist was probably trying to create a prototype day laborer with an anonymous aspect, so that other workers could see themselves reflected in a dramatic, unexpected event and understand the need for protection, given how an accident at work could pose a serious setback for them. Most noteworthy, from an artistic viewpoint, is the simplicity of the composition, achieved using plain colors and simplified forms. 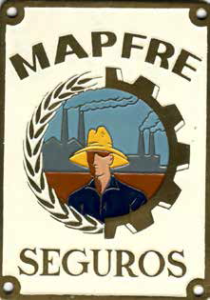 The image of the harvester became an icon for MAPFRE and the figure was transferred onto metal plaques which were handed out to its members to be displayed at their insured places of work. In the policies at that time, the payment of the plaque, as well as that of the premium, was recorded. Moreover, MAPFRE’s first Annual Report, in 1934, detailed the expenditure of 10,790.50 pesetas for the production of plaques for their policyholders. The image of the harvester was printed on a range of media and gave rise to numerous versions with diverse texts, colors and sizes.

The plaques were engraved at the Societé Generale des Cirages Français. Of French origin, this Société was set up in Santander in 1877. As well as operating as a lithographic printing press, it manufactured tin cans, lithographed brass items and advertising plaques.

The harvester remained a strong sign of identity until the 1950s. In this decade the company was transformed and wished to convey a different vision that reflected its diversification into other lines of insurance. To achieve this, the traditional image was adapted, managing to combine the agricultural and industrial sectors. The end result was the use of the bust of the harvester’s figure, but with a very different landscape from that of the original poster: the farmhouses were replaced by factory structures, with the smoke from the chimneys sweeping across a large part of the sky. All encompassed within a circular space, half of which was framed by an ear of wheat, and the other by a toothed wheel.

While the figure of the harvester has been consigned to oblivion by other more up-to-date logos and images, in keeping with the world of corporate strategy and communication, it is interesting to recall how the company’s first image came about and, above all, the importance of calling on the most famous illustrator of the time, Rafael de Penagos. The immense legacy left by the Madrid artist, faithful witness of a hectic, difficult time, is reflected in the numerous excellent drawings that form part of the artistic collections of Fundación MAPFRE, as well as in the historical plaques depicting the harvester which can be seen at the Insurance Museum.