Linked to serious illnesses ranging from diabetes to some cancers, overweight and obesity are already one of the leading causes of death around the world. A true pandemic which has increased threefold worldwide over the last 40 years. The WHO and other national and international institutions are striving to raise public awareness of the gravity of this problem.

Around the world 2.8 million people die each year as a result of being obese or overweight. These are figures from the World Health Organization, which defines overweight and obesity as “abnormal or excessive fat accumulation that may impair health.” While it might seem of little importance, this simple phrase nails this problem on the head. Being overweight or obese is not an aesthetic question, but rather a health issue. And no fewer than 1.9 billion adults over the age of 18 are affected, 650 million of them obese. Given these alarming figures, it is no wonder that overweight is currently referred to as a global epidemic that must be combated with “a population-based, multisectoral, multidisciplinary and culturally relevant strategy,” in the words of the WHO.

Indeed, action needs to be taken quickly. Even though, at this stage, few doubt the relationship between a high body mass index and certain health problems, some studies have broadened the scope of the bleak outlook for the human body due to overweight and obesity.

Decades ago the clear impact of obesity on heart disease, hypertension, strokes or respiratory problems was verified. This is confirmed by Dr. Francisco Tinahones, president of the SEEDO (Spanish Society for the Study of Obesity): “A huge list of illnesses are linked to obesity: type 2 diabetes – and, with it, 25 percent of kidney failures – would be dramatically reduced if we could achieve a normal weight in the general population; many types of cancers are associated with obesity, for example of the digestive tract, uterus, pancreas, ovary, etc.; joint problems; respiratory diseases; hypertension; lipid alterations; and even a significant decline in fertility.”

Those who live in the most densely populated cities and, at the same time, enjoy a higher socioeconomic status reveal a lower prevalence of overweight and obesity

In fact, some studies (one of the most recent was published in The New England Journal of Medicine) establish a clear relationship between excess kilos and some cancers: “We have identified 11 types of cancer in which there is a direct relationship with obesity, among them breast, endometrial and liver cancer. Although the exact mechanism remains unknown, the direct correlation has been identified.

“In Spain one in four of the population is obese,” Tinahones remarks. And he goes on: “We are undoubtedly facing the great pandemic of the 21st century. The incidence of obesity is on the rise around the world, with obesity and overweight now affecting over half the population in the vast majority of the developed or developing countries.” Likewise, in Spain, a report published in the Revista Española de Cardiología last September indicated that 39.3 percent of the Spanish population aged 25-64 are overweight, and 21.6 percent are obese. 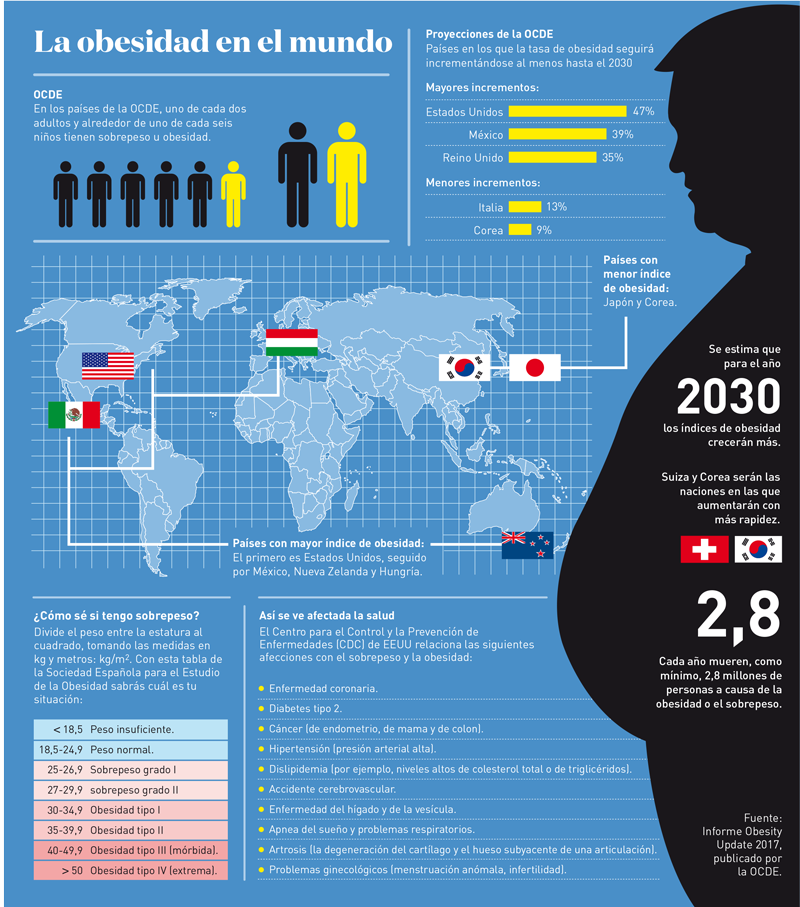 In addition, this research reveals that “those people who live in the most densely populated cities and, at the same time, enjoy a higher socioeconomic status reveal a lower prevalence of overweight and obesity.” This is the conclusion of Dr. Gregorio Varela-Moreiras, director of the CEUNUT (Nutrition and Food Sciences Research Group), Professor of Nutrition and Bromatology at the CEU San Pablo University in Madrid, president of the FEN, and coordinator of this scientific work. On the occasion of the presentation of a study on childhood obesity in 2009, Varela also stated that “obesity is already a problem in the rural and semi-urban areas. In smaller towns and villages, there is now greater inactivity than in the urban areas, where there is a greater awareness of the need for physical exercise. In a very short time we have seen a really rapid change; previously, it was just the opposite. The increased quality of life has reached the rural environment much later and the obesity and overweight figures have not yet peaked.”

How can we prevent it?

The key to controlling this pandemic is prevention, as the World Health Organization (WHO) stated in its 2016 report on childhood obesity. Varela confirms this: “It’s essential, given that, at present, there is no medicine capable of curing obesity. Until very recently, more importance was afforded to our diet, but we now know that a lack of exercise is just as important.” But prevention must start right from childhood: “An obese child is highly likely to grow up to be an obese adult and develop type 2 diabetes. We are already even seeing such cases of diabetes in adolescents. We can categorically state that an obese child will become a less healthy adult than a normal weight child,” the president of SEEDO declares emphatically.

Despite this clear decline in the quality of life of the child and, later, the adult, the WHO reminds us that, around the world, there are some 170 million children (under 18) who are overweight. Most correspond to upper middle-income countries, and the least to the group of low-income countries. However, the overweight issue is on the rise in almost all countries, and the prevalence is rising more swiftly in low middle-income countries. This is the reason why our institution encourages and urges governments to implement strategies to prevent childhood obesity.

What are the shopping habits of the Spanish?

Last March, Fundación MAPFRE and the CEU San Pablo University in Madrid published the report whose title in English is Diet, Society and Food Decisions in 21st Century Spain. The aim was to discover the impact of lifestyles on the shopping and consumption habits of the Spanish nowadays. Some of this report’s results show that there is now more widespread concern for our diet, as well as increased interest in “healthy” eating. This is made clear by the fact that, in the past two years, Spanish households have increased their food budget. Seven out of every ten Spaniards set aside between 150 and 450 euros a month to spend on food, which represents a slight increase compared to 2015. This trend is also reflected in the fact that families currently spend more time shopping and consume fresh products more frequently. Almost four of every ten families (38 percent) usually buy vegetables and fruit daily, or three or four times a week. This shows that, generally, they are seeking healthier food options (92.6 percent).