Jawlensky. The Landscape of Portraits 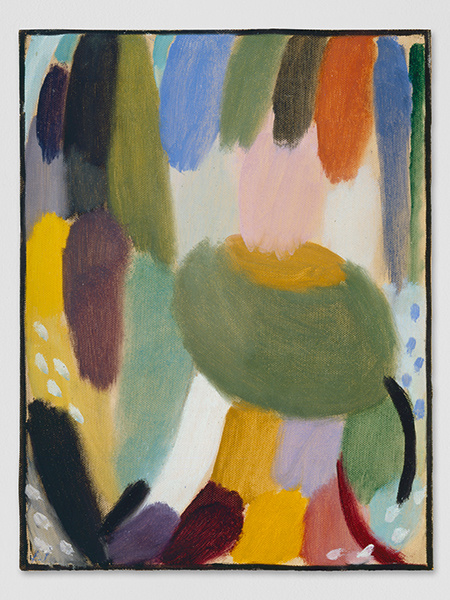 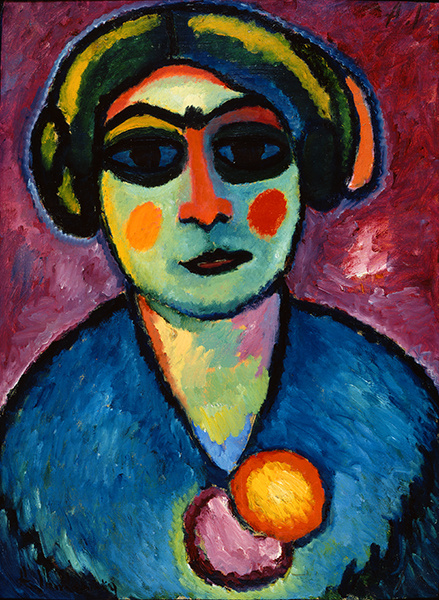 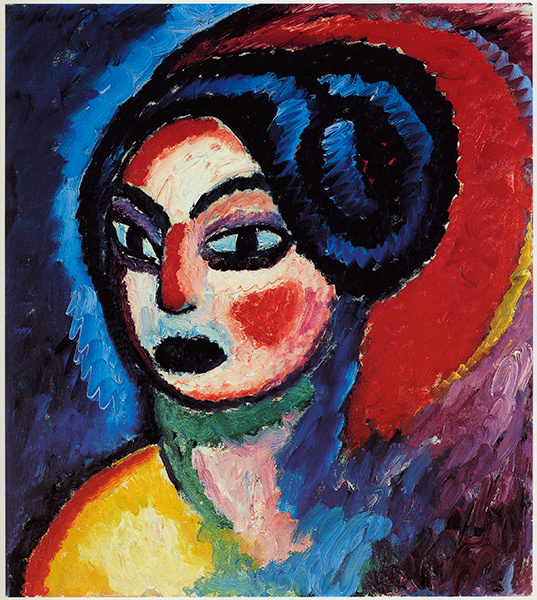 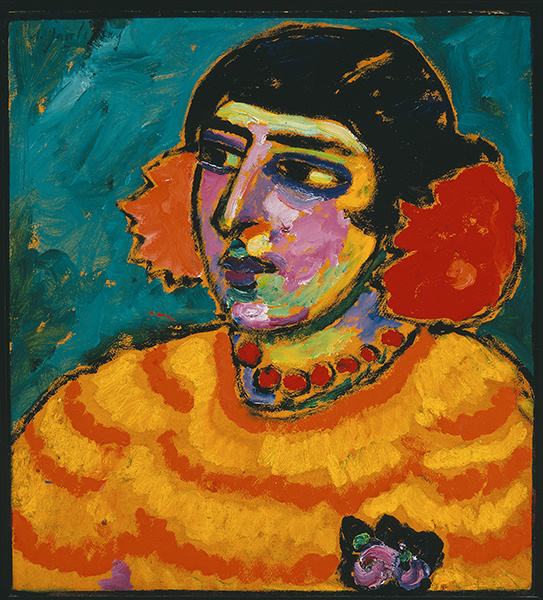 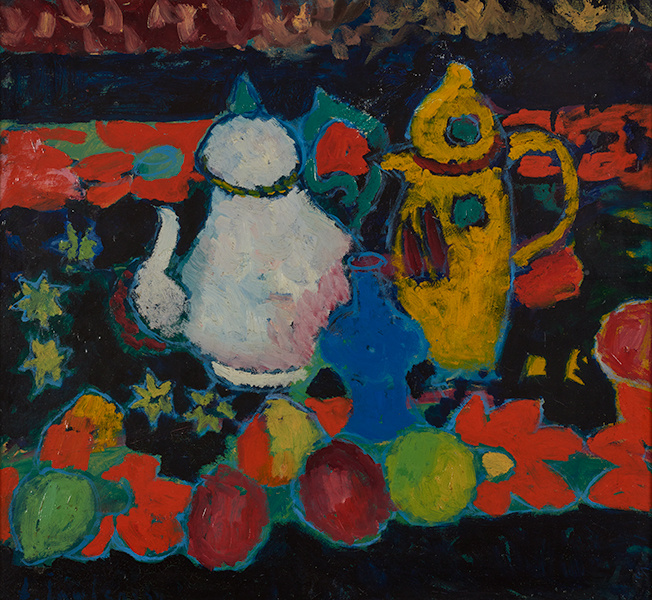 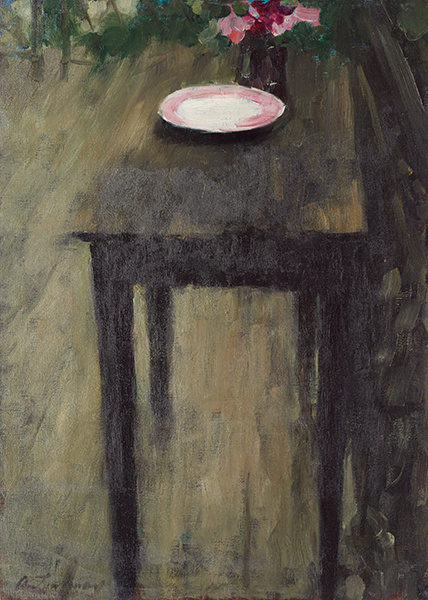 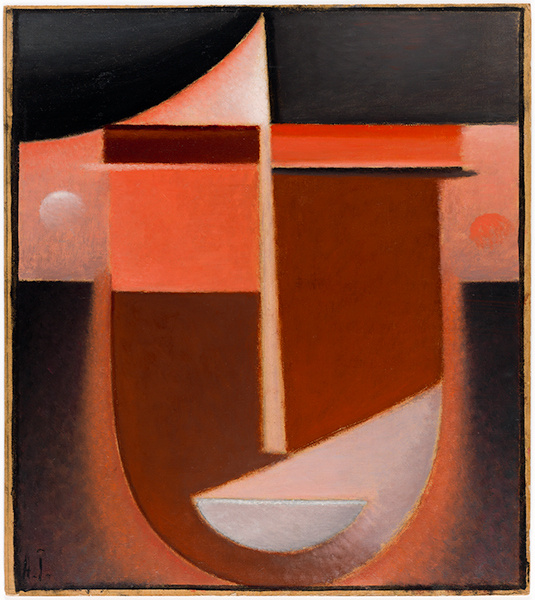 Co-organized by Fundación MAPFRE, the Musée Cantini in Marseille and La Piscine – Musée d’art et d’industrie André Diligent de Roubaix, this exhibition is curated by Itzhak Goldberg and can be visited in the Fundación MAPFRE Recoletos Hall in Madrid from February 9 through May 9, 2021.

“Everything is as simple as possible. I found myself when I understood that my inner self, my outlook on life and my interest in art are so intense that they call for another way of thinking; in the end, the persistent feeling of the color of nature lives in me. […] I encounter immense joy at work and I seek my own way of expressing my impressions.” With these words, written in 1909, the Russian painter Alexei von Jawlensky (1864-1941) expressed the change his work had undergone following his apprentice phase in Saint Petersburg, given that, on arriving in Munich he had found the way to express “feelings, passion and spontaneity” in his paintings.

Jawlensky was one of the artists who participated in the formation of The Blue Rider group in 1911 and, together with his friend and colleague Wassily Kandinsky, is today considered one of the fathers of German expressionism. In both Munich and the town of Murnau, the artist became one of the fundamental figures for the development of a free language, in which color and form served to express the most intimate feelings of the artist. Despite the profound evolution of his oeuvre, which covers such genres as the still life or landscape, it is the portrait – and, in particular, his studies of the human face – which most clearly characterizes Jawlensky’s pictorial production, given that it is by way of this genre that the artist believed he could achieve the spirituality he so yearned. From his heads series of the prewar period, up to the Mystical Heads, the Geometric Heads and the Meditations, his paintings reveal a constant tension between the portrayal of the individual and that person’s reduction to an archetype.

There are two events in the life of Jawlensky that seem to have marked this spiritual, almost religious quest, which he relates in his memoirs, dictated four years prior to his death. Regarding the first, he narrates the impression made on him, as a child, when he saw an icon of the Virgin in a Polish church called Kostjol. The second refers to his visit to the Universal Exhibition in Moscow in 1880: “At the end I discovered the section dedicated to art. There were only paintings and I was touched by God’s grace, just like the apostle Paul at the time of his conversion. My life was totally transformed by it. Since that day, art has been my sole passion, my sanctum sanctorum, and I have devoted myself to it in body and soul.”

The exhibition offers a broad chronological overview of the painter’s career and contrasts his works with those of various different artists who had an influence on him, most notably André Derain, Henry Matisse, Marianne von Werefkin or Gabriele Münter

The association between spirituality and art is particularly evident in the mind of the Russian people, for whom the religious icons do not so much represent the visible reality, but rather an abstraction of the divinity. In some way, Jawlensky dedicated a good part of his career to producing modern icons, with which he started out early in his career and to which he returned in his final works, the Meditations. The tendency we always have to seek a human form for any representation makes the face an object that is conducive to experimentation. For Jawlensky, it brings together what is legible and illegible, the seen and unseen, and thus, in the latter, manages to combine two areas that have always been considered mutually exclusive in the history of art: imagination – the icon itself – and its formal execution – abstraction.

As pointed out by the exhibition’s curator, Itzhak Goldberg, we can see how “the two events that really left their mark on Jawlensky are situated midway between art and religion, something which really indicates the short distance that, for him, separated these two spheres.” With respect to his insistent study of the human face, Jawlensky wrote: “I felt the need to find a form for the face, because I had come to understand that great painting was only possible with a truly religious sentiment, and that could only be captured with the human face.”

The selection of works in the exhibition Jawlensky. The Landscape of Portraits which Fundación MAPFRE is presenting in its Recoletos Hall offers a broad chronological overview of the painter’s career set out in six sections and contrasts his works with those of various different artists who had an influence on him, most notably André Derain, Henry Matisse, Marianne von Werefkin or Gabriele Münter.

Landscapes, portraits and still lifes from this period illustrate the first direction taken in Jawlensky’s artistic evolution, as they clearly reveal the legacy of his maestro Ilya Repin, but also the first signs of his own style, influenced by Van Gogh and the Post-Impressionists. In 1905, at the Salon d’Automne in Paris, he was really impressed by the works of “the fauves”, who were also exhibiting there. He returned to the French capital in 1907 and encountered paintings by Cézanne, as well as by Gauguin, from whom he took the idea of painting flat surfaces with vivid colors and precise contours.

In Munich, where he lived from 1896, he got to know some of the most influential avant-garde artists. In the company of Kandinsky, Münter and Werefkin, he spent several summers from 1908 in Murnau, in Upper Bavaria. The next year would prove crucial for the painter, as the strokes of his works were clearly increasingly confident and the strength of the color nearly overpowering.

These heavily stylized heads with their intense, garish colors reveal faces with wide-open eyes and marked pupils that pierce viewers without seemingly looking at them, as though the artist were seeking something beyond the human being.

From 1913 they underwent some changes: the colors started edging toward brown and ocher tones, chins were more pointed, eyes and nose were increasingly angular, as if he needed to lean toward the icon to reach some kind of serenity that could distance him from previous compositions with more vivid colors.

Variations on the landscape theme

In 1914 all Russian citizens found themselves forced to leave Germany within forty-eight hours. The painter then went into exile with Marianne von Werefkin and her family in Switzerland. There, isolated from everything, he sought a new direction for his artistic career. He abruptly abandoned the face motif that up to then had been his dominant theme and started depicting the same scene over and over again with tremendous freedom and chromatic experimentation. This marked the start of the Variations, whose title suggests the musicality of the works, and the seriality of his production. Small works that, with their vertical format, questioned the horizontal presentation traditionally afforded to the landscape genre.

The Mystical Heads coexisted for some time in Jawlensky’s work with the Variations, whose production he interrupted in 1921. These are stylized faces in which the nose takes on an L shape and the mouth is suggested by a simple line. The ears have disappeared and large, almond-shaped eyes stand out, although they sometimes remain closed. All these characteristics continue in the Savior’s Faces, which the artist initiated around the same time. Paintings with religious titles that he continued until 1922, in which the faces became increasingly rigid and occupied the entire surface of the canvas.

I felt the need to find a form for the face, because I had come to understand that great painting was only possible with a true religious sentiment, and that could only be manifested with the human face

In these oval faces – which Jawlensky started in 1918 and on which he worked continuously until 1935 – the eyes are already sealed. This is the first time that he produced a series of paintings in which open eyes are not present, as though the artist – and also the depicted face itself – were looking inward, toward an inner world without actual contact, but producing a spiritual connection with the spectator.

The geometrical, inscrutable aspect of these compositions is accentuated by the vertical and horizontal lines that make up the face and suggest the hair, as though the artist were creating icons, in a process based on this type of artistic manifestation and to which he finally returns. Because, as the artist himself pointed out, “in my view, the face is not simply the face, but rather the whole cosmos […]. The entire universe is reflected in the face.”

In 1921, in an attempt to force his separation from Marianne Werefkin, Jawlensky moved to Wiesbaden where he held a solo exhibition and participated in a variety of group exhibitions. It would be Emmy Scheyer, a friend and muse, who championed the artist’s work in both Germany and the United States, providing relief for the painter’s precarious economy and his complicated state of health, since he suffered from crippling arthritis that would prevent him from working in his latter years.

In Meditations, the human face undergoes a definitive process of metamorphosis. The forms are reduced to a minimum, contrasting sharply with the color, which maintains tremendously expressive power. The increasingly dark tones are applied with broad, dense brushstrokes. When it has not completely disappeared, the face invades the pictorial surface and, as the chin is cut off by the frame, what we observe is a severely reduced part of the face, in a composition that blends the icon and the cross.

With these works, the evolution of Jawlensky’s art comes full circle. It is as though, throughout his whole career, he had progressively divested himself of any narrative and expressive anecdote that might distract him from the very essence of painting and the spiritual, ascetic quest which always haunted him.