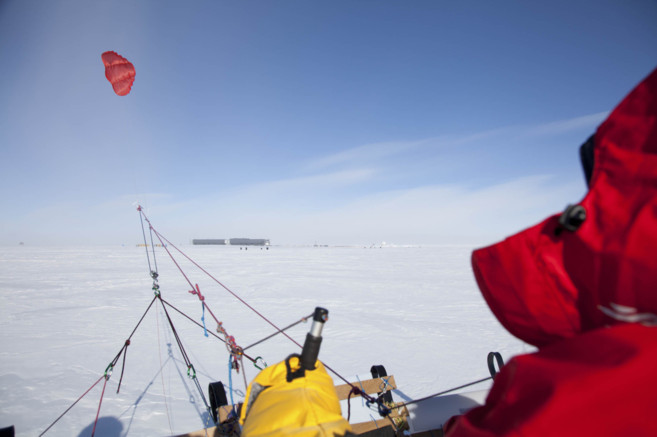 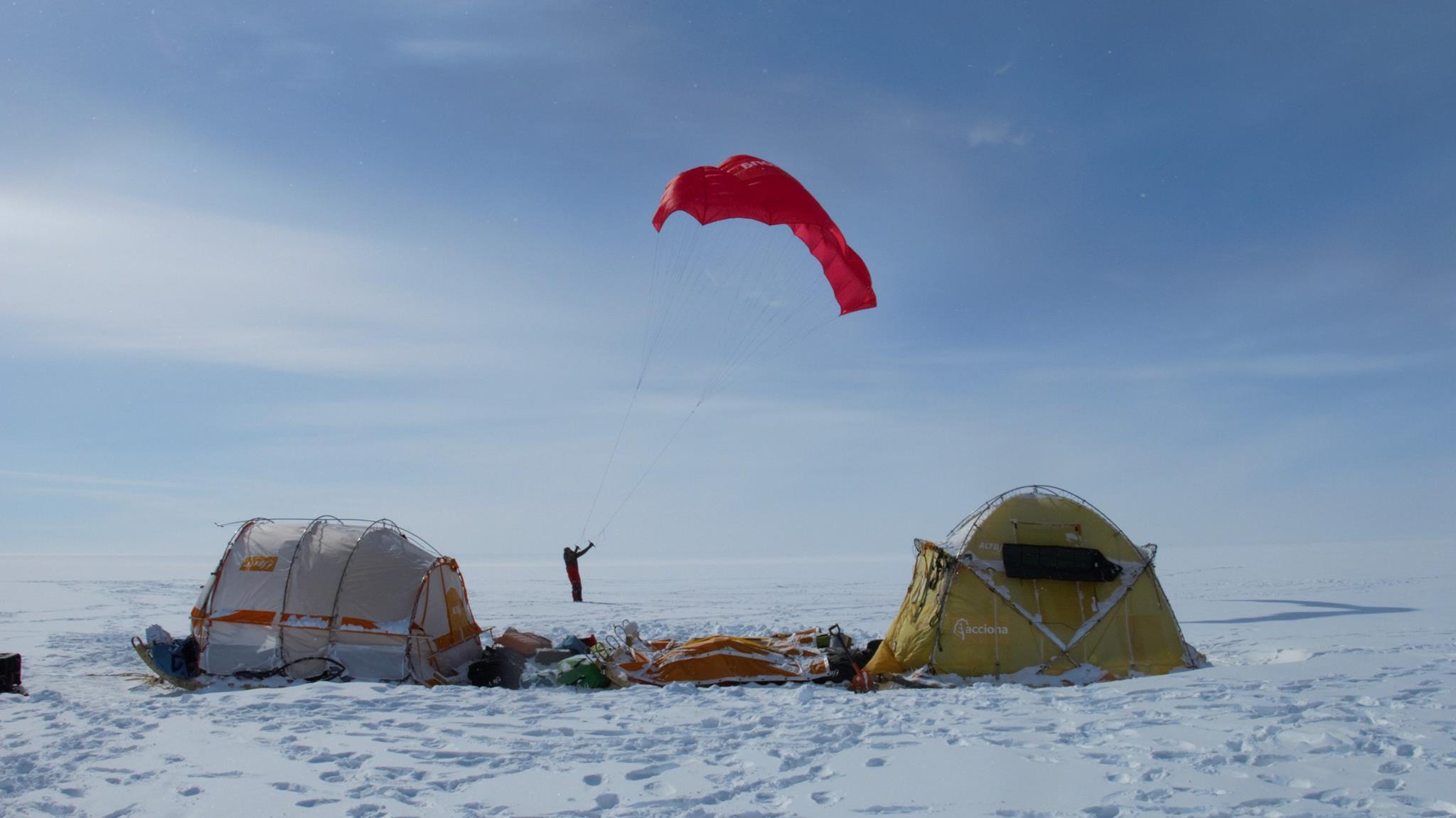 «The windsled is the first windpowered vehicle driven by efficient, zero-emission energy»

Ramón Larramendi, born in Madrid, is one of the most important polar explorers of the 21st century. Over thirty years he has undertaken numerous trips to the polar regions, most noteworthy being the MAPFRE Circumpolar Expedition (1990- 1993) which was to become the most important Spanish geographic expedition of the 20th century. Ever since 1999 he has been working on the development of the windsled, the first polar vehicle driven by renewable energies. We took advantage of this project’s presentation at the CSIC (Spanish Scientific Research Council) to chat about his lengthy career.

When and how did your interest in exploring the polar regions arise?

I’ve had that vocation since I was a child. I believe I was eleven or twelve when I read a book in our library at home about polar explorations and that book sparked my passion for the poles. At the age of 19 I crossed Iceland and that was my first semi-polar expedition. The next year I participated in the first Spanish expedition to cross Greenland. In 1990, I organized and participated in the MAPFRE Circumpolar Expedition, a major milestone for exploration, in which four of us – Manuel Olivera, Antonio Martínez, Rafael Pechi and myself – traveled 14,000 kilometers, from Greenland to Alaska, mounted on dogsleds in the traditional Inuit fashion. That was an amazing experience and the expedition received extensive media coverage, even warranting an article in National Geographic. Looking back at it today, with the perspective of these past 30 years, I believe that the MAPFRE Circumpolar Expedition marked the end of an era in which, over three years, we got to know most of the Arctic settlements and lived with the last surviving hunters of the whole Arctic.

How did the idea of the windsled arise?

The windsled project is the result of the experience acquired on the MAPFRE Circumpolar Expedition, as we have used all the know-how accumulated throughout those three years in which we learned how to travel through the arctic region in the traditional Inuit fashion. After that expedition, I traveled with the team from the TVE (Spanish state television) program Al filo de lo imposible to the Magnetic North Pole in 1998 and, in 1999, to the Geographic North Pole. It was on this second trip that the idea of solving the last great enigma of polar exploration arose: how to navigate the icy surface as though we were on a boat.

This form of crossing frozen expanses is highly innovative.

Indeed it is. The windsled is the first wind-powered vehicle driven by efficient, zero-emission energy to travel across Greenland and Antarctica. The idea came about when we combined traditional Inuit techniques with the best of today’s technology. We are pioneers in this field. There’s no other team in the world currently working on the development of this form of transport. 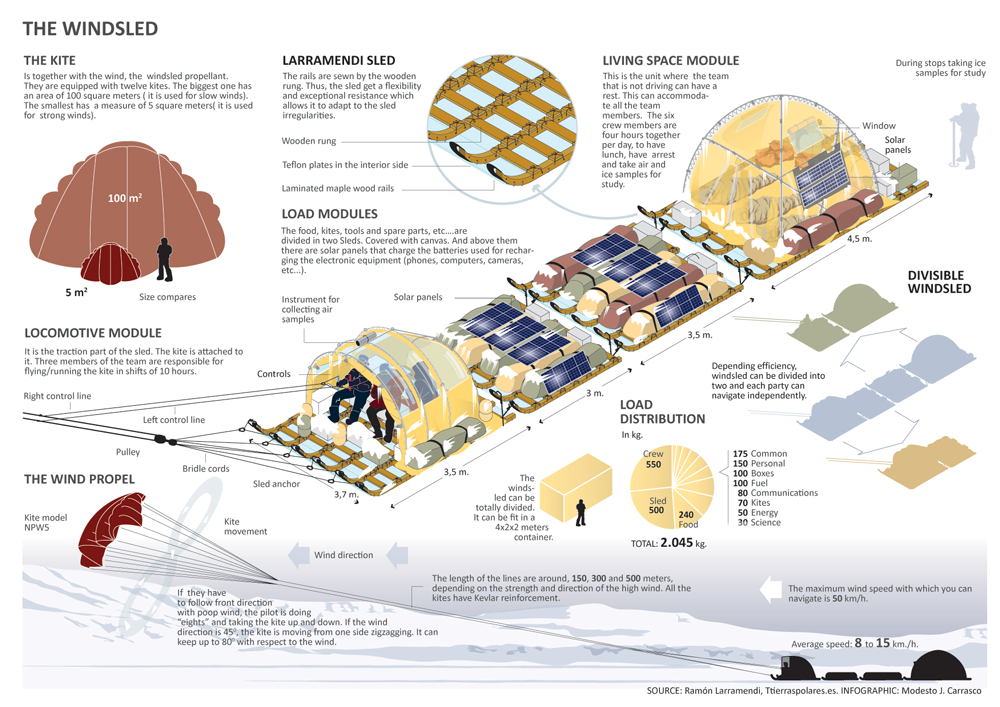 You incorporated wind power to the traditional Inuit sled.

The Inuit sled is a tremendously versatile means of transport. I added a kite to the construction as a logical way to harness the power of the wind and propel it. We set up a tent on the sled like a ship’s cabin, following the tradition of the Inuit who sleep on their sleds. The idea of combining these two elements – the wind and the sled – is very simple and also efficient. Over the years of polar exploration, many systems were employed and the explorers who triumphed, such as Admunsen or Peary, did so because they knew how to take advantage of the teachings of the Inuit. In this project, the key to success is its straightforward, simple nature. The underlying concepts are a blend of survival techniques and a philosophy applied to the travel conditions.

The sled has progressively evolved and ten prototypes have already been built.

Indeed so, and we have carried out eight major expeditions with them, constantly experimenting on a trial and error basis. Each trip showed us the model to be followed for the next one. The current sled is 14 meters long and comprises four convoys which can transport some 2,500 kilos and carry six people on board. It has a possible range of thousands of kilometers.

Have you experienced any critical moments on these expeditions?

In all this time we haven’t suffered any mishap, except for last year when the sled loaded with 2,000 kilos ran over Karin Bouzen, a Danish woman who formed part of our team, but luckily the accident had no serious consequences. But, logically enough, there are times when no progress can be made as there’s no wind, or when the wind is too strong or against you. You generally encounter good conditions for making headway 60 percent of the available time. It is essential to select the most  suitable route with areas where there is a tailwind.

The temperature is extreme.

The temperatures we endure on the sled vary according to the area. In Antarctica it can reach fifty degrees below zero and, in Greenland, where the temperature is relatively mild in polar terms, the average temperature can be around twenty degrees below zero. Particularly in the Antarctic, it’s essential to optimize heat and we manage to achieve a greenhouse effect with the tents so that we get the most out of the hours of sunlight.

«The MAPFRE Circumpolar Expedition marked the end of an era in which, over three years, we got to know most of the Arctic settlements and lived with the last surviving hunters of the whole Arctic” » 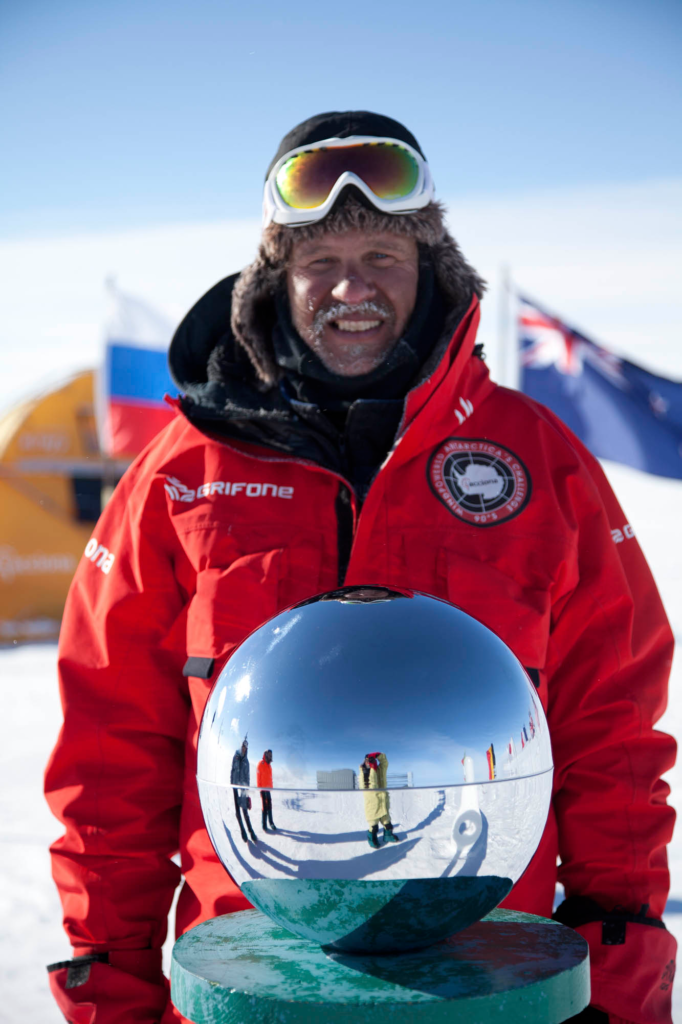 The windsled has now become a mobile scientific exploration laboratory.

I’ve been working on the development of the windsled for eighteen years and, of those, seven have been devoted to proving it was possible to cross the ice on it. The first phase culminated with crossing Antarctica in 2005-2006. Since then we’ve been working on how to convert it into a mobile polar research platform for teams of Spanish or international scientists. The current model has a modular structure that enables its modules to be configured independently, depending on the equipment to be transported. The idea is to increase the number of researchers who can travel on the sled and enhance the system so that increasingly complex work may be carried out on board. This system is totally ecological and also highly economical. Our ultimate goal is that, in the next few years, thanks to the windsled Spain will be able to set up a national research program in the interior of the Antarctic continent.

On your various journeys, you have witnessed climate change firsthand.

Absolutely, ever since my earliest trips to Greenland thirty years ago now, I’ve seen the changes and they are enormous. The retreat of the glaciers is a wellknown phenomenon but, above all, I’ve witnessed the shrinking icefield, the floating sheet of ice that forms in the polar ocean regions. The reduction of its surface area has been so great that the route I took in 1990 from Greenland to Alaska is impossible nowadays. I’ve traveled several times to the Geographic North Pole and the changes to the icefield in the Arctic Ocean have been truly radical. It’s no longer possible to undertake expeditions to the Geographic North Pole. One of the big questions is when will the Arctic Ocean experience its first ice-free summer. We’re very close to that happening. This thawing process has occurred very quickly and I’ve particularly noticed this acceleration since 2004 and 2005.

What can we do to avoid, or at least reduce, the impact of this global warming?

This is a very complicated issue to resolve, as CO2 emissions haven’t fallen. I believe we are seeing a positive change in our energy model, but it’s a very slow change. In order to significantly reduce the environmental impact, in my view some 20 years will be needed. However, there are obviously many small positive measures that can be adopted.

What are your upcoming projects? Will you continue exploring?

At the moment I’m still carrying on with the windsled project, which is at a very advanced stage. For me, as an explorer, this is a high point in my career, a way to round off this long history of explorations. Once this project is completed, I’ll be more heavily involved in dissemination and conservation initiatives. 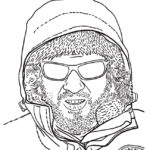 RAMÓN LARRAMENDI Born in Madrid in 1965, at the age of 19 he first undertook a 400 kilometer (250 mile) journey across Iceland on crosscountry skis and has not been able to stop ever since. He then achieved a historic milestone with the MAPFRE Circumpolar Expedition. For three long years (1990-1993) this explorer traveled 14,000 kilometers (8,700 miles) using only dogsleds and kayaks. From 1998 onward, he used his windsled – the first wind-powered, zero-emission vehicle – in all his expeditions. Author of several books, he also founded and now runs the Tierras Polares [Polar Lands] travel agency.