Hell According to Rodin

At its Casa Garriga Nogués Hall in Barcelona, Fundación MAPFRE presents the exhibition Hell According to Rodin, which may be visited from October 11, 2017 through January 21, 2018. This display invites the public to explore the creation of one of the icons of the fin-de-siècle art world: The Gates of Hell by Auguste Rodin.

Considered the central work of the French sculptor’s career, having worked for more than twenty years on it, this monumental work offers a spectacular view of hell, frenzied and tempestuous, yet also sensual and evocative.

In 1880, the French State commissioned Rodin, at that time still a little-known sculptor, to create a portal for a future Museum of Decorative Arts. This assignment, modest in principle, quickly became the most important project of his career. Over the following decade, the artist worked feverishly on the architectural dimension of the Gates, reflecting on the composition of the sculptural group, as well as the characters that arise, mill around and emerge from it. Rodin took the Inferno from Dante’s Divine Comedy as his source of inspiration, but as he progressed with the work, he became increasingly influenced by the ambiguity and sensuality of The Flowers of Evil poems of Baudelaire, which he illustrated in 1887-88.

The numerous groups and figures of the damned which Rodin included in The Gates of Hell constituted a veritable repertoire of forms he would return to until the end of his career, with ever-renewed inventiveness and expressive capacity unprecedented at that time. Fascinated by the body, whether painful, violent or erotic, Rodin designed, modeled and incessantly reworked his creations in order to capture and express all the impulses of the soul. Many of his best-known works arose from this project. Among them, The Thinker, The Kiss, Ugolino, or The Three Shades. A reading of The Gates of Hell therefore enables you to appreciate the majority of Rodin’s oeuvre. It offers a synthesis of his stylistic research and a starting point for numerous variations made possible by his preferred techniques: fragmentation, assembly, enlargement, reduction, repetition, the unfinished… 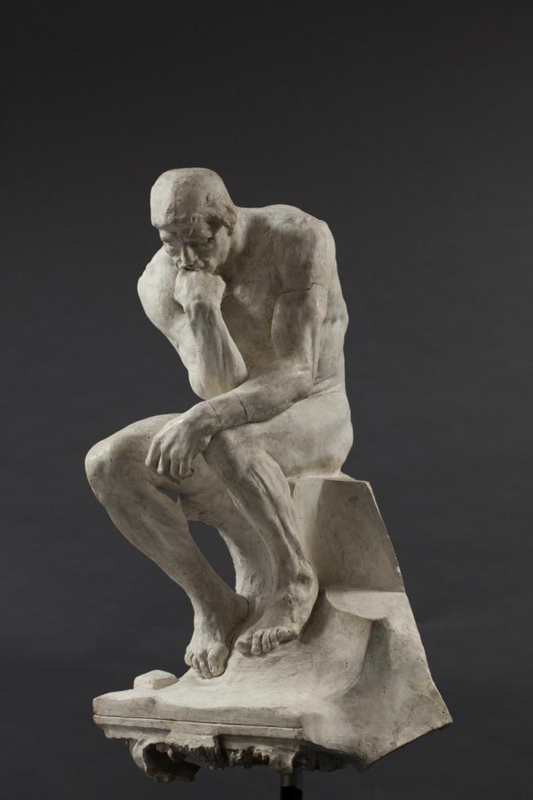 The exhibition brings together a hundred sculptures and some thirty drawings, of tremendous expressive force and delicacy, which have rarely been on display, as well as several early figures and maquettes that allow us to follow the sculptor’s creative process and the evolution of the portal over the years. Thus, this exhibition allows us to admire The Gates of Hell and the sculptures that formed part of, or emerged from, it but also to observe the evolution of Rodin’s whole career, and witness the creation process of one of the most emblematic finde-siècle artists.

The Hell According to Rodin exhibition has been organized by Fundación MAPFRE and the Musée Rodin in Paris, with exceptional loans from this museum.

The exhibition begins with a small section given over to the initial designs, both on paper and in three dimensions, which Rodin produced in order to determine the overall structure of the portal. These initial proofs show how the artist was initially inspired by renaissance models such as The Gate of Paradise by Lorenzo Ghiberti, with a geometric, rational design, and how, little by little, he threw off the shackles of that rigid approach to create a more complex, interwoven portal, which better reflected the fin-de-siècle spirit.

These early concepts also allow us to observe how he approached the principal figures from the very beginning: The Three Shades — an evolution of the figure of Adam, which at first was going to flank the door together with Eve; The Thinker — which represents Minos, the judge who assigns each of the damned to one of the circles, but also Dante meditating upon his own work and, by extension, any creator and, even, Rodin himself; and Ugolino or The Kiss are all already recognizable in the earliest sketches of the Gates. 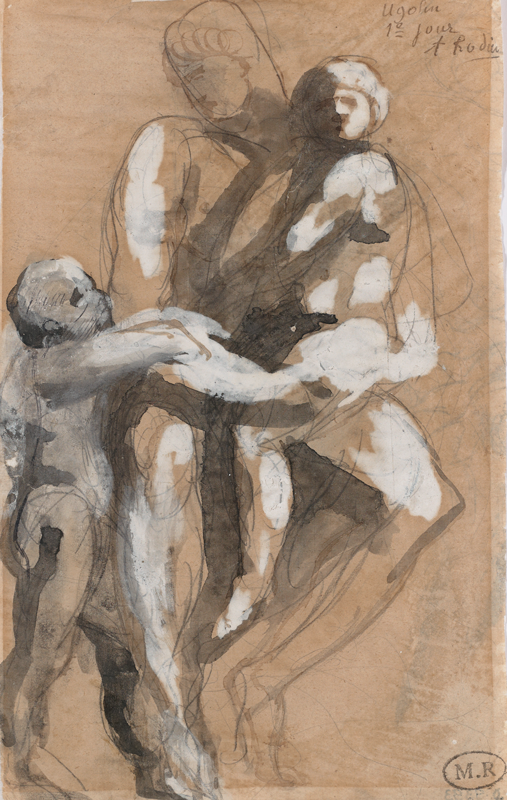 The inspiration of Dante

The second section of the exhibition explores the way in which Rodin interpreted the Inferno from Dante’s Divine Comedy. Like many other artists before him, Rodin was fascinated by the Italian poem, written in the early 14th century by the Florentine poet Dante Alighieri. At no time did the sculptor intend to offer a linear reading of the poem, nor describe the nine circles Dante passed through to reach Paradise; rather, he sought a free interpretation, in which he moved away from the anecdotal and strove to convey the essence of the suffering of the damned. His links to the text are subtle, sometimes tenuous, and it is often the notes accompanying the works, particularly the drawings, which enable us to comprehend his relationship with the Divine Comedy.

Rodin shows special interest in certain episodes, which he develops in numerous drawings and sketches before sculpting them, while others are ignored. Thus, for example, the story of Count Guido da Montefeltro, which occupies a residual place in Dante’s poem, appears to have greatly interested Rodin, who devoted a large number of drawings to it. He also produced many drawings and sculptures related to the story of Paolo and Francesca, and to that of Ugolino devouring his children; but, in general, his efforts were centered on the representation of anonymous condemned souls – which he often refers to as ‘shadows’.

Most of the figures which Rodin produced at that time were men who were lost in thought, engrossed in their own fate as they reflected on their guilt and punishment. As time went by and the work progressed, Rodin moved ever further away from the initial source. The motifs he created began to take on new meanings and to adapt to new inspirations. Indeed, as they were not very defined, most of the drawings inspired by Dante could refer to several themes taken from his Inferno and they lent themselves to further research on completely different topics, suggesting interpretations that could prove contradictory. The motifs created by Rodin had a polysemous dimension, as had most drawings and sculptures from the early 1880s onward. 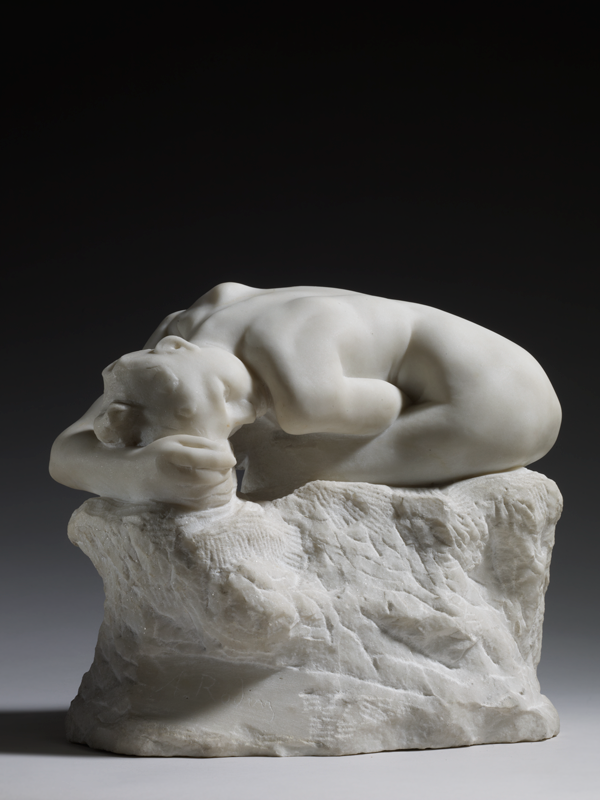 In the mid-1880s, Rodin was commissioned to illustrate a copy of The Flowers of Evil by Baudelaire, one of the works that would have the most influence on the sensitivity of this French finde-siècle artist. As was the case with Dante’s Inferno, Rodin did not so much work as an illustrator, but rather responded to those poems, which revolve around human passions. He often attempted to transcribe the atmosphere of a few verses, instead of trying to summarize the poem as a whole.

The third section of the exhibition shows the relationship between the drawings made for The Flowers of Evil and the sculptures that form part of the Gates, a reflection on the transformation of the work influenced by the spirit of Baudelaire’s poetry. The poems that make up this work had an immediate influence on Rodin and, therefore, on the forms that he was creating for The Gates of Hell, affording them a much more ambiguous, sensual nature. In contrast to his earliest figures for the Gates, in which he reflected primarily on the punishment, Rodin now moved on to meditate on temptation and its consequences.

He swiftly abandoned the moral vision of the world put forward by Dante and replaced it with a vision that was amoral – did not pass judgment on those condemned – and much more intimate, in which the Inferno ceased to be a place and became a state of the soul. Women began to play an increasingly leading role, as they are exhibited more toward the spectator and interact between themselves. The Gates are thus loaded with eroticism, dynamism and voluptuousness. 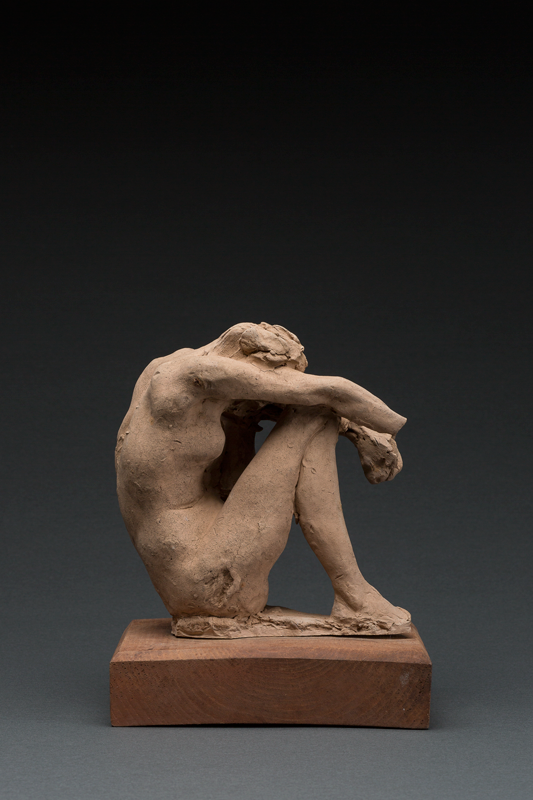 The endless search for ideal moldings The next section is dedicated to Rodin’s preoccupation with the more architectural aspects of the Gates. Given that the museum for which the Gates was intended had not yet been built and, therefore, he knew nothing of the appearance of the façade in which the Gates were to be integrated, the sculptor was forced to create an architectural structure of his own. The Gates obviously became an autonomous work that would never have been able to be opened, but is influenced in a number of ways by this origin. In principle, it had to serve as an entrance, a means of accessing a special place, but also had to show visitors and passers-by, in the public space, an example of what the art of his time could produce in the field of sculpture applied to ornamental work.In the absence of an architectural project in which it should have been inserted, Rodin conceived not only the door panels, but also the whole surround. The Gates are thus organized through large vertical and horizontal lines, which Rodin enlivened with various moldings, and with prominent volumes that create a highly powerful play of light and shade. For this he drew inspiration from the countless civil and religious buildings he admired on his travels around France and Italy throughout his life, with a predilection for the late Gothic and early Renaissance. He compiled graphic documentation consisting of pictures pasted on the pages of an album and architectural drawings made directly in front of the monuments, which he continued producing even after he abandoned work on the Gates. However, he modified the characteristics of certain elements of the traditional decorative vocabulary such as the acanthus leaves and foliage, creating profiles which, from the base right to the top, are varied and never identical. 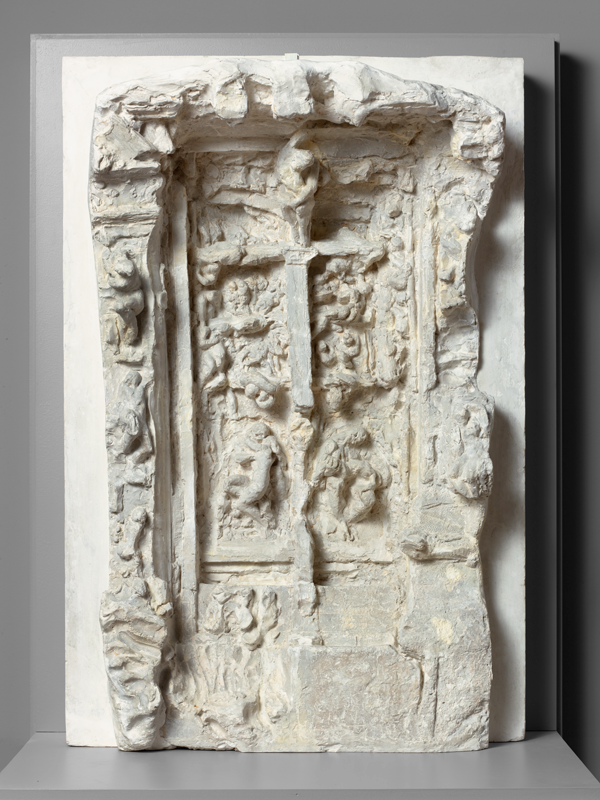 Live forms, beyond the Gates

Finally, the exhibition closes with a large section that recounts the evolution of the Gates, paying special attention to the independent existence of many of the figures created for it. At the end of 1880, the project for the Museum of Decorative Art was abruptly abandoned and the Gates were left without a destination. Already a renowned artist, Rodin received several important commissions that were to keep him busy for the best part of the next decade. It was then that he ceased working on The Gates of Hell, although it remained in his studio, like a huge backdrop. However, when he was nearly 60 years old, he decided to return to it and put it on display at the Alma Pavilion, the major retrospective exhibition organized on the occasion of the Universal Exhibition of 1900. For reasons that are still unclear, Rodin exhibited his masterpiece devoid of all the figures that made up the work, which left the public and critics totally disconcerted. The Gates were then left practically abandoned and it was not until the end of his life, in 1917, when he decided to recompose it in order to be able to finally cast it.

Over that period of intense creation that started in 1880, Rodin had designed a huge repertoire of figures and sculptural groups. Despite the fact that they were not all integrated in The Gates of Hell, or at least not immediately, from that date up to the end of his career, the sculptor reused figures, groups and fragments that were transformed into the starting point for a large part of the remainder of his work. Some of these motifs became autonomous works and were exhibited in plaster or other materials such as bronze or marble, while others were assembled with different elements, giving rise to new works. Yet others were enlarged in a complete or fragmented form from 1890 onward. This process resulted in a profound modification of their physical presence in the eyes of the spectator and means that they can be considered new versions of old works. This is the case of such emblematic works as Despair, Fallen Caryatid and even The Thinker and The Kiss.