In 1977 Nixon started exploring the banks of the Charles River, near Boston. This project would continue through to 1982. During this time he refined his expertise in the use of a large-format camera, as though it were a lightweight manual camera that could go unnoticed, although his work system was based, precisely, on a collaborative process. Nixon earned the trust of people and got them to reveal that boundless natural quality that makes these images so real. They never lose their spontaneity and authenticity, despite being a continuous display of composition skills. 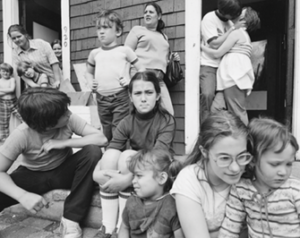 Hyde Park Avenue, Boston, 1982 is an extraordinary example of that composition which became ever more complex as the series advanced. However, the way he handles the framing is resolved in such a way that it becomes invisible and center stage is taken by the family, social and psychological connotations surrounding these marginal groups. The atmosphere is just another character in the scene; mystery and reality blend together naturally, as in Faulkner’s novels, and it is easier to glimpse literary influences than photographic ones in these images.

But, did no one notice that there was a photographer in front of them with a gigantic camera on a tripod, all really old-fashioned, immortalizing that illuminated, spontaneous moment that would be forever recorded? Yes, it appears that the child in the upper-left corner is looking at the intruder, but what about the others? How many stories are we able to discern in this scene? Because, surprisingly, they all appear unaware of the photographer and everything, as in the photo, revolves around the upset girl in the center with the lost look. Perhaps something has happened that has irritated her and the guy on the left gives her a snide look belittling the matter; the girl in the background comes out the door with her brothers to see if she is still angry. In front of her, a mother with her child look out of the frame toward something that draws their attention; the group in the foreground likewise, but toward the other side and, finally, a couple kissing passionately at the back as though they were alone… Is it possible to find and isolate more stories in just one shot? I do not think so. But what this photograph teaches us is to stop and think about how active the photographer’s creative intelligence must be to recognize, anticipate and record what would never exist, were it not for this extraordinary framing.