Thanks, Kolkata. See you soon!

In April 2016, Alicia Ruiz Yebra (Madrid, 1968), the head of MAPFRE Volunteering in Spain, celebrated 25 years in the company. When she received the bonus awarded in these cases, she had no doubt that she would reserve a plane ticket to Kolkata to do some volunteer work there. She felt the need to give back to life a little of what it had given her. The previous year, one of her sons was diagnosed with a serious illness and, thanks to the help of many people, mainly work colleagues, her child is better today. This is her testimony, that of a tough, yet highly rewarding journey, like all the selfless acts of solidarity in which she habitually participates.

India is India. Loving and hating it in the same day are common feelings. It has the ability to leave no one indifferent. It’s a country I had traveled to on other occasions, but, in India, there are many Indias… I didn’t know Kolkata (formerly Calcutta) and I can assure you that it’s something else. It’s life in its purest form. With no frills. As soon as you arrive, you are thrown right into it. There’s no time to get acclimatized. It hits you hard. On the same day, it gets a thousand smiles out of you, but also many tears. This is the city of the poorest among the poorest. Kolkata has a no-nonsense approach. Right from your arrival at the airport, it doesn’t hold back – it shows itself as it is. It was no different for me and, from the first day, it taught me its rules. Life there is not a right, but rather a privilege and, as such, people give thanks and celebrate it daily.

I really wanted to collaborate with Mother Teresa’s Missionaries of Charity. I discovered that the way to do this was to simply arrive at the Mother House HQ unannounced and go to the address they give you to register as a volunteer. They welcome you there and ask your name, nationality and whether you have any special skills. The person who attended me gave me a big smile and said: “With your two hands and your heart you are welcome.”

The Missionaries of Charity have various shelter homes around the city. The registered volunteers are assigned destinations according to the needs of the moment. Mine was Nirmal Hriday, more commonly known as Kalighat, the home for the dying. This was the first center opened by Mother Teresa, where all her good works began. Shelter is provided there for people who are dying, literally, in the street. On arrival, they are first stripped of their tattered clothing and washed, as they are in such a state that it is often hard to even know what sex they are. 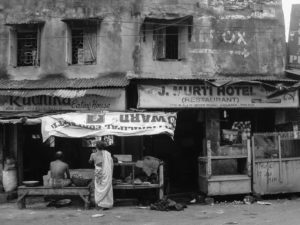 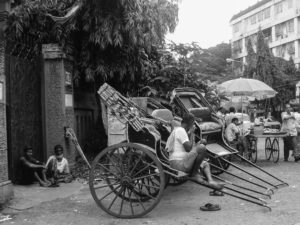 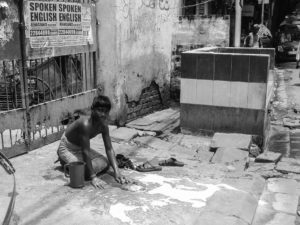 In Kolkata life is not a right, but rather a privilege and, as such, people give thanks and celebrate it daily

I cannot deny that this experience was really tough. There are many times during the day that events overwhelm you, that you find yourself doing things you didn’t even imagine existed. But, at that time, you have no time to wonder whether you are capable of doing it or not, as the important thing is to act. What I can assure you is that the experience was wonderful.

Volunteering is a truly humbling experience. Kalighat is a very special place. It is a peaceful place, a place where we encounter the tears of the dying and of those trying to find themselves, where frontiers do not exist, where no distinction is made on the basis of age, religion or class. You feel humble in the face of so much pain and so much respect.

I traveled alone, something that allows you to return to your essence and reflect. There were days when, walking along the street, I stopped, looked around and never ceased asking myself: “What do you see here that so draws you in?” The answer was always the same: the people. According to the census, Kolkata has 19 million inhabitants. It has an extreme climate, especially in August when the monsoon produces humidity levels of 95 percent, thus making the temperature even more difficult to bear. Its streets are more like garbage dumps, filled with people desperately seeking something to eat. It is the city of crows, rats, noise, pollution, pain, suffering, death and misery. Beyond the immediate landscape are the smiles, the struggle for life, generosity, love for others and respect. That is Kolkata.

At the end of the experience, when my airplane was taking off, I burst into tears. I said goodbye to my beloved India but, above all, my beloved Kolkata. I was exhausted. It had been really tough. Back in Spain, I must confess how happy I am to have gone there and that I’ll do my utmost to return.

Thanks, Kolkata. See you soon!