“Photography always transforms what it describes”

Peter Galassi, chief curator of the Department of Photography at the Museum of Modern Art (MoMA) in New York from 1991 to 2011, and curator of the Brassai exhibition, gives us his impressions of this exceptional photographer and an overview of the current state of photography. The Brassai exhibition is currently showing in Fundación MAPFRE’s Madrid exhibition hall, where it will remain until September 2, before traveling to the San Francisco Museum of Modern Art (SFMOMA).

He was a very intelligent and sophisticated child of the old Mitteleuropa, before World War I who embraced wholehearedly the adventure of modernism without losing touch with his cultural roots. In that sense he was not unlike the extraordinary gallery owner Ileana Sonnabend, who was born in Bucharest in 1914 and went on to champion such artists as Robert Rauschenberg and Bernd and Hilla Becher.

How did he contribute to photography?

Around 1930, on both sides of the Atlantic, a number of young artists discovered that ordinary descriptive photography — small black-and-white images on paper, devoid of all of the traditional signs of aesthetic distinction— could be the stuff of art. Collectively, they launched a new artistic tradition. Brassaï was one of them. Within that realm his contribution was an especially blunt and direct style that showed that photography always transforms what it describes, even when it seems to be at its most transparent. And he gave us the most eloquent and enchanting photographic version of the rich mythology of Paris at night.

Brassaï’s father was a scholar of French literature; you might say that he had literary erudition in his blood. After his native Hungarian, his first languague was German, and from his early twenties onward, Goethe was his key intellectual and spiritual guide. But Brassaï also mastered French, and his literary hero was Proust, and he wrote a very engaging book about photography in Proust’s great novel In Search of Lost Time. Among Brassaï’s closest friends were French poets such as Henri Michaux and Pierre Reverdy, and it is clear from his library (now at the Centre Pompidou) that he read voraciously in philosophy and history as well as literature.

What capacities does Brassaï have in other arts such as drawing and sculpture?

Brassaï’s drawings from his student days in Berlin (1920-21) are very impressive, and the best of the ones he made during and just after the Occupation of Paris are quite good as well. He loved to quote Picasso, who disdained photography and encouraged Brassaï’s drawing, and who said, “You own a gold mine but you are exploiting a salt mine.” To my eye the sculptures are somewhat less successful —or perhaps more variable in quality, for the best of them, such as the one from 1971 that is in the exhibition, are quite striking. 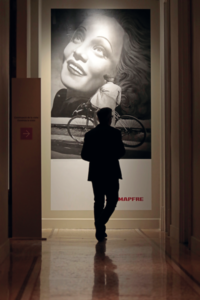 Throughout your professional career thousands of photographs have passed through your hands, but which of them or what photographer remains in your memory?

A great deal of what I have seen remains in my memory (at least until now). I have vivid a visceral recollection of the first prints that I saw by Diane Arbus —in 1971, when I was twenty— although I don’t claim that I recognized her importance right away. (It wasn’t an exhibition; someone showed them to me.) And I think I could close m y eyes and enumerate for you a very significant number of specific individual photographs in the collection of the Museum of Modern Art, where I worked for thirty years. Nor would I wish to choose one or even several favourite photographers (or artists or writers). The great thing is that we can have them all.

What museum is a benchmark for you? (the one you go back to time and time again)

I would say rather that museums —plural— are an indispensable reference for me. I live in New York, so I have most often visited the Metropolitan Museum and MoMA—though I also regularly visit the city’s other great museums, both for their temporary exhibitions and their great collections, to visit old friends such as Bellini’s St. Francis at the Frick or the Edward Hoppers at the Whitney. When I travel, museums —plural again— are always at the top of my list. Of course, if I lived in Madrid I might feel I could go to the Prado and simply never need to visit another museum. But I do not have that good fortune.

There is no longer any reason to use analog materials in photography. Digital does everything that analog can do, it does it faster, with a great deal less mess, and it doesn’t require a darkroom. (Just in terms of making the initial exposure: a digital camera shows you the image right away and eliminates the expense of film.) I would not go as far as my friend, the late Richard Benson, who insisted that henceforth photographs belong on screens —a judgment that was all the more stunning since he was such a master of photographs on paper and other fixed supports, which I continue to enjoy deeply.

What are your expectations/ thoughts about the future of the photograph

Telephones are no longer just telephones. Televisions are no longer just televisions. Photography is now thoroughly integrated into the digital ether that surrounds us and permeates our lives. What I care about most deeply is the artistic tradition that Brassaï helped to establish nearly a century ago. For the first three or four decades it was overshadowed by the magazine industry. Then it was muscled aside by the circus of contemporary art, and now it may be dissolving into the digital soup. And yet it remains a very rich and powerful art.