He is one of the most reputed psychiatrists in Spain and has been the Head of Psychiatry at the Ramón y Cajal Hospital (Madrid) for 25 years. His passion for teaching, clinical practice and research has led to his putting off retirement several times and remaining on the front line. This entails working in the basement of the Madrid hospital, where each week he sees approximately 20 people with mental illness, as well as at the Alcalá de Henares University (Madrid), where he trains the future generations of this medical specialty, stressing the importance of listening to and empathizing with patients.

He has a soft, calm tone of voice. He admits that he is accustomed to privacy, behind closed doors. Mental illness in Spain is still a major taboo; mentioning it is still something that is frowned upon. We interviewed Jerónimo Saiz (Madrid, 1948) in his office, first thing in the morning, shortly before his patients arrived to talk about their depression, bipolar disorder or schizophrenia, the fields he knows best. He admits that he finds it hard to smile. “All we doctors have difficult or incurable cases.”

What does your work entail?

This hospital’s catchment population is over 600,000 people. There’s a lot of work. We come across all kinds of mental illnesses, from mild ones such as anxiety and stress, which are increasingly common, to other more severe ones such as schizophrenia, bipolar disorder or depression, which is one of the most worrying. We have a hospitalization unit and a day hospital where we offer psychoeducation, which is designed to help families cope with the uncertainty, anger and frustration inherent in living with a mentally ill individual. Our goal is to treat patients just like any other sick person, not as a potentially unpredictable, violent or incurable individual.

What kind of people pass through your office?

Many of our patients fall ill in adolescence, when they are still young. This is the case, for example, with bipolar disorder, which takes up to ten years to be diagnosed and which already affects about two percent of the population. Most of the patients arrive here somewhat wary, some with hostility and distrust, but with the need for advice. Sometimes they come of their own volition, but often it is on the insistence of their parents, who also suffer a great deal. The patients are aware that something is wrong, but their disorder often distorts their perception and hinders their full collaboration. Many will require treatment throughout their lives. 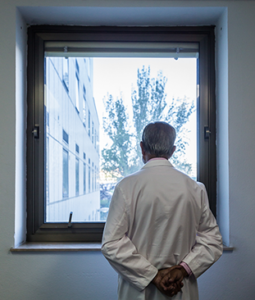 “There is a lack of resources, as mental illness is still not
a priority on the political agenda”

Without a doubt. This is an illness that is tremendously incapacitating, produces great suffering, has a huge economic impact and, in the most severe cases, can even lead to suicide. It’s an overlooked reality. Depression is difficult to detect and there are many patients who are never even diagnosed – nor, therefore, treated.

Is there a lack of resources?

Spain has improved greatly in research and, generally speaking, we have an excellent healthcare network, which, moreover, is public, free and universal, but resources always fall short. The health and social services are increasingly unable to cope with the increasing number of consultations for issues that, some years ago, were not problems. These are due to a highly diverse range of conflicts and maladies related to the workplace, family or partner, as well as emerging pathologies such as those related to addictions (alcohol and gambling) or eating disorders. Psychiatric centers also have no places available. Mental illness is still not a priority on the political agenda.

We go to the gym a lot, yet pay much less attention to our mental health. Are we not aware of its importance?

Indeed, mental health is just as important as physical health. There’s no health without mental health. We should take care of all the aspects that have to do with our emotional wellbeing, including the concept we have of ourselves, as well as our ability to solve problems and establish high-quality relationships. In addition, we should not suffer a difficult situation in silence, nor with a feeling of shame.. It’s important to recognize that one is going through a rough patch and needs to seek help.

What improves our mental health?

Maintaining important, significant social relationships is essential for our mental health. We must surround ourselves with positive people, those who enrich our lives. Generosity is another fundamental factor. Empathic people, those willing to share and who show gratitude, are more cheerful and therefore happier. The opposite occurs with negative people, who tend to be selfish and therefore less healthy, poorer and more solitary. 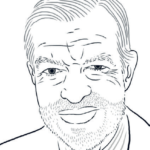 JERÓNIMO SAIZ
This Spanish psychiatrist trained at various health centers and international universities, and has been working at the Ramón y Cajal Hospital of the University of Madrid for over 20 years. He is currently senior researcher at the CIBERSAM (Mental Health Network Biomedical Research Center) in Madrid and a member of prestigious international scientific associations such as the International College of Neuropsychopharmacology and the American Psychological Association, among others. He has received numerous accolades, most noteworthy being First Prize at the “Juan José Barcia Goyanes” Clinical Neuroscience Awards.

Falls in the elderly, an avoidable evil