They are not criminals, they are children

The juvenile judge Reyes Martel is leading an innovative reintegration program in the Canary Islands, with the participation of Fundación MAPFRE Guanarteme. It consists of various educational, employment and sports programs designed to avoid children who have passed through her courts reoffending.

Judge Reyes Martel suffers a great many heartaches on a daily basis in juvenile court no. 1 in Las Palmas de Gran Canaria. The law obliges her to strive to reintegrate the kids who pass through there, but there are insufficient resources. For this reason, one fine day she threw caution to the wind and began to search everywhere for funding. And she managed it: she convinced several companies and institutions, including Fundación MAPFRE Guanarteme and Club Deportivo Las Palmas, to become involved in her project Up2U, which consists of various educational, employment and sports programs for children at risk of social exclusion.

It proves impossible not to believe the judge when she sets out her thesis with the conviction born of experience: children who commit crimes are not guilty; they can all become productive members of society if we offer them a way forward. “The important thing is to find out what is best for each of them. We are obliged to offer them a wide range of possibilities so that they can choose where they feel most comfortable. We must ask them, strive to comprehend them. It’s exactly the same as we do with our children: some of them like music, others math, others sport; if they are forced to do something they hate, we will fail,” she declares.

There are many cases that demonstrate what this judge highlights. She has seen it with her own eyes. “For example, a boy I met shortly after arriving at the juvenile court in Las Palmas in 2013. He was being held at the youth detention center on Tenerife. He had been sent there after having spent his childhood moving from home to home, with a father in prison and a drug addict mother. From a very young age he roamed the streets, took drugs and stole. At first it was impossible to talk to him; he refused or responded with violence. So we started studying what this kid might like. We discovered that he was a good cook and we offered him a course,” Martel recalls. From that moment, everything changed for that boy: he became a different person. He finished the course and was accepted for an internship in one of the best restaurants on Tenerife. A year ago, he set up his own restaurant.

The path laid down by the law is clear: punishment does not work with minors, but rather we must seek the appropriate reintegration measures in each case to ensure they do not reoffend. “Juvenile courts do not issue sentences, but rather measures,” Martel explains. “Basically, our job is to study on a case-by-case basis to find out why a minor commits an offense. There are many reasons: poverty, family problems, behavioral disorders, etc. Next, we issue a diagnosis and prescribe treatment for their social reintegration. The problem is that the administration has insufficient resources to implement such treatment. All the effort we put into our diagnosis in the courts is of no use if there are no funds available. And that is what led to me seeking finance elsewhere.” When the judge began her search for these resources, she found that there were already many companies working with minors as part of their corporate social responsibility plans: courses to learn trades, sports activities, internships… Some institutions, such as Fundación MAPFRE Guanarteme, maintain a specific range of programs for young people permanently active. All that was needed was to channel these diverse projects into a joint effort. This is how Up2U was born (the alphanumeric name referring to how success depends on the minors themselves). 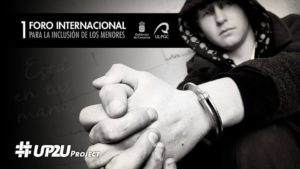 The project started last November with a major seminar in Las Palmas that brought together judges, prosecutors, lawyers, psychologists and educators to analyze in depth the most effective lines of work when dealing with minors. From that moment, donations started coming in and work began on designing the courses and activities that, as of today, are already up and running within the framework of the Up2U program. “It is important for private institutions to help the Administration to educate and train our children. Our children are everything. Between us all, we must take care of them, as the future of our society depends on them,” Martel cautions.

The judge is enthusiastic because many of the things she dreamed of are already coming true. However she also warns: we must not let our guard down. “These children are still malleable, they can all be rescued, but swift action is needed,” she insists. “Our system is too slow. We have waiting lists for measures to be implemented. If minors commit an offense and see that it has no immediate consequence, because what the judge dictates cannot be accomplished until six months later, they will continue offending throughout that period, as we’ve instilled in them a sense of impunity. What’s more, they grow up fast: teenagers can change a lot in six months. They may start using drugs or commit more serious offenses. Normally, everything gets worse. If we don’t act in time, they turn 18 with many more problems: from that age, everything gets more difficult.”

The healthy power of the banana

Fundación MAPFRE Guanarteme has contributed 20,000 euros to the Up2U project for the implementation of a vocational training program on banana plantations on Gran Canaria. This has helped 20 children who have passed through the island’s juvenile courts for having committed some crime.

After receiving technical training courses in agriculture, the children will spend the next ten months working on cooperative banana plantations so that they can learn the profession and find a job. “The benefit is twofold. Firstly, the kids learn a skill to be able to earn a living. And it also brings new enthusiasm into such a local sector as banana cultivation, which is currently running the risk of disappearing as ever fewer people want to work on the land,” says the judge Reyes Martel.

They are not criminals, they are children
0%Overall Score