Cafeteria or lunch box, fresh fruit or vending machine, going out to eat or sitting in front of the computer… Healthy eating is increasingly at the center of our working lives. And also in the health prevention strategies of companies. This topic was the subject of debate at the Food and Health in the Workplace seminar which Fundación MAPFRE and the Spanish Nutrition and Dietetics Academy organized in Valencia.

The legendary photograph Lunch Atop a Skyscraper was taken on September 20, 1932, during the construction of one of the Rockefeller Center towers in New York. The identity of the author remains unknown. As does that of the workers seated on a girder at a tremendous height, during their work break, their feet dangling above Manhattan. We are fascinated by how natural they look and imagine them chatting away, oblivious to the dangers of possibly falling. But, what if the danger depicted were not an industrial accident? What if the hazard lay in that mid-morning snack wrapped in newspaper?

Healthy eating has become the new field of interest for occupational health experts. “Proper nutrition is the basis of productivity, safety, wages and job stability” argues Christopher Wanjek in his book Food at Work, published in 2005 by the International Labor Organization (ILO). Are companies therefore hurting their own interests by not offering their employees better options? What are the guidelines for improving this situation? Does the Spanish gastronomic culture protect us from bad practices? What strategies have been implemented and which have proved successful?

43.5 percent of the fatal accidents at work are the result of a heart attack or a stroke


To respond to this and many other questions, Fundación MAPFRE and the Spanish Nutrition and Dietetics Academy organized the seminar Food and Health in the Workplace: Current Situation and New Trends at the IMED Hospital in Valencia. In addition, this event served to set aside hackneyed views, highlight truths and arouse passionate debates. Because the workplace is full of polarized viewpoints. In the office, one may be a fan of Real Madrid or Barcelona, of American or Spanish TV series… and of fresh fruit or vending machine products.

That glass-fronted monster – filled with such tempting convenience foods, sweetened processed products and soft drinks – is the prime culprit for any expert in the field. “Diabolical” is the term employed, for example, by the nutritionist Pilar Esquer, although “the problem is never the food, but rather what we have become used to eating,” she adds. 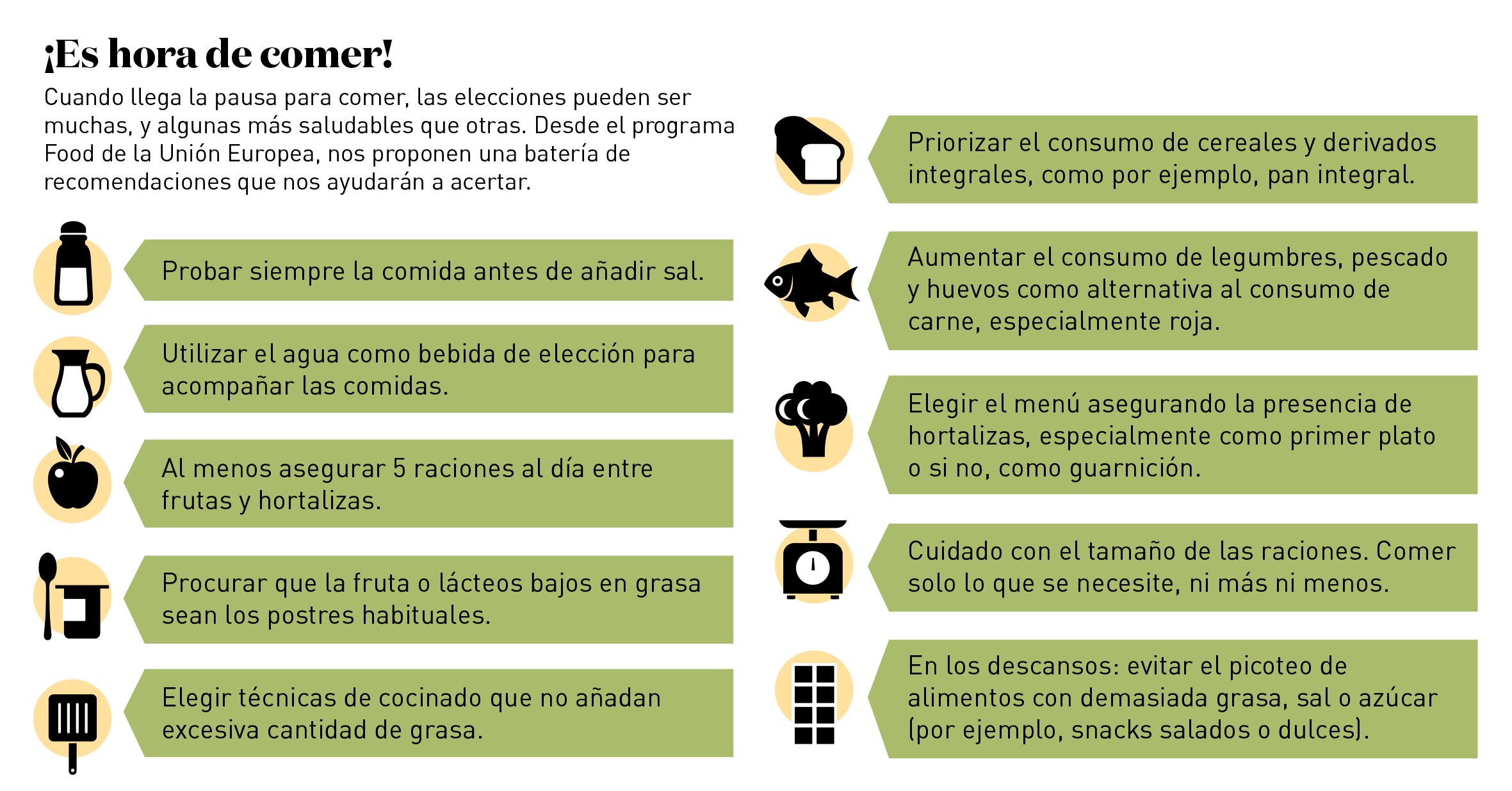 In the case of Spain, on workdays 52.9 percent of workers usually take a full meal (the European average is less than 40 percent), according to the 2016 barometer of the FOOD program, sponsored by the European Union. Moreover, one of every three employees brings a lunch box from home, while sandwiches (1.9 percent), salads (4.5 percent) and fast food (1.5 percent) are rare in this country.

However, 43.5 percent of the fatal accidents at work are the result of a heart attack or a stroke, according to the 2016 Occupational Accident Statistics report produced by the Ministry of Employment and Social Security. This is a rising trend, Antonio Guzmán, manager of Fundación MAPFRE’s Health Promotion Area, reminds us. He advocates “increasing the culture of self-protection and self-care.” Making trays of fruit available to employees, for example, “is one of the most successful actions to promote healthy eating that companies can take,” says María Luisa Capdevilla, a doctor in MAPFRE’s Prevention Service.

But will that be enough?

Antonio Cirujano, Prevention technical manager at FREMAP, stresses that turning to processed foods is increasingly common, “because it’s so convenient, requires little time and, let’s not delude ourselves, is ever cheaper.”

As for Francisco Marqués, from the National Institute for Occupational Health, Safety and Well-being, he believes that “it’s really difficult to draw conclusions from one isolated intervention… Healthy eating is fundamental, but so is time management, sleep hygiene, encouraging physical activity, combating sedentary lifestyles, and even having a toxic boss or colleague!” Marqués stands by the experiences of the nearly 400 members of the Healthy Companies Network and views the question in the medium and long term, as well as the social – rather than the individual – benefits: “Those business owners who launch intervention programs looking for a return or savings will probably be disheartened.”

For Rafael Urrialde, Health and Nutrition manager at Coca-Cola Iberia, the solution lies in individual attention: “Just as we are doing for consumers in terms of precision, individualized nutrition, we have to start taking action on a person-by-person basis in companies too. It’s not the same to be working on a factory production line as doing night shifts at a hospital or working outdoors in summer, with temperatures of 40 degrees in Madrid.” Even so, Urrialde ventures to offer two basic tips, following the advice of Dr. Grande Covián, a disciple of the Nobel laureate Severo Ochoa: “Back in the 1990s I recommended “less food and more exercise”, and also eating from small plates, as one of the problems we have today are the portions, the amount you are given in the cafeterias.”

Having reached this point, Domingo Sánchez, CEO of the firm Sportsnet, proposes actions in varying degrees, depending on the type of company, using the Internet. These include the assistance of a nutritionist, whether in-house or remote; running on-site or online workshops; cataloging the nutritional status of menus using traffic light colors; and even coordinating with the hospitality sector.

There are many other potential measures, depending on the characteristics of each company. David Martínez, from the Prevention Department at FCC Environment, explained the success of their healthy tapas contest, now in its third edition, which was born out of a healthy eating workshop for the cleaning staff at one of their facilities. Pilar Esquer speaks of “changing the concept of cafeteria for that of a “work café”, a multi-purpose area that workers can use for eating, but also for meetings, resting or brainstorming sessions.” The fact is that, as Marqués also stresses, “the surroundings are fundamental; eating in a pleasant, motivating, warm environment not only influences how we eat, but also the result of that meal.

Pilar Esquer: “If the dishes are healthy, I go for the menu”

“We are what we eat, but we have no idea of the extent to which this is true”, Pilar Esquer, an expert in nutrition, declares passionately. That is why she advocates greater awareness of our eating habits, also in relation to the sustainability of the planet. “Many experts speak about being on a fourdegree diet, for the expected increase in temperature as a consequence of these eating habits.”

In the office, do you prefer to bring a lunch box or go for the menu?

Freshly prepared food is organoleptically richer and conserves the nutrients better. So, if the dishes are healthy, I go for the menu. You talk about managing stress from the stomach.

How is that achieved?

Food is neither stressful nor relaxing, but we can indeed follow a diet that helps us maintain a balance. For example, avoiding the roller-coaster of sugar intake as we eat various foods, often without even realizing it. Poor management of blood sugar levels is often behind many conflicts.

Is a meeting at six in the evening fertile ground for aggressiveness?

It’s putting all your money on things not working out, as everyone is really tired. But, if there’s no remedy, you must at least take into account when the last meal was, what time the meeting is at, and how you can maintain those sugar levels so as to perform optimally.

You also defend the consumption of fats.

They are absolutely necessary. They cover our cells with a lipid layer. Our brain, if we drain it, is 60 percent fat! However, we need to explain which should be included in our diet and which avoided.

The Omega 3 and Omega 6 fatty acids, which are found in olive oil, nuts…

And fish! Our emotions are so closely linked to food that you can even predict the murder rate of a country on the basis of their consumption of fish. Thanks to the remains of the first hominids found in Africa, it was found that the skulls of those who lived inland had a great many more chips than their peers on the coast, and the fundamental difference was the diet. The psychiatric world is also starting to tackle many pathologies from that perspective.

We know that vending machines are a nutritional nightmare… What other bad habit would you highlight?

The habit of eating while we’re working. We are the only animal that does something else while eating. If you have a pet, try bothering it while it’s eating…