The most secret Miró

Entering the Espacio Miró provides the chance to discover a range of sixty-five works by Joan Miró, as well as five by the American artist Alexander Calder. These works make up this permanent exhibition on display at the Fundación MAPFRE headquarters in Madrid and offer a thrilling addition to our exhibitions. This opening has proved possible thanks to the generosity of the collectors who have loaned such an extraordinary legacy to Fundación MAPFRE.

Discovering this collection entails delving into the soul of the Catalan artist. An intense, profuse soul that was forged on the basis of loving and respecting the generosity of the earth, the infinitude of the heavens, human nature, and the transcendence of art. For the most part, the works correspond to the last two decades of his life, the 1960s and 1970s. A period that was a witness to dynamic, fascinating work and a time when Miró, far from lying back on his laurels given his fame, revisited some of the motifs present in his earlier career and reinterpreted them depicting new infinite spaces. Those themes which had always touched him. For Miró, nothing was as sublime as immense expanses, nothing was as exciting as the equilibrium of simple things.

Miró’s symbols are alive and ever-present in the works of the collection: stars, suns, moons, birds and female forms are strategically positioned on the canvases and speak to us of the importance of meditation in art and the idea of controlled spontaneity. Most noteworthy are the large works which draw in visitors with their thick black strokes, full of strength and courage, which highlight the pure colors of the bright figures. The fact is that Miró captivates and seduces with his sensitivity and imagination. His series on the Constellations was a landmark
event in the art world of the mid-20th century. This is visual poetry suspended above fields of color: the earth and the sky, material and spiritual, ethereal and earthly. The universe is present under the fragile idea of equilibrium. 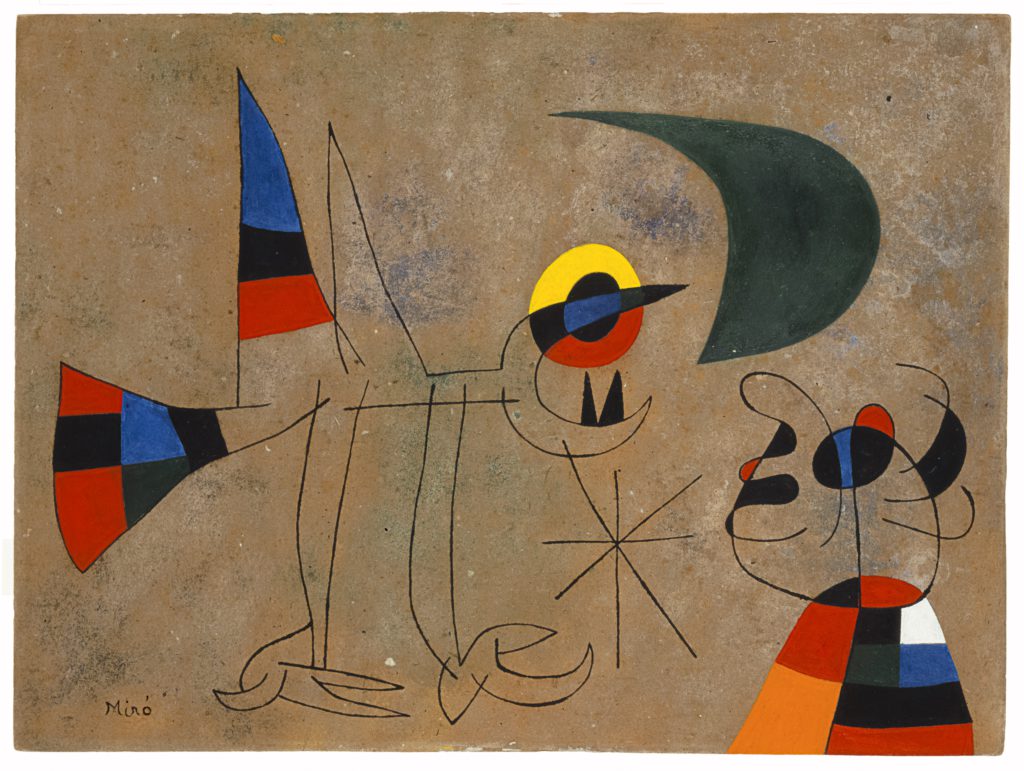 But, there is much more than painting in the Espacio Miró. We will come across Calder’s structures, which reveal the great professional and personal relationship between the two artists; with the personnages, heads of mysterious figures that astound with their incisive stares; with the challenges to painting, pictures purchased in street markets to which the artist added his personal touch of strokes and figures; and, finally, with the works produced on alternative artistic media, such as metal, cardboard or wood.

Miró the master artist firmly believed that art was the key tool for connecting with society and should therefore be at its service. In the same way, he thought about the artist’s responsibility with regard to citizens in difficult, complex times, as his works become the voice that resonates through the anodyne, compulsory silences. Due to this honest, generous mind-set, Miró did not cease to create and share. His paintings had to contain sparkle, light, emotion. They had to move people deeply, reach their soul, be reflected in their gaze and imbue the surroundings with their essence. A painting could be destroyed, but its message had to be firmly established, like the roots in the earth.

Miró’s work enlivens the senses, because every element is relevant, everything has a place in his intellect and every being has the right to be respected. Everything is prone to becoming a Miró figure. On one occasion he proclaimed I never dream when I sleep, but rather when I’m awake. This is perfectly obvious in the Espacio Miró as it invites us to use our imagination, to daydream and to hope for a more beautiful world where fantasy and a sense of awe are the constant outstanding features.

In short, entering the world of Miró entails perceiving, through the artist’s eyes, the color with which his deepest desires are tinged.