The report on the safety of motorcyclists published recently by Fundación MAPFRE underscores the need to take urgent measures to curb the accidents involving two-wheeled vehicles.

A person resident in Mexico City can lose out on 209 hours a year because of traffic jams: almost nine days. With its close to nine million inhabitants, the Mexican capital is actually the
most congested city in the world, according to the study carried out every year by the multinational company TomTom, followed by Bangkok, Istanbul, Rio de Janeiro and Moscow. There are thus two Latin American cities among the top five in the world with the worst traffic jams. It is not surprising: the large urban centers have become the engines and main driving forces behind the Latin American economies. And not only do they concentrate most of the population, but also most of the region’s economic generation. There are four megacities with more than 10 million inhabitants.

Latin America has an average rate of 38 motorcyclists killed per million inhabitants, three times that recorded in Spain, Portugal, Great Britain and the United States.

One way to spend less time in traffic jams is to move around the city by motorbike. The advantages are plainly evident: they are agile, flexible, slip through gaps and can be parked where a car cannot, and take up little more space than a bike, yet reach much higher speeds. That is why, among other reasons, the number of motorcycles on Latin American roads has increased dramatically in recent years. In Brazil, for example, the figure rose from 5.7 million in 2002 to over 21.4 million in 2013. In Argentina, it rose 329 percent between 1997 and 2009, while, in Colombia, it increased by 400 percent over the same period. In Venezuela, between 2007 and 2013, it increased by 448 percent. It is estimated that there are almost 30 million on the region’s roads. 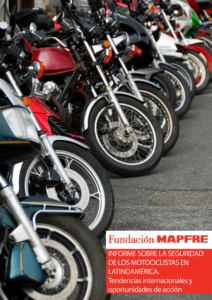 These are data collected in a recent study carried out by Fundación MAPFRE, Report on the Safety of Motorcyclists in Latin America. International Trends and Opportunities for Action. This is a revision of an earlier one published in 2013 and it analyzes the problems stemming from this phenomenon. The most important one is undoubtedly the increase in deaths and serious injuries from motorcycle accidents, with riders being much more vulnerable than car drivers. Half of all deaths that occur on roads around the world correspond to the least protected road users: motorcyclists (23 percent), pedestrians (22 percent) and cyclists (four percent), according to the latest road safety report from the World Health Organization. 61 motorcyclists die every day in traffic accidents in Latin America.

And why, despite being much more dangerous, do Latin Americans prefer motorbikes over public transportation as an alternative to the car? Basically, because of the inadequate public
service. With the growth of many cities, it has proved difficult to maintain a comfortable collective passenger transit network, with a high frequency service, low fares and competitive travel times compared to other options. On some journeys it is cheaper and faster to take a taxi than the bus.

As well as being a private mode of transport, the motorcycle has also become a mode of public transportation, providing a taxi service. A study conducted in 17 cities in Colombia states that the moto-taxi service offers time savings of 18 minutes on average in relation to a journey on foot, 15 minutes compared with the urban public transit (bus), five minutes compared with a bike or car and four minutes with a taxi (Road Safety Prevention Fund Corporation of Colombia, 2013).

What’s more, motorbikes are cheap. In more advanced economies, this vehicle is considered a luxury item, a form of leisure and a symbol of a way of life. But in countries that are still emerging, it remains a merely utilitarian mode of transport. As soon as a country reaches a certain level of development, the motorbike sets aside its role as a main means of transport and becomes a second vehicle or form of leisure. This was the case in the United States after the First World War and in Europe after the Second World War. In contrast, in some Latin American countries, motorbikes can still be purchased in supermarkets as basic necessity products.

Such intense growth in the number of two-wheeled vehicles has also surprised the authorities in most of these countries. Fundación MAPFRE’s new report on the safety of motorcyclists in Latin America has revealed significant improvements with respect to that produced in 2013, both as regards legislation and improved infrastructure or accident prevention and awareness campaigns, but much remains to be done. The figures in the study make this clear: Latin America has an average rate of 38 motorcyclists killed per million inhabitants, three times that recorded in Spain, Portugal, Great Britain and the United States. If the region had the same average rate as these countries, 17,200 lives would have been saved in 2013.

In the last five years alone, the number of motorcyclists killed in Latin America may have increased by 58 percent. According to the experts who drafted this study, the problem must be tackled on many fronts. For example, establish new laws requiring motorcycle training and certification approval of safety elements such as helmets, and run sensitization campaigns to ensure those laws are fully implemented or awareness campaigns seeking safer traffic conditions. If swift action is taken, many citizens will be saved. 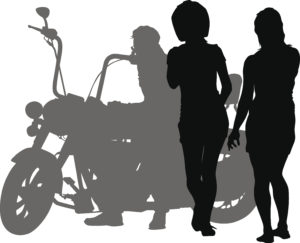 It is well known that the majority of young people adore motorbikes. And that, in general, they pay less heed to possible risks. That is why they are also more liable to suffer accidents: according to the data collected in the Fundación MAPFRE study on the safety of motorcyclists in Latin America, the largest number of deaths occur among the 20-30 age group.

The report stresses the fact that the age when youngsters start driving is one of the key factors in road safety. And even more so in the case of two-wheeled vehicles, which are more complex
to drive than other types of more stable vehicles. Experts recommend harmonizing the ages at which driving licenses can be acquired, so as to take into account the real needs and degree of maturity of the drivers.

The most effective measure in this regard is a progressive granting of driving licenses, establishing minimum ages for riding motorcycles, duly taking into account the difficulty of handling each model. That enables young people to gradually gain experience before trying to ride the most powerful models.
Casco pa’ ponerte

It has been shown that wearing a correctly fastened helmet reduces the likelihood of death by 30 percent, and severe injuries by 70 percent in the event of an accident. The Ibero-American Road Safety Observatory launched a campaign in 2015 to raise awareness among young people throughout the Latin American region of the need to wear a helmet. An attractive strategy was designed, with youthful language and Latin music, which was also launched on the Internet and social networks. It was entitled: Casco pa’ ponerte [Get your helmet on].

Fundación MAPFRE also ran a campaign in Spain to highlight the importance of helmets for protecting motorcyclists, as part of its Target Zero strategy, which aims to reduce the number of traffic accidents. The campaign included a traveling exhibition entitled Cascos con Historia [Historic Helmets], which visited several Spanish cities in the second half of 2016. Those visiting this exhibition were able to learn, for example, that the first motorcycle helmet was manufactured in 1926 by the company The Cromwell Helmet, engaged in the production of helmets for soldiers and workers. However, full-face helmets were not widely adopted by motorcyclists until, in 1967, the 15 times world champion Giacomo Agostini sported the X 3000, known as the first modern full-face helmet in history.

The exhibition likewise highlights the year 1935 as a turning point for the prevention of deaths from motorcycle accidents, following the death of Lawrence of Arabia. He died in a tragic accident when he was thrown off and hit his head. As a result of this incident, the neurosurgeon who treated him demonstrated that a helmet could have saved Lawrence’s life and he convinced the British army to impose mandatory use six years later.