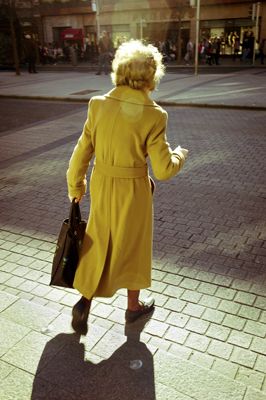 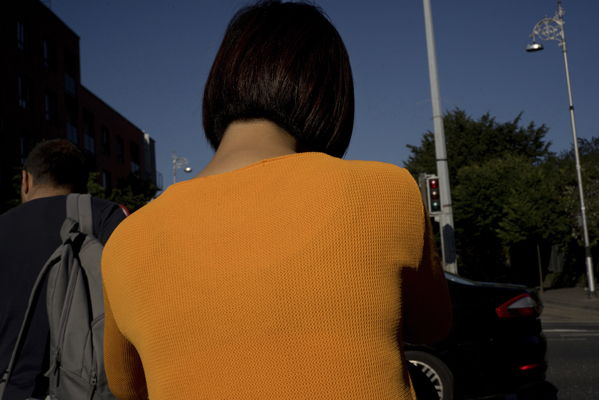 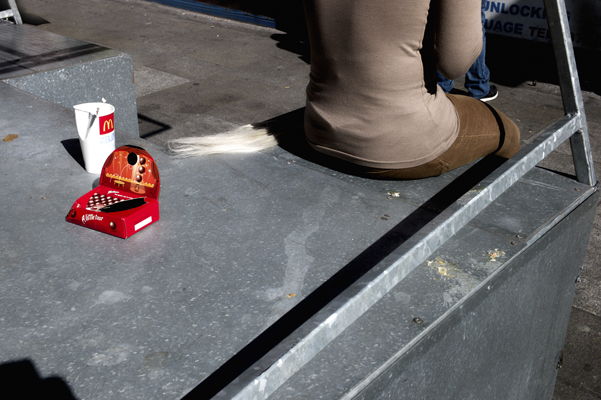 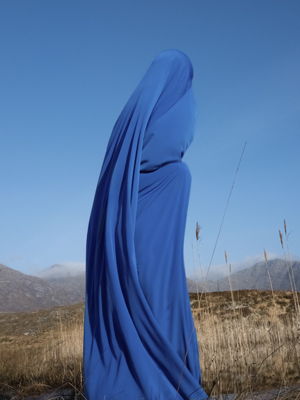 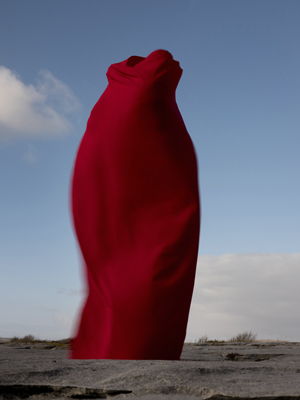 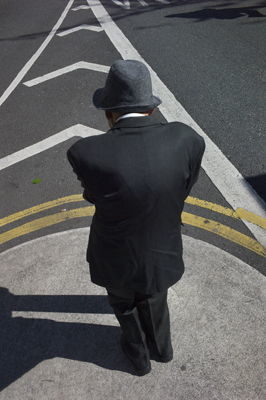 Fundación MAPFRE will be showing 150 photographs and a nine-screen video installation by Irish photographer Eamonn Doyle (Dublin 1969) in its Bárbara de Braganza exhibition hall in Madrid, from September 12 until January 26, 2020. Living in the center of the Irish capital, Doyle photographs his native city from unexpected angles, revealing an original vision of the place and its people. This is an abridged version of Wavelenths by Niall Sweeney. The full text appears in the exhibition catalogue Eamonn Doyle, edited and designed by Niall Sweeney, co-published by Fundación MAPFRE, Madrid, and Editorial RM, Barcelona and Mexico City.

Some time in late 2016, as the dust was failing in its attempts to settle on the success of the Dublin trilogy of books (i, ON, End.), and we were still reverberating from the passionate response to our exhibition of the trilogy at R encontres d’Arles1 just that summer, myself and Eamonn were sitting in his flat just off Parnell Street in Dublin talking about Krass Clement and his 1996 book Drum. How this book of photographs taken on a single evening in a village pub in County M onaghan was a kind of modernist play about the granularity of time. How this gathering of men occup y the starkly furnished pub together over the course of the night; how the sequence of unspoken positions that they take in the room is as if they have each stalled in the process of acting out the v ery same sequence of scenes that they no w appear in; how they seem to be afloat in the doldrums , waiting for the rhythm of time’s breathing to commence once again; and how all of it could have been staged in a confined set.

We were becoming increasingly aware that there was a proposition within Eamonn’s photographs of Dublin, one that was asking what we might do next. In Eamonn’s trilogy we move through a kind of floating world of Dublin. We see the city’s inhabitants manoeuvring through a series of obstacles in unknown solo performances of a collective unconscious choreography; we see the city flattening out in front of them, but also becoming them, or rising up around them like false-perspective stage settings. We twist and turn and dive in a multiplicity of dimensional viewpoints. We stand still with them.

We follow their gaze out to what lies ahead as they stride past us like giants. We inhabit the headscarves, the bags, the coats and shoes that they inhabit; the concrete they inhabit; the volumes of colour and the shapes they pull in the hard Dublin light. Though there are life-worn faces and apparent hardships, these are not portraits, nor stolen characters; there is no judgement. We are them, embraced within the entropy of scattered objects, the pulled threads, the many cuts, the rounded corners, the rubbed fabric of it all — and all of it, all of us, bound together by the same forces that keep our feet on the street, an image in our heads, and the clock ticking.

What was emerging out of the Dublin work was something asking to be “staged”, for Eamonn to deliberately place something, some one — a figure perhaps — somewhere between worlds, on the layer of film that slips between the propositions of truth and experience.

So we talked about what the truth is, and that Eamonn is not really a “street photographer”, with all the prescriptive notions that come with that title and its concepts of what defines a decisive moment. He does take photographs, on his local streets, and there is, of course, a decisive moment. But with Eamonn, the experience is more a process of “field-photography” — that field being the universal field of Michael Faraday and its electromagnetic push-and-pull that acts upon all things and that has lead to our understanding of the entirety of the universe as a kind of constant fabric of particles and fields. And that it is through movement, through the exchange of heat from one to the next, that we get our sense of time passing. So what we are seeing in Eamonn’s images are the fabric, the field, the attraction of particles, the static hiss, the heat — all of which pla y out in his images as a cumulation of the noisy relativity that comes from our day-to-day experience of it all as we walk down a Dublin street.

Eamonn had long been talking about Bob Quinn’s Atlantean. Quinn’s quartet of films and book explore the ancient cultural and trading connections between the seafaring Irish of the Connemara west coast and the people of the Iberian peninsula and Northern Africa. In the Atlantean, Quinn reveals close similarities of form in traditional Irish music and song to those that echo across the Atlantic waves to the Islamic Mediterranean — in particular the polyphonic atonal lamentation songs for the dead known as keening. He discovers that the Irish are not the Irish that they commonly like to think, but something less limiting; a DNA that is not only unzipped from elite hordes of pale-skinned north-European warriors, but one that is also significantly Arabic in origin.

These distant lines of ancestry appear to be rising up once again on the inner-city streets of Eamonn’s contemporary Dublin, with their ever-evolving populations and burgeoning communities of every nation that is not exactly Celtic. But it also echoes with his own worldknowledge of music and of the “folk music” of our generation — electronic music — which he has himself been making, producing and distributing through his studio and label, D1 Recordings, for over 25 years.

In turn, music is bound up in the fabric of Eamonn’s photographic work, quite literally as a fourth dimension of it, revealed through the ongoing collaborations with musician David Donohoe, whose compositions have become integral to the work and how it is communicated.

The cartographer and artist Tim Robinson, had published a number of books that delved into the psycho/historic geographies of the landscape of the far w est through a process of walking as a means of deep mapping, just as Eamonn would walk the streets of Dublin to photograph, following threads. Robinson’s Connemara trilogy4 of books had been weighing on Eamonn’s mind as we talked about the Atlantean — adding further layers to this emerging longing to head west; how Robinson uncoiled the geologic space-time of this region of the country, at once connecting the soil beneath to the people around and then reaching out to the cosmos, closing the circle of everything.

And so we talked about him photographing in the landscapes of the west of Ireland, perhaps setting up some kind of quiet, staged intervention, something akin to theatre, and perhaps with locals as some sort of actors . And then of course there was the land itself, Connemara, a place that weighs against the Atlantic with a ballast of history. The worry was that it would all turn out to be jus t western landscape versions of the Dublin work. There was definitely something lurking in the deep waters — but, what? In the spring of 2017, Eamonn’s mother, Kathryn, died. His brother, Ciarán, had died suddenly at age 33 in 1999 and their mum had never managed to escape the all-consuming grief triggered by this time reversal in the order of things. Throughout the 18 years from Ciarán’s death to her own, Kathryn had written many letters, addressed to her dead son, talking directly to him. Eamonn began layering images of these letters on top of each other like stratified geological maps or phonetic compositions for lament.

Later that summer Eamonn found himself on a beach in Connemara, having placed himself in the layered locations of both Quinn’s Atlantean and Robinson’s The Last Pool of Darkness. He had gone down with a friend whose family have a cottage there and whose mother knew a man who sold fish that he bought direct from local fishermen; so he thought this could be a good place to start, just to get to talk to people. Eamonn spent the morning on the beach photographing the rocks and wet sand — the sand looking like the carved fabric of mausoleum statues, the worn stones half-buried in the beach like unknown bodies slowly emerging from the dark matter of space.

He went to meet the fish-trader at Renvyle House, famous as the place where W. B. Yeats gathered with his clique to practice séances and automatic writing. He was standing in the car park outside — the light in the west sometimes comes in even harder than Dublin as it arrives unchallenged by borders across land and sea — when a woman in a long black dress ran past in front of him and into the house. It turned out that the man he was meeting was putting on a play in the house in a tiny room upstairs.

So Eamonn sat there with the sparse audience at the back of the room, and began to feel like he was slipping into a zone of surrealism he wasn’t quite prepared for. The play was about Yeats and his seven muses. The fish-trader narrated, while the woman in the black dress played each of the seven muses, changing only her coloured headscarf for each of the seven.

The next morning Eamonn drove eight hours to the Valentia Island slate quarry that hangs off the tip of one of the long peninsula fingers that test the waters of the south west. We had been working on an intricate design for his mother’s headstone, and the slate from Valentia is unique and world-renowned.

He got to the quarry late that night. High above its Atlantic-facing gaping entrance to the underworld, stands a statue — a woman and universal mother figure — in a body-length veil painted pale blue, braced against the salt-sodden air. He spent the night wandering around local graveyards, studying the variety of designs and shapes and typography of headstones.

Driving back home to Dublin the next day, across the central plains of Ireland, Eamonn kept seeing a figure, a body, entirely shrouded in a red veil, moving ahead in front of him.