The greatest input of sugar in the Western diet can be traced to manufactured and processed foods. To reduce it, there is nothing better than eating fresh, quality products.

The debate on the consumption of sugar arose in the United States at the end of the 1950s, when the rate of deaths due to cardiovascular disease was on the increase. Many experts wondered then what the causes were and, rather than sugar, saturated fats and cholesterol
were the top suspects. This undoubtedly marked the starting point for the launch of a full range of foodstuffs dubbed light or “low-calorie”. Initially, these products had reduced levels of fat, but high sugar and salt levels, all designed to make them more appetizing.

What’s the story with sugar today? Is it really a problem? Should we replace the classic teaspoon of sugar in our coffee with an artificial sweetener? First of all, statistics indicate that, in Western countries, its consumption is well above recommended levels. In Spain, the National Survey of Dietary Intake has shown, for example, that the consumption of simple sugars accounts for close to 20 percent of the total calorie count, and nearly 25 percent in Portugal and the United Kingdom, where parents have been advised to reduce sugar levels in their children’s breakfast. Apparently, before leaving the house, children in this latter country have already consumed almost half of the recommended daily dose of 24 grams. 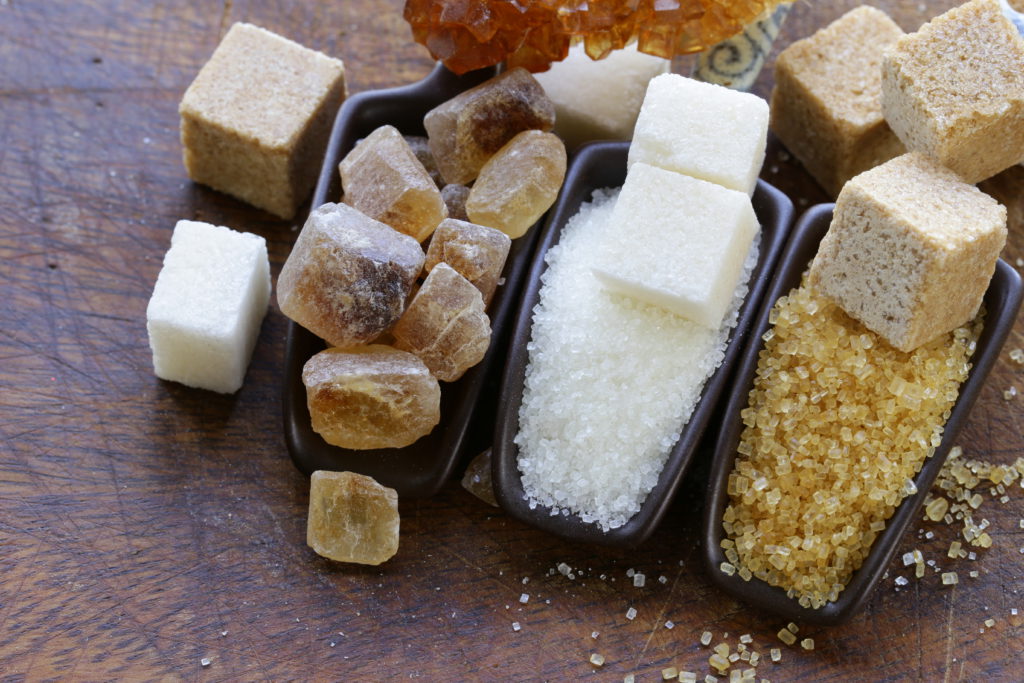 SinAzúcar.org is a photographic project which aims to graphically display the amount of sugar in food habitually found in our shopping cart, measured in a familiar unit, comprehensible to all: the sugar cube.

In the light of the bad reputation of sweeteners, given the artificial component, various more or less “natural” products have lately also gained popularity, for instance honey, stevia or even brown sugar. Nutritionally speaking, neither honey nor brown sugar provide anything new compared to refined sugar, apart from very small amounts of certain minerals and vitamins. In regard to stevia, while it is a sweetener that does not contribute calories, nor does it contribute nutritionally and, indeed, it could activate the reward mechanisms in the brain, which perpetuates that need to eat sweet things. There are even recent studies which suggest that some artificial sweeteners could induce weight gain due to alterations in the intestinal flora.

The best solution? It all depends. The greater intake of simple sugars in the Western diet, as is the case with salt or certain types of added fats, comes from manufactured or processed foods. This is what is known as hidden sugar. To reduce it, the best thing is to limit our intake of processed foods and base our diet on the consumption of fresh foods, such as seasonal vegetables and fruits, legumes, fish, meat, eggs, nuts, whole grains, and non-processed dairy products, among others. This is in line with various diets considered healthy, like the Mediterranean, Nordic or traditional diets of Okinawa or Sardinia, two of the zones on the planet with the largest number of centenarians.

If we follow this style of healthy diet, it is almost certain that we will be fulfilling the objectives of the WHO, which has demonstrated its concern with regard to sugar, especially added sugar and that which is found in processed products. This organization has recommended that less than five percent of our daily energy intake should come from sugar; in their opinion this could also bring additional health benefits. We should therefore not worry about that teaspoon of sugar in our coffee, or an occasional sweet treat.

Now, if our shopping cart does not frequent traditional market stalls, we had better take some effective action to remedy this. The quality of the food we eat is essential for maintaining an optimal state of health. The message of eating everything in moderation has failed miserably. Perhaps the idea of the writer and healthy eating activist Michael Pollan of eating “authentic food”, in not too great a quantity and mostly vegetables, rather than animal products, is a good start.

The recommendations of the WHO make no reference to the sugars contained in fruits, vegetables and other whole foods and fresh produce. They do however refer to added sugars, and the so-called naturally occurring free sugars, as is the case of juices. For an adult with a diet of some 1,800 calories, sugar consumption should be reduced to less than 22.5 grams a day, which corresponds to a little less than three packets of sugar.

The increase in the consumption of sugars has been related to the prevalence of obesity and other metabolic problems, especially diabetes. A whole orange, compared to its juice, contains all the flesh of the fruit, with a large amount of fiber which, combined with chewing, makes it more filling. The whole orange contains more vitamins and minerals than in juice (even homemade) form. Contrary to what one might think, the brain does not need sugar to function, but rather it obtains energy mainly from glucose, which can be obtained from various sources.