Why, how and where accidents occur

Are you more likely to die in a fire or choking on food? Why are there fewer accidents in Madrid than in Catalonia? The Atlas de la accidentalidad en España published by Fundación MAPFRE clearly spells out the hazards we constantly face in our daily lives.

Mark Twain was not just the wonderful author of titles such as The Adventures of Huckleberry Finn or A Connecticut Yankee in King Arthur’s Court. He also really loved science and fostered this interest through his friendship with one of the most important researchers of his time, the great Nicola Tesla. Their hours together in the Serbian scientist’s laboratory led to one of his most famous quotes: “Name the greatest of all inventors. Accidents.” X-rays or Velcro are examples of discoveries that can be put down to a happy coincidence. But what in the laboratory of a genius is a Eureka moment, in daily life is an incident that can end up causing injury and, in more tragic cases, even death.

An accident is not when we burn our toast at breakfast (that’s because we’re still half asleep) or when, if it falls on the floor, it always lands buttered side down (that is Murphy’s Law). Between 10,000 and 11,000 people die each year in Spain due to unintentional injuries – in other words, accidents. That is nearly 30 deaths a day, more than one every hour, many of them involving youngsters. The outlook is even bleaker when we look at the figures of those hospitalized due to injury, a mishap one out of every 150 of us will experience.

In the United States, 550 children under the age of ten drown in swimming pools each year, and 175 die in firearm accidents

These are figures from the Atlas de la accidentalidad en España. Accidentes, mortalidad y lesiones, produced by Fundación MAPFRE following a thorough analysis of the INE (Spanish National Statistics Institute) database for the period 2011- 2015. Despite how striking some of the percentages are, this report reveals that Spain is in a relatively better position than other European countries. It also seeks to highlight the most relevant combinations as regards sex, age and place of residence on which to focus prevention policies.

“A few days ago, an American colleague who was visiting Madrid remarked that he felt much safer walking around Madrid than in many other cities in other countries. And, frankly, he was right”, Jesús Monclús, Accident Prevention and Road Safety manager at Fundación MAPFRE added to round off this anecdote. “Objectively speaking, Spain is very safe, both from a public safety viewpoint (robbery, assault, etc.) and in relation to incidents that produce unintentional injuries,” which is the question we are dealing with here. 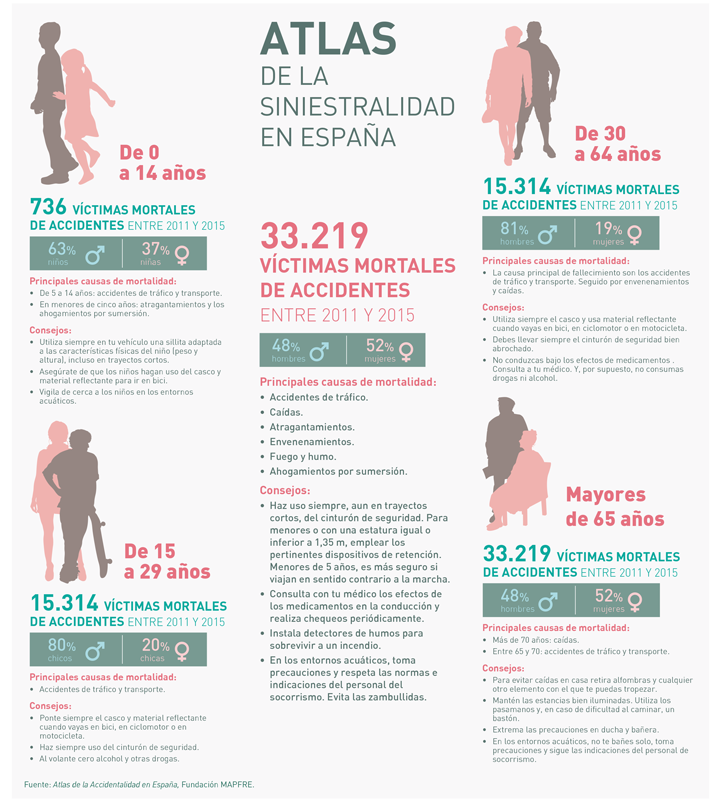 The accident as a spectacle

Because life is not the sum of its eccentricities, but rather the lowest common denominator of its misfortunes. So, in Spain, what accidents result in the most deaths? This is the (unordered) list of the causes. But what would the correct ranking be?

• Traffic and transport accidents.
• Poisonings, particularly those caused by an overdose of stimulants, drugs or medications.
• Falls.
• Drowning and obstruction of the airways (choking).
• Fires.

Before discovering the correct order of these causes of accidental death, we must first talk about how to avoid them. “Accidents do not occur due to bad luck or fate, but rather are the result of unsafe conditions and conduct,” such as failure to comply with safety standards, mistakes and oversights, which can be corrected, Monclús contends. It must be assumed that hazards will always be present. But adequate prevention measures can help us get closer to that goal of zero serious injuries or deaths. “More State policies, more nationwide Cover of the Atlas de la Accidentalidad en España accords, larger budgets in line with the magnitude of the problem […] and, above all, more mass accident prevention campaigns based on the costeffectiveness of interventions. These are just some of our proposals at this point,” the report states. And yet, why does this debate not seem to be on the social agenda?

30 DEATHS ARE RECORDED EVERY DAY IN SPAIN, ALMOST ONE EVERY HOUR AND MANY OF THEM
INVOLVE YOUNGSTERS.

The answer, as is increasingly the case, lies in Big Data. In one year in the United States there is an infant death by drowning for every 11,000 private swimming pools. If there are six million pools in the country, “this means that approximately 550 children under the age of ten drown each year.” At the same time, for every million or so firearms, a child dies as a r esult of a gunshot. It is estimated that there are 200 million guns in the USA and, therefore, around 175 children under the age of ten die annually from this cause. Looking at these figures, we can see that the probability of dying in a pool (one in 11,000) compared to dying from a gunshot (one in over a million) is not in the same league. And yet, we are all longing to have our own pool so our children can splash about and, at leas t in many countries, we would never think of keeping a gun at home. The reference may be too Far West, but it exemplifies to perfection a great truth: that the dangers that scare us and the dangers that actually kill us can be very different. And this affects our motivation to do something about it.

Let’s return to our ranking to see if there are any surprises: the leading cause of accidental death are falls, with 12,723 deaths in the last five years for which data are available (24.3 percent of the total), suffered primarily by the over-65s. This figure rose from 20 to 25 percent between 2011 and 2015. Surprised? Well, there’s even more… This was followed by drowning and choking, with 11,707 deaths (22.3 percent), a figure that has been steadily growing. For each drowning, by the way, there are four choking incidents: this is why Fundación MAPFRE has both a drowning prevention campaign and the SOS Respira initiative, which combats choking risks. Also noteworthy are the transport and traffic accidents, with 10,806 deaths (20.6 percent). Poisonings kill 4,221 people (eight percent), principally due to overdoses among those aged 25-50. Finally, there are fires, which accounted for 826 deaths (1.6 percent) over the five years studied. On reading these figures, we come to the conclusion that being over 65 years old is a hazardous sport.

However, wherever you live, it must be borne in mind that small gestures can achieve great results. Thus, to combat falls, Fundación MAPFRE recommends the use of handrails and, in the case of difficulty walking, a cane. In aquatic environments, take precautions and follow the indications of the lifeguards. Take care when using a pedestrian crosswalk. Make sure that children wear a helmet and reflective materials when riding a bike. Always wear a safety belt and consult your doctor about the effects of medicines on driving… These are just a few recommendations to highlight those everyday hazards that can take us to the grave.