Nearly half of our youngsters admit they are hooked to the Internet and social networks. This is revealed by the latest study conducted by Fundación MAPFRE and the Reina Sofia Adolescence & Youth Center of the Drug Addiction Foundation (FAD) with the aim of analyzing their behavior regarding how they make use of the Internet and showing them the risks to which they are exposed. For the experts, the goal is not just to teach them to avoid excessive use of smartphones and consoles. The main challenge now is for them to learn how to differentiate between truthful information and hoaxes, and how to be careful with the personal data they share.

“You are often misled on social networks. Bullying among peers and distributing private photos is more common than people think,” declares Gonzalo Izquierdo, a second-year High School student. Like most of his colleagues and friends, this youngster from Madrid is aware of the risks, but he accepts the drawbacks as the price to be paid for enjoying the opportunities offered by the Internet. “I surf the Web for fun, looking at other people’s profiles and sharing information. It’s what I like doing most in my free time.”

Saturation, dependency, deceit and abuse. These are just some of the feelings of young Spaniards aged 14 to 24 after using the Internet and connecting to social networks. Over half (55.4 percent) admit they are constantly checking their smartphone, even in class or when working (29.3 percent), and even when they are with others (19.7 percent). The amount of time they spend on social media also leads to them neglecting other activities such as studying (49.9 percent), reading (49 percent), sports (31.4 percent), and even losing hours of sleep to stay connected to the networks (43.2 percent). 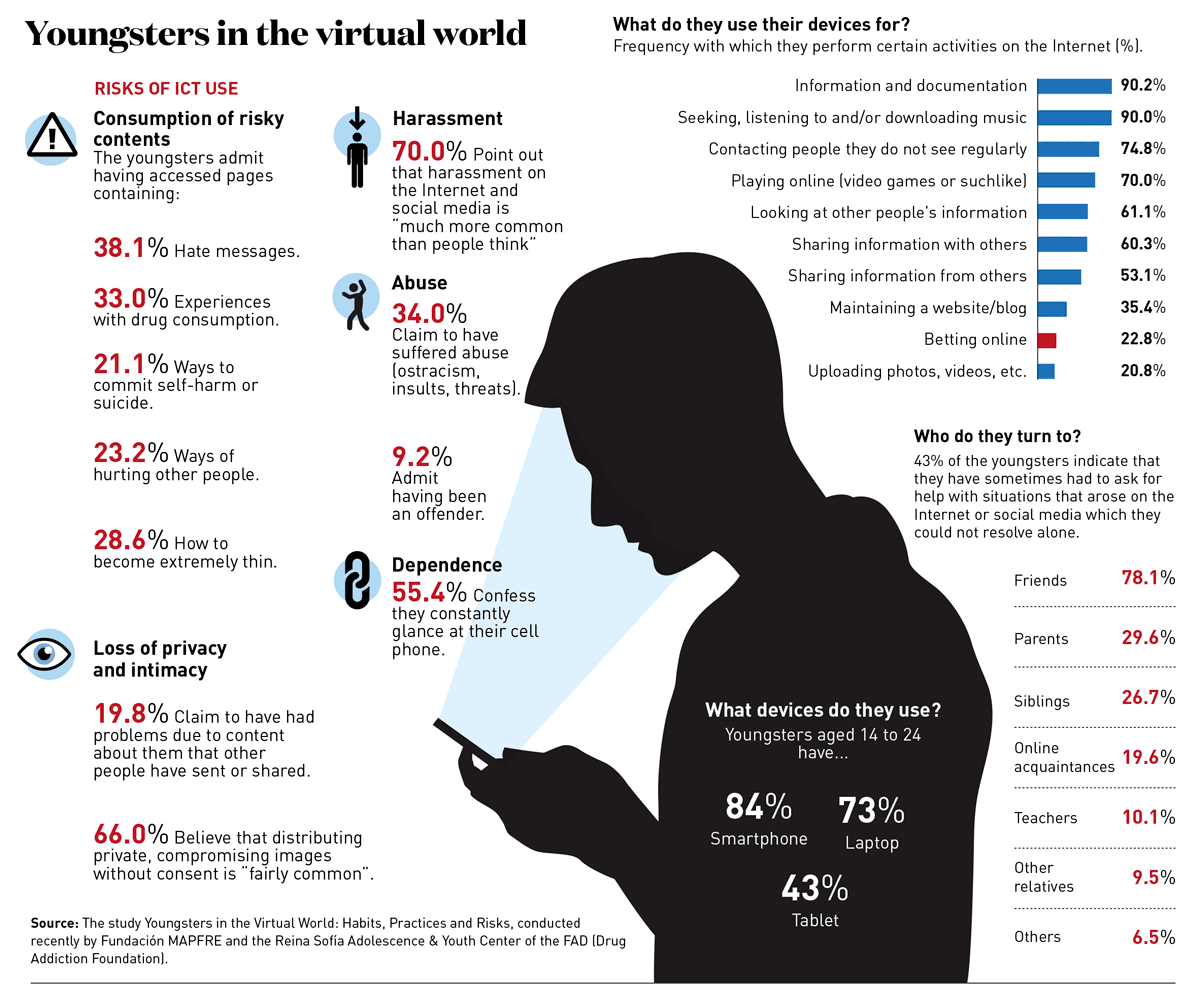 These are data from the study Youngsters in the Virtual World: Habits, Practices and Risks, conducted recently by Fundación MAPFRE and the Reina Sofía Adolescence & Youth Center of the FAD (Drug Addiction Foundation). According to this research, nearly half of these young people (49 percent) admit they very often feel “addicted” and, according to the experts, this leads them to feel the pressing need to constantly “check their cell phone to see if something new has happened”, a feeling of anxiety that stems from the fear of not finding out quickly about something circulating online. They are also well aware that the Internet and social media pose a risk of being misled and sacrificing privacy. 54 percent declare that “you are often misled on social networks”, while 51.9 percent believe that “using social media makes it inevitable that strangers know things about you.”

Laura Sánchez is a clinical psychologist. For five years she has been working with children and teenagers in elementary and high schools over a large part of Spain, outlining the risks posed by cyberbullying, online harassment – “the most prevalent online hazard” – and others such as “happy slapping”. This expression is used to define a type of harassment which results in explicit violence and, moreover, is recorded on video and shared on social media, “a horrible practice which makes fun of victims by posting videos showing them being beaten and humiliated by others.” In her workshops, she also talks about other common risks such as grooming, where the goal is to obtain images of minors in pornographic situations and even attempt to arrange a physical meeting with a minor.

Young people aged 14-24 view the Internet and social networks as “where you have to be.” They principally connect via their own smartphones (84.1 percent)

“The data are most worrying”, she states. “Nearly seven out of every ten young people believe that both the harassment of kids by adults (grooming) and among their peers (cyberbullying) is fairly or very common, much more than people think.” Likewise distributing private, compromising images without consent, as well as threats, insults, sick jokes and acts of ostracism, which 34 percent of youngsters acknowledge they have already suffered.

“We are facing a major challenge, since most kids believe that their online activity affords them so many benefits, such as making new friends, interacting more with people who are far away or with their friends, or simply having fun.” In this regard, her work consists in getting them to comprehend that the use of new technologies, social media and the Internet can be positive if they act responsibly. “One of the messages we stress the most is that they must be careful with any information of a personal nature they share. Youngsters open up a great deal online, put up few barriers and accept that people they don’t know at all can come into their lives. They let themselves be carried away by the ‘follow for follow’ strategy to gain followers at any cost, which certainly entails risk.” We also warn younger children of the hazards posed by playing online video games, “given that, while they barely realize it, they are connecting with total strangers.”

For over five years now, Fundación MAPFRE has been running its ControlaTIC educational program, in which more than 100,000 teenagers from 500 educational centers all over Spain have participated to date. 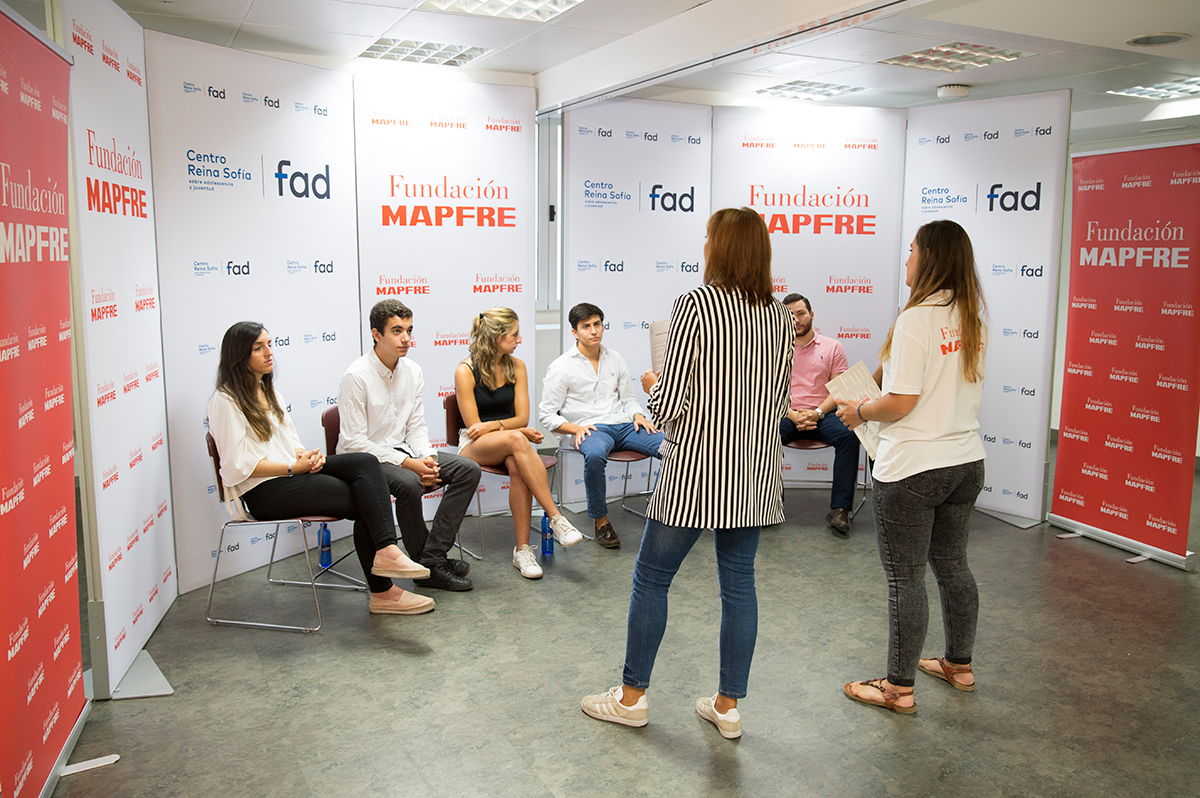 The experts also warn that kids must be educated in the new forms of communication, especially by fostering key skills such as critical thinking, based on teaching them to differentiate between truthful information and hoaxes, not to trust anyone, to question the motivations of those they encounter online and to be cautious about sharing any personal information. It is also important that they understand the value of intimacy and privacy, helping them to question their excessive online exposure and letting them see that what they upload to the Net can have consequences in the medium and long term. Promoting the participation of adults – both parents and educators – is yet another key aspect, especially so they can comprehend how young people interact in the digital environment and thus be able to help them tackle hazardous situations online.

“We must bear in mind that the vast majority (78.1 percent) turn to their friends when they have difficulty solving some online issue. A mere three of every ten rely on their parents and nearly ten percent on their teachers,” states Antonio Guzmán, Health Promotion manager at Fundación MAPFRE. “Until children reach the age of 14, we suggest setting specific usage rules with the greatest possible degree of consensus, such as establishing common areas of the home and limiting the amount of time (no more than two hours a day) for using new technologies. We also believe it’s important to monitor such use and avoid them using a computer or smartphone just to fill in time, before they have fulfilled their responsibilities.”