Four and a half hours in which to act

A stroke is a disease, increasingly common among adults and young people, which almost all of us have heard about. However, few of us would know how to recognize its symptoms at first. Julio Agredano, who suffered one six years ago, has made spreading the word his way of life.

“In 2011, at the age of 39, I had a stroke.” This is how Julio Agredano introduces himself. He is the founder and president of ‘Freno al Ictus’ [Stop Strokes], an association (in the process of becoming a foundation) to which he devotes much of his time with tremendous passion.The reason lies in his personal experience. “It was the last day of our vacations in Asturias, before returning to Madrid. And I couldn’t identify the symptoms (loss of strength on one side of my body, dizziness, a fierce headache, loss of balance) – I just thought I was tired. So I went to bed. I convinced myself that ‘tomorrow will be another day’. And indeed, the next day was another day… worse.” By daybreak he had suffered a second stroke, even more severe than the previous one. This time the symptoms left no room for doubt: Julio could not move or speak, and one side of his face had drooped… It must be borne in mind that the reaction time for dealing with a stroke is short, just four and a half hours from the initial onset of the symptoms. “When I arrived at the hospital, the most effective medication for breaking down the clot (via systemic thrombolysis) could no longer be used. The next, more invasive, step is a mechanical thrombectomy.” It consists of inserting a catheter via an artery in the groin, seeking out the clot and removing it. For this procedure, up to six and a half hours are needed… This is a very short time window. “It was already too late for all that.” The sequelae would have been much less severe had he gone to the hospital the night before. 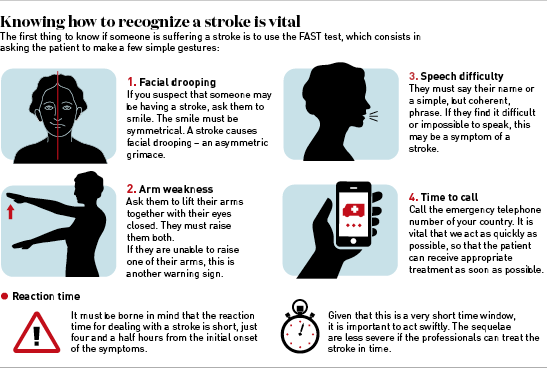 The reason why Julio did not go to a health center is the same as that applicable to the vast majority of stroke patients: misinformation. Antonio Guzmán Córdoba, manager of Fundación MAPFRE’s Health Promotion Area, explains: “Despite the fact that most people have heard of a stroke, and many of us even know someone who has had one, there is a lot of misleading information surrounding this condition. Few people know what symptoms should alert us that someone is suffering a stroke.” In fact, the most common practice is for the patient to go to bed and wait for the symptoms to pass. So said Jaime Masjuan Vallejo, head of the Neurology Department at the Ramón y Cajal University Hospital, at the stroke seminar organized by Fundación MAPFRE, COFARES and the DCH (International Organization for Human Capital Managers). A tremendous error.

If misinformation is the main problem regarding a stroke, the first thing we should know is exactly what it is. The Spanish Stroke Federation defines it as a cerebrovascular disease caused by the reduction or blockage of the blood flow to, and within, the brain. Blood is prevented from reaching the brain in the required amount and, as a result, the nerve cells do not receive oxygen and cease functioning. It needs to be taken seriously because, according to the Spanish Society of Neurology, strokes are the second leading cause of death, number one among women; and they affect some 130,000 people every year. Currently, over 300,000 Spaniards have some functional limitation after having suffered a stroke. One in six people will have one in their lifetime…

Julio was lucky, “despite doing everything wrong,” as he himself admits. To begin with, because 80 percent of strokes are due to modifiable causes upon which we can take action. In other words, they are preventable with a healthy lifestyle, a wholesome diet, and doing some exercise. But Julio weighed 103 kilograms, led a sedentary life (“I hadn’t done any exercise in the past 10 years”), always ate out, dined on whatever was at hand in the evening, slept very little, worked a lot… “I was a sales executive in an IT company and spent at least three days a week away from home. I had a lot of work-related stress.” All this probably played its part in his suffering a stroke, despite his age. We should note that, according to recent studies, there has been a 30-40 percent increase in stroke cases among the under-55s. We should stop associating strokes with the elderly…

So when he came out of hospital, things were not easy at all. “It was a highly complicated year of recovery, with constant dizziness, problems in one leg that made me limp, a continuous feeling of being drunk, speech and coordination problems… Just imagine: you go out drinking one night and the next day you have a tremendous hangover. That hangover was my daily life.” He did not give up. He knew that the only way to deal with it was with a lot of rehabilitation. And he put everything into it: “Four hours a day for a whole year. And as the Social Security doesn’t have the resources to cover rehabilitation, I paid for it myself, at 45 euros an hour. I was in a position to invest my savings in my recovery, and that’s what I did. Because not all private insurance policies cover the treatment of strokes. In this sense, it is important that companies taking out health insurance for their employees should ensure full coverage is included for strokes, as it is an increasingly frequent pathology.” 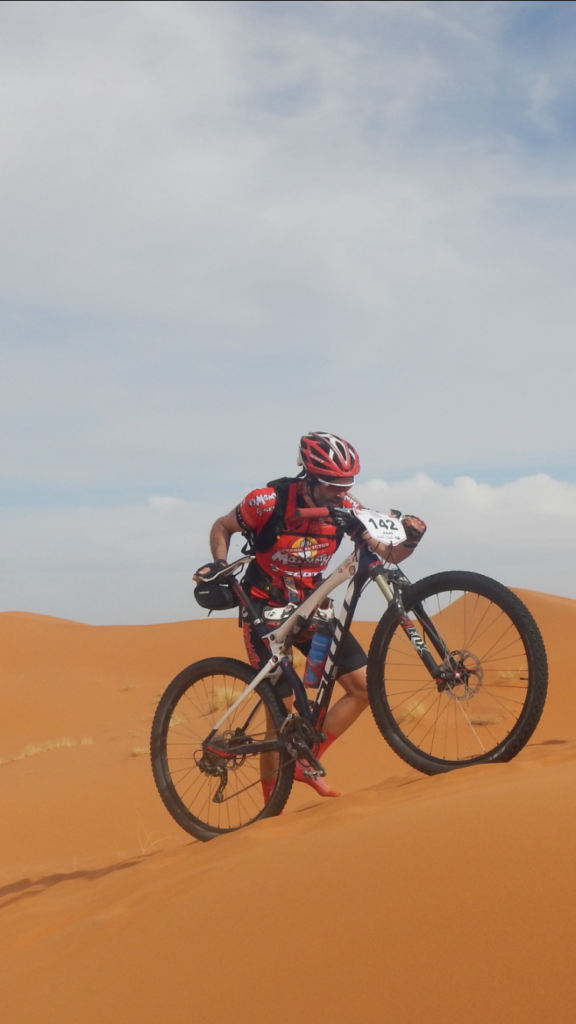 Julio Agredano in the Titan Desert

Julio Agredano has no doubt that his current state of good health is directly related to the rehabilitation he did. But also to his great resilience and his personal attitude. “I thrive on challenges, on goals. And in 2012 I set myself a difficult one. I saw a program on the Titan Desert, an endurance cycling event over six days, covering a total of 650 kilometers across the desert. It had been years since I last got on my bike, but I told my wife: ‘I’m going in 2015.’ She burst out laughing.” Little by little he improved on his bike, overcoming the sequelae of the stroke. So much so, that he has been in that race – and many more – in 2015, 2016 and 2017. And, along the way, he has talked celebrities into joining him, thus ensuring that many people have heard of Freno al Ictus. “The first year I took the bullfighter Oscar Higares with me; the second time, it was the actor Dani Rovira and, on the most recent edition, the basketball player Iñaqui de Miguel came with me.”

And he does this because his priorities changed drastically as a result of the disease. Although he went back to work, he left shortly afterwards. He wanted to start a new life with this new opportunity he had been given: “This is what gets me going every morning. This is what I want: to take my son to school and pick him up again whenever I can, do sports, let the public know what a stroke is, what the symptoms are and how to act, and what has to be done so that the health insurance companies cover it fully and the pharmaceutical companies engage more.” Now, that is his path.

Antonio Guzmán Córdoba: “Companies are a powerful communication channel to the public and can play an important role in disseminating among their employees the symptoms that are warning signs, and what to do when faced with them.” Those in Freno al Ictus are of the same view. That is why one of its lines of action consists in visiting large companies to give talks about strokes. The results are always positive. Indeed, Julio Agredano is clearly moved as he recalls how, just a few weeks ago, he received an email from someone who had attended one of these talks. “It started off saying ‘Hi, good morning! And that is thanks to you. My father had a stroke a few days ago and I was able to handle the situation, as I knew what the symptoms were. He is now back home and in perfect condition.’ Things like that make all the effort worthwhile.”