The figures speak for themselves: while 115 million children in the world suffer from malnutrition, obesity affects 43 million and, of these, some 30-40 percent live in developed countries. The trend, therefore, is not encouraging. Changing the habits of adults is really difficult and this is why childhood is such a key stage for establishing healthy eating habits that will endure throughout life.

The World Health Organization puts it bluntly: childhood obesity is one of the major health challenges in the 21st century. No question. This is how this organization explains the issue, adding that this problem affects high and low-income countries alike, in the latter case compounded by the scourges of poverty and malnutrition. Childhood obesity figures are increasing at an alarming rate and, in 2016, it was estimated that the number of overweight children under the age of five exceeded 41 million. Almost half of them are in Asia and a quarter in Africa.

This is truly concerning, as it is known that obese children are more likely to become obese adults and then also suffer a greater risk of other non-communicable diseases such as cardiovascular disease or diabetes. The WHO therefore urges all nations to grant the highest priority to the fight against childhood obesity.

Setting an example at home

Imitation is one of the prime mechanisms in a child’s learning process. We know that the environment has a major bearing on behavior and the acquisition of habits among the little ones. What they see at school or at home will decisively determine their future habits. So much so that we know that those born to obese parents are more likely to become obese children and adults: not just due to the way they eat, but also due to that acquisition of unhealthy habits which will last into adult life. Compounding a poor diet is physical inactivity, smoking or alcohol consumption, which are components that often go hand in hand in one big deadly cocktail.

The paradox of today’s society Is that, while there is hunger In the world, 41 million children under the age of five around the world are overweight according to data from 2016

We also know that those people with better cooking skills and abilities tend to have a healthier diet. As indicated in the report Diet, Society and Food Decisions in 21st Century Spain, drafted by Fundación MAPFRE in collaboration with the CEU San Pablo University, women account for the vast majority of the work in the kitchen in Spanish homes, especially those in the higher age groups. There is less difference between the sexes among youngsters, with respect to their claimed culinary skills. Moreover, it would appear that they do not lose interest in cooking, contrary to what we might think. This may be partly due to the popularity of television programs that bring haut cuisine into every home, making chefs hugely popular figures and raising yet further the profile of their culinary art. Youngsters nowadays not only want to be successful footballers, but also creative cooks. 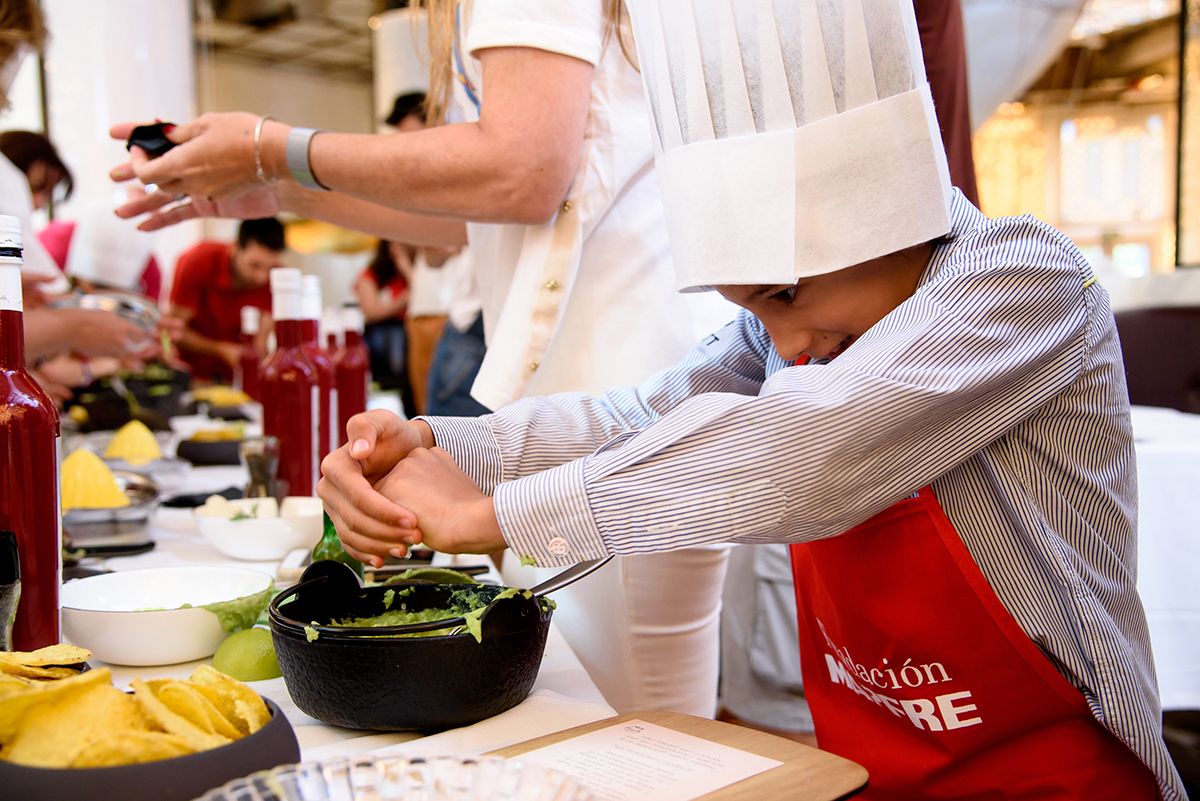 Teaching cooking skills can therefore provide an excellent vehicle for introducing the little ones to healthy eating habits. Those striving to improve the eating habits of children – such as the Alicia Foundation, created by, among others, Ferrán Adriá, or the Dani Garcia Foundation – have a clear idea about this: one of the prime motivations in food consumption is personal taste, something that is also reflected in the Fundación MAPFRE study mentioned above. If we want the little ones to eat vegetables, we must make them appealing. Or better still, get them to prepare them. Making kids participate in the whole process – right from the purchase, through to the conservation, prior preparation, cooking and presentation of the dishes at home – can break down some of the barriers that prevent them from trying new foods. Affording them some initiative, and heeding their opinion to adapt dishes to suit their personal tastes, can be a good way of boosting their acceptance. Without forgetting the visual aspect: the notion that a dish must be visually attractive may be even more important for children. The presentation can make all the difference.

Practicooking: from theory
to practice

With the aim of helping families once again make the kitchen a space for sharing leisure time and health, Fundación MAPFRE and the Dani Garcia Foundation launched the project entitled Practicooking. Eating vegetables can be fun if we all participate, turning mealtimes into a game. This project offers simple, quick, tasty recipes anyone can try out.

Presented by the chef Dani García, the videos walk us through the preparation of these delicious dishes. Moreover, details are given for each recipe regarding its difficulty level, most suitable agegroup, ingredients, allergens and each step of the preparation.

Let’s bring the little ones into the kitchen. Under our supervision, we can see to it that today’s little chefs become healthy adults who, in turn, will pass these good habits on to their own children. This may be one of the few ways in which we can put an end to the scourge of obesity.

We know that those born to obese parents are more likely to become obese children and adults: not just due to the way they eat, but also due to that acquisition of unhealthy habits which will last into adult life

Mealtimes self-regulated by the baby, supplementary feeding on demand or, to use the widely-used term, Baby-Led Weaning, is a growing trend popularized via social media. This term was coined by nurse and midwife Gill Rapley, who summarizes the fundamental notions of her method in the book Helping Your Baby To Love Good Food. The idea is that, from the age of six months, coinciding with the start of complementary feeding, babies can be offered suitablysized portions of cooked food, so that they can become familiar with different food types: touching, smelling, seeing and tasting them.

This method enables young ones to progressively become familiar with the textures, smells, flavors and colors of food, and even the sounds as they bite or chew. This allows them to gain confidence and feel able to regulate what they eat, depending on their adaptation to each of the foods. In addition, it enables them to recognize whole foods, which is not the case when we give them baby formula or purees. They thus become familiar with what their diet will be like at a later stage, once they are no longer being breastfed. Furthermore, this method also seems to help their motor development, given that the need to handle these foods, sometimes slippery or irregular, stimulates and hones their motor skills.

One of the main risks people attribute to this method is the risk of choking. It is therefore most important that food portions are of a size that avoids the risk of airway obstruction. For example, it is preferable to offer relatively large pieces that babies cannot directly ingest without biting or breaking up with their hands, and never let them feed themselves unsupervised. We should also be prepared to act in the event of some incident, knowing how to administer the Heimlich maneuver on infants under one year old. However, a recent study found that there is no increased risk of choking when following this method, compared to spoon-feeding mashed pap.