Chronicle of a novel-worthy disaster

The fire at Grandes Almacenes El Siglo in 1932

One of the most remarkable pieces held in the Insurance Museum is the dossier on the great fire at Grandes Almacenes El Siglo in Barcelona. This huge department store, whose origin dates back to 1881, was located between Rambla de los Estudios, Calle Xucla and Plaza del Buen Suceso, and had a total usable area of 25,083 m2 . It is clearly a point of reference as regards the introduction of large-scale commercial premises in Spain, with over 60 specialist sections, which, from 1910, included a café-bar and a grocery store.

The violent blaze broke out on Christmas Day 1932, at 11 o’clock in the morning. It was due to a short circuit, probably caused by a malfunction on a toy train that was set up in a shop window display. Within two hours of starting, the fire had devoured a large part of the central buildings of the complex, as well as those on Xuclá and Buen Suceso streets. The merchandise and the industrial equipment could be considered a total write-off. The appraisers were able to evaluate the damages, fundamentally thanks to the recovery of some of the accounting records held at El Siglo.

Fortunately, the department store was coinsured by 22 companies, as detailed in the report produced in order to assess the damage caused by the fire. This was drafted by Narciso Masoliver Ibarra, industrial engineer, and E. Pedro Cendoya, architect, the loss adjusters designated by the insurance companies and the department store, respectively.

This 249-page report, with 22 floor plans and 41 photographs, was produced in just five months, thus enabling the rapid resolution of this case that the insurance companies wanted.  The damages caused by the fire were estimated at 11,201,334 pesetas (currently equivalent to some 23 million euros or 3,825 million of the old pesetas). 33 percent of this amount corresponded to the insured buildings, and 67 percent to the insured industrial furnishings and merchandise. The indemnity was assumed by the 22 insurance companies and the rapid payment of the settlement enabled the department store to reopen in 1934.

Within two hours of starting, the fire had devoured a large part of the central buildings

The La Vanguardia newspaper dedicated a full page to the story on December 27, 1932, which is reproduced above. This indicates the impact this incident made at the time and how it affected Catalan society as a whole:

[…] Grandes Almacenes El Siglo, S.A., has been destroyed by a tremendous blaze. That popular store, right on the Ramblas, was a clear exponent of the full potential of Catalan commerce. But, on Sunday, it was engulfed in flames and, in little more than two hours, the fire destroyed everything that had been achieved thanks to enormous endeavor and resolute entrepreneurial spirit over the years. The city has experienced hours of sincere, legitimate grief […]  […] The voracious blaze spread inexorably and no area was spared. Thus, when the fire service arrived, despite their tenacious, heroic efforts to locate the flames and prevent them from spreading, the three buildings housing the department store were totally gutted, no more than a huge pyre. In its destructive fury the fire had not only left a powerful company at a critical juncture, but it had wiped out a business thanks to which over a thousand humble families earned their daily bread […] 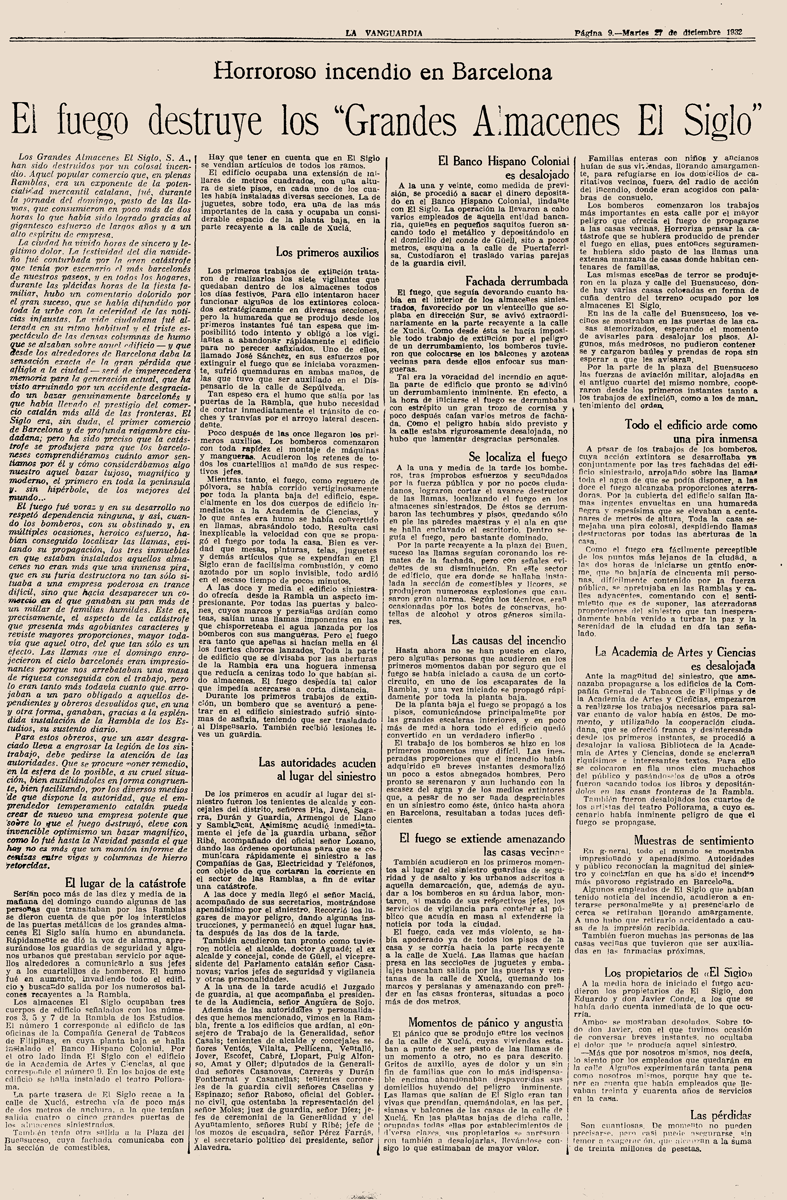 This event has inspired several novelists, such as Care Santos, winner of the 2017 Nadal literary prize, who wrote the novel — and subsequent TV series — Habitaciones Cerradas [Closed Rooms]. We had the pleasure of meeting this writer at the Insurance Museum when she was gathering information for her work. In addition, on the blog she published about her novel, Care Santos included interesting tales about this store, such as the existence of young female workers known as sigleras:

The writer Sempronio, chronicler of the city of Barcelona, described how a multitude gathered every day at closing time just to see these women leave the premises. Not only were they known for their beauty and education, but they wore a uniform and were selected from among the Barcelona middle class, which was synonymous with excellence. For good reason is it said that, among the employees of this establishment, there were even celebrities, such as the wife of the future president Josep Tarradellas, Antònia Macià.

He also highlights the fact that the El Siglo department store was a pioneer in many services which seem so normal to us today:

[…] from mail-order sales to the existence of a cafeteria in the interior of the building. In El Siglo ladies could choose the fabrics for their dresses and place their order directly in the dressmaking workshop, right in the same building. It was also possible to have your picture taken, write a letter, visit a painting exhibition, acquire mourning dress or purchase fine glassware.

Located in Madrid, at Paseo de Recoletos 23, it has 600 pieces on display and a total of 1,300 preserved in the institution’s collection. In addition, all of them can be viewed on a virtual tour of the museum at www.museovirtualdelseguro.com.