From Chagall to Malevich: Art in Revolution 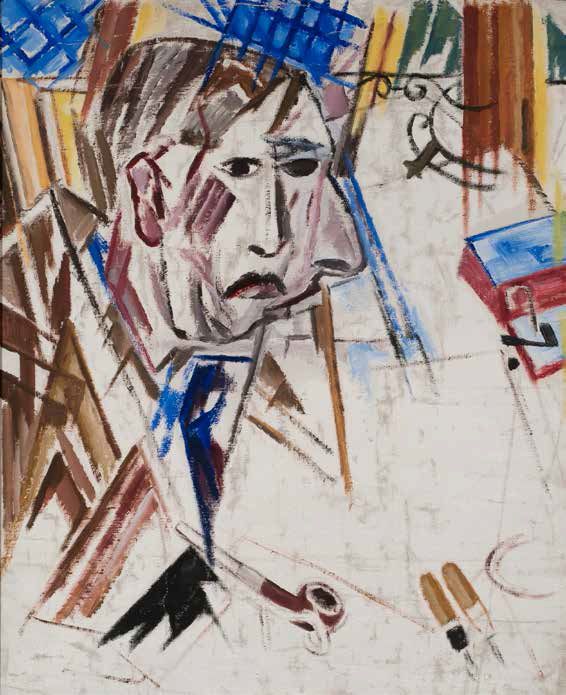 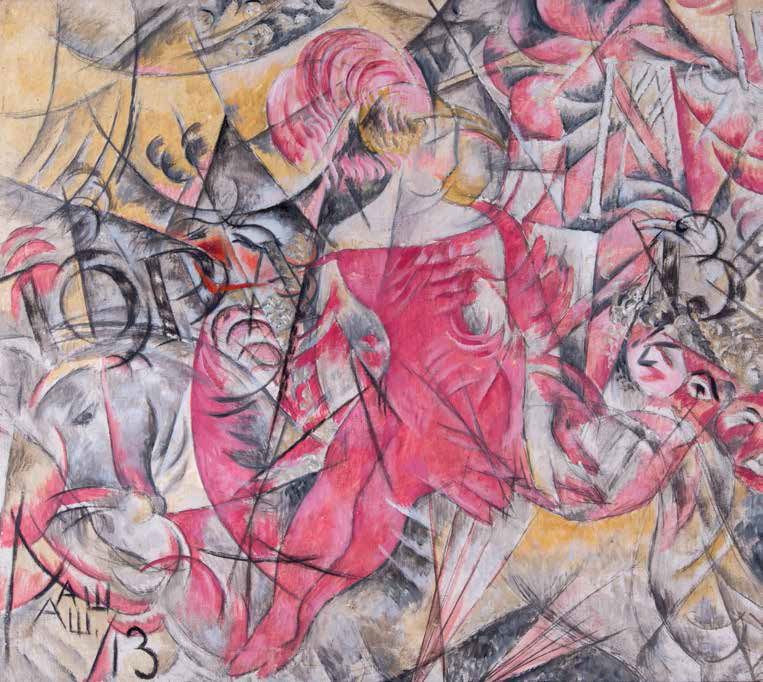 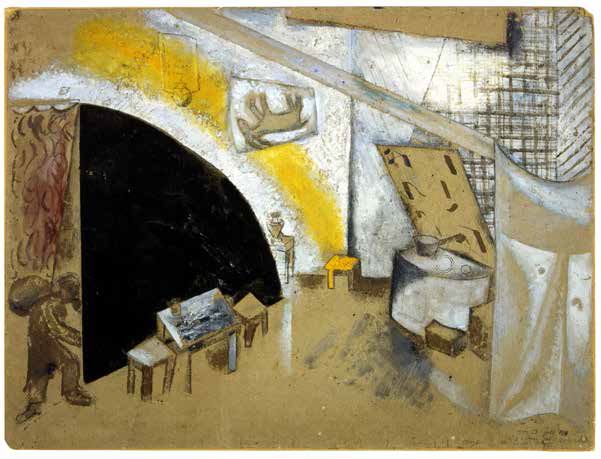 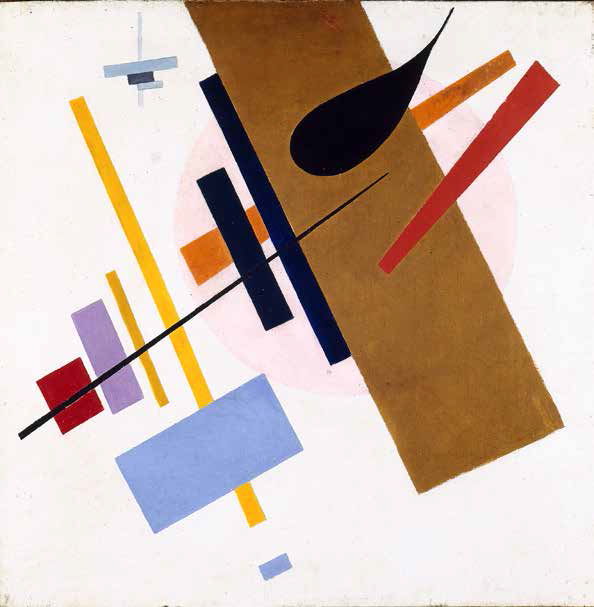 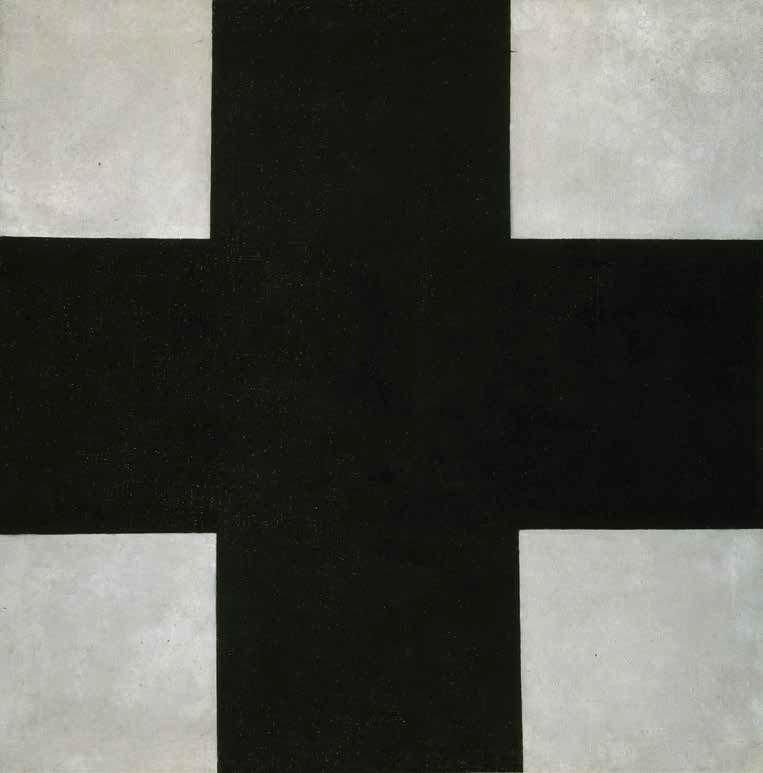 The exhibition From Chagall to Malevich: Art in Revolution brings together important works by all those artists who, at the turn of the 19th to the 20th century, threw out all the established norms and were forerunners of modernity in a way never before seen in Russia. It can be seen from February 9 through May 5, 2019 at Fundación MAPFRE’s Recoletos Exhibition Hall in Madrid.

In Moscow, prior to the outbreak of the First World War, popular imagery remained the vigorous reflection of craftsmanship full of vitality, very present in everyday life. Ilya Mashkov and Aristarkh Lentulov, and not forgetting Pavel Filonov, evoke the roots of their country, but principally with the intention of reinventing its language. In Saint Basil’s Cathedral, by Lentulov, the power and history of the Orthodox religion are translated into a blend of colors and shapes with clearly near eastern influences. Filled with colorful bulbs, this composition reflects the beauty of painting that keeps the memory of eternal Russia alive.

One decade into the 20th century, Cubism was to influence many Russian artists, who discovered it on their travels, but also in Moscow. The Futurist Manifesto by Filippo Tommaso Marinetti, published in French as early as 1909, served as a reference for a whole generation of artists. A radical revolutionary, from 1914 onward the artist delivered numerous conferences in Russia. His inspiring oratory would give rise to another vision of modernity which, when combined with Cubism, gave rise to a specifically Russian school – Cubo-Futurism – in which a still image coexisted in a sudden, spontaneous fashion with an image in movement. In her 1913 painting Man + Air + Space, Lyubov Popova created a studied dynamic that extends to all her work, depicting more mechanized times and what the future holds. The influence of analytical Cubism would still be perceptible in the dark tones of Nadezhda Udaltsova’s work. 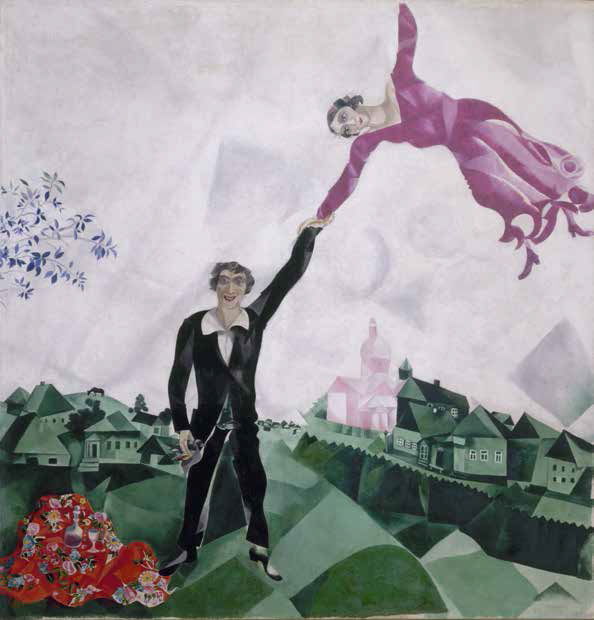 Yet another movement appeared at that time – Rayonism. The new powers conferred on the tones of light beams enabled simplified forms to be propagated on the canvas. Sometimes more figurative, other times more abstract, this short-lived movement developed by Mikhail Larionov foreshadowed future abstract styles. By his side was Natalia Goncharova, the painter’s partner and author of the dense, mysterious painting Rayonist Lilies in 1913. In his deconstructed, strident Portrait in 1915, Larionov captured the complex, multiple truths surrounding the composer Igor Stravinsky. They were joined by Alexander Shevchenko to express the ineffable pace and perceptible effort of the miracles repeated daily in the fast-paced, hazardous life of the Circus, although this picture, with its electric and acid colors, also bears the hallmark of the Cubo-Futurist school.

Marc Chagall returned to Russia just before the First World War and remained in the country during this period, in which the revolution also broke out. Chagall’s universe, opposed to any preconceived notions, was always devoted to Russian poetry and popular culture, without forgetting the Jewish cultural tradition. An atypical creator, Chagall addressed painting based on wonderment and his impassioned investigations brought decisive commitment to the avant-garde movement of his time. The artist incorporating wondrous aspects to everyday life. After being appointed director of the Fine Arts school in his hometown, Vitebsk, he came up against the radical thinking of Kazimir Malevich, who he had invited as professor, along with many other artists like El Lissitzki and Jean Pougny. “My disheveled brush is incapable of extracting from the brain’s convolutions what the sharpest pen can reach. Painting is long obsolete and the painter himself a prejudice of the past,” Malevich wrote in the introduction to the album of lithographs Suprematism: 34 Drawings1. They are words that sound like imposition. Rupture comes eventually, inevitable and painful.

A brusque charlatan, the revolution was to impose the power of realism on its images to directly influence those it wished to address, so as to be effectively heard

The absolute ideal notion conquers the whole of society, which appears transformed by the incredible hope the revolution inspires. The tragic execution of the Imperial family in 1918 did not alter the population’s profound feelings with regard to the revolutionary movement, convinced as they were that a new world was coming into being. The past was a tabula rasa. This requirement would be met by the Suprematism created by Kazimir Malevich, a movement which offered the possibility – unique, in his view – of going down unexplored paths. The demonstration of the strength of a square, or quadrangle, in the 0.10 exhibition organized in Petrograd in 1915 caused a total break from, and the abandonment of, any figurative representation. The purity of these primary forms afforded greater force to their confrontation, generating a visual and mental impact indelibly etched on people’s memory.

Later, autonomous forms emerged in his art which constituted a new, complex organization of its interpretation. The gravitation of these abstract forms with their pure colors filled an immaculate canvas. These compositions are spread over several years of investigations and, in the 1920s, led Malevich to devise the Architectons, vertical or horizontal constructions within space, playing with the rejection or attraction of the Earth.

During the years following the revolution, art was also in the street. The streets were filled with adornments conveying messages from painters and sculptors, without forgetting the architects, all of whom expressed their allegiance to these historic moments they wished to share with the Russian people, just as convinced as them. Easel painting seemed to have been relegated to the farthest reaches of memory. New media appeared. Vladimir Tatlin and Jean Pougny accumulated curious, unlikely materials, such as wood, metal and glass, and conceived new structures that took over space, conferring on it a new function. Thus emerged the Constructivist works, taking control of space and giving it another function. Constructivism made a lasting impression on the 1920s, while the polemic coexistence of the avant-garde movements and Suprematism led to them spearheading an idealized society. 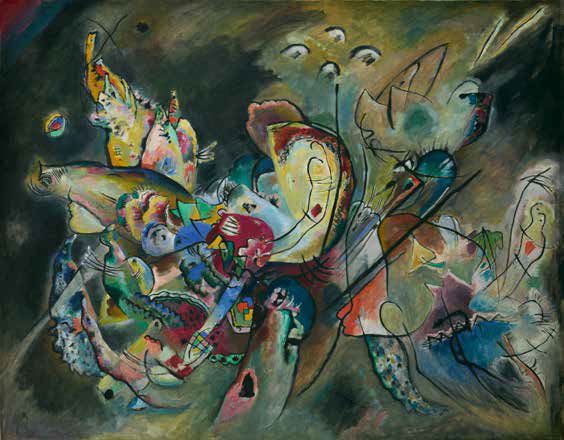 Mikhail Matyushin, a friend of Malevich and admirer of his art, played multiple roles. Together with his friend Boris Ender, this musician and painter founded a school in which Ender’s sisters, Xenia and Maria, also worked. Regrouped together within the Ginjuk [National Artistic Cultural Institute] and Zor-Ved [Vision-Cognition], their investigations focused on color, its power, its mutations and its movements. They all evolved toward a non-figurative art form which played with the interaction of colors in order to generate the sensation of an endless vision, seemingly extending beyond the canvas, invading space. These constructions, with their disparate shades, impose an expanded visual field on the retina. A world of light illuminates the 1921 work Movement in Space, an imposing painting by Matyushin whose great oblique beam, oriented toward an imaginary sky, restores the power of color in painting.

It was not the revolution that forged the avant-garde and modernity. One can only wonder whether it even contemplated them. Probably those men and women whose desire was first and foremost regime change and dreaming of freedom did not either? It was the artists who set themselves up as revolutionaries before the revolution, confident that it would turn out as they expected, and, therefore, what it expected of them. This misunderstanding led to disappointments which must also be taken into account as major ferments of an abs tract, almost definitive, language. A brusque charlatan, the revolution was to impose the power of realism on its images to directly influence those it wished to address, so as to be effectively heard.

An impactful summary, which could serve as a title for this exhibition: From Chagall to Malevich: Art in Revolution.