Soy Cappaz, the mobile app that empowers thousands of people

The smartphone is one of the most powerful technologies in our daily lives.With the Soy Cappaz app, it becomes a tool for transforming the lives of people with intellectual disabilities.

It is increasingly common to see something like this on our streets: people (we ourselves are often guilty) totally engrossed as they stare at their smartphone, searching for information, looking at a map or reading the news. A picture that often leads to the habitual reflections on the degree to which the new technologies can end up isolating us from others. But perhaps not enough emphasis is placed on the digital revolution’s ability to enhance connectivity, even managing to integrate into society those who find this most difficult. As is the case for people with intellectual disabilities.

This is the story of one of those small revolutions: the mobile application created by Fundación MAPFRE and the Gmp Foundation to help them in their development as individuals. This tool can now be downloaded for free in any English or Spanish-speaking country, according to the language of the device’s operating system, regardless of the country you are in.

If there were a contest to choose the best name for a service, Soy Cappaz would be the unanimous winner. The effective combination of just two words (I’m Capable in English) sums up its inspiring message: software that empowers and prepares users for their daily family, social and work routines. “Previously, they [my parents] never left me in peace, always wanting to accompany me. But now, with my smartphone, I can go to work on my own, go out with my friends or wherever, and nobody’s worried about me.” This is the view of the young protagonist of the promotional video for Soy Cappaz, which can be seen on Fundación MAPFRE’s YouTube channel. 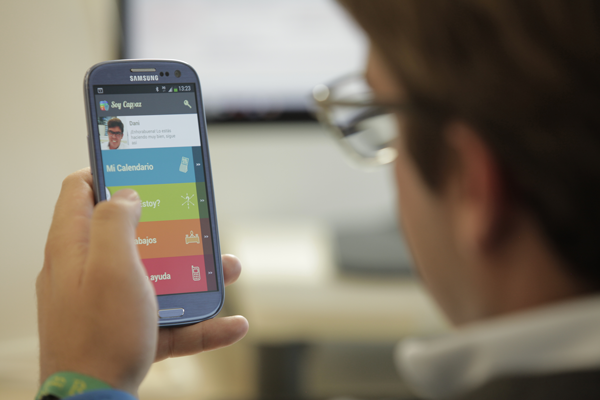 This is in the script for good reason. It faithfully reflects the experience of thousands of families with a member with some intellectual disability at home. As José Francisco Fernández, director of the Gmp Foundation explains: “There were some parents who told us that they were totally in favor of encouraging their children to be independent. They said they let them go to the special employment center or workplace on their own, but, as soon as they left the house, could not resist the temptation of getting in the car to follow them and see whether they actually reached their destination.”

As pointed out in an interview by María Soledad Cisternas Reyes, United Nations Special Envoy on Disability and Accessibility, the families have the duty to empower these individuals so that they can develop their personal and social skills, “and thus avoid resorting to overprotective measures; rather, they must strive to provide them with the tools – and the freedom – needed to be able to cope with daily life perfectly well, on equal terms with their peers.”

This is the reality – albeit, undoubtedly, with a multitude of nuances – faced by the one percent of Spaniards with some kind of intellectual or developmental disability, according to the calculations of the Plena Inclusión organization. A significant population group which, nonetheless, has often been neglected with regard to accessibility, given that the endeavors generally focus more on physical and sensory adaptations.

It is therefore no exaggeration to say that Soy Cappaz was created to fill a void. As Fernández points out, “in this age in which we live, with the ongoing technological development, we felt that this kind of situations could be avoided.” Moreover, from the United Nations observatory, Cisternas notes that “technology is not a luxury for people with disabilities, but rather a necessity.”

Soy Cappaz required 16 months to create and, since its launch in October 2015, has been downloaded thousands of times on devices running Android, the operating system for which it was designed. Most of these downloads are in Spain, although, as from 2016, numbers have been increasing in the rest of the world, as it can also be installed on smartphones in a further 20 countries (Argentina, Brazil, Bolivia, Chile, Colombia, Costa Rica, Ecuador, United States, El Salvador, Guatemala, Honduras, Mexico, Nicaragua, Panama, Peru, Dominican Republic, Turkey, Uruguay and Venezuela).

Jose Carlos, one of its users, has given Soy Cappaz five stars on the Google Play download platform. These are his reasons: “It’s a very good application for people with intellectual disabilities. My most sincere congratulations. Keep up the good work and make more apps for us.” One of those mobile apps “that were really needed. Hopefully, there will be more support for initiatives of this kind,” says Pepe, another user, who defines it as “very useful, simple and intuitive.” Civil society has also recognized its merits, acknowledged by various institutions and organizations through awards from associations such as Autelsi, Corresponsables and Supercuidadores.

But how has its design warranted so much praise? Its design is the result of compiling the needs various intellectual disability institutions have passed on to us,” explains José Francisco Fernández. In particular, from contacts with the Garrigou Foundation and the María Corredentora Special Education Center in Madrid, with its 50-plus years of experience, as well as the collaboration with Down Spain and Plena Inclusión Madrid. 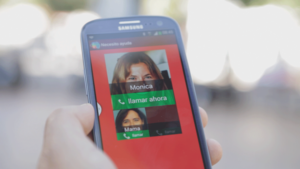 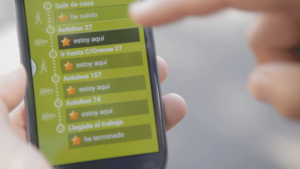 The application displays an opening screen with four main sections:
• My Calendar,, an agenda listing important events, linked to the Google Calendar application and ready to send out messages and reminders.
• Where Am I?, which lists the routes usually taken by users on their own, showing as many intermediate points, or breadcrumbs, as needed. “If users deviate from the route, whether in terms of time or distance,” Fernández points out, “the contact person receives an email.”
• My Tasks, with personalized video tutorials on specific everyday tasks, ranging from how to use the printer at work to how to put the washing machine on at home, which are activated by scanning bar code labels.
• Finally, I Need Help is a button to communicate directly with the support personnel in case of emergency.

Belén Gómez works at Astor, an association in Torrejón de Ardoz (Madrid) which strives to ensure that “all people with intellectual or developmental disabilities, and their families, can achieve true quality of life, as citizens with full rights in a society where fairness and solidarity reign.” She has been able to verify firsthand how Soy Cappaz is helping to make that “self-determination of all individuals” which it promotes a reality, as well as their right to participate in society with guarantees of equality.

“In our case, in the workplace, it provided support for the autonomy of workers performing various tasks, particularly door-to-door mailings,” Gómez remarks. She also underscores the benefits of the video tool: “There are people who find it difficult to know which bus to catch and others have doubts about the task to be performed. The videos can be recorded on an individual basis and adapted to each person… In our work environment, for example, the use of the microwave was complicated; so, we recorded the video and placed a sticker on it for them to scan with their cell phone and watch the explanation.”

It is precisely this range of everyday acts which, taken together, can do a lot for the quality of life of users of Soy Cappaz. And this is what enables them to develop as individuals, but also as workers. According to figures from the Spanish Public Employment Service, solely 37.9 percent of Spaniards of working age with a disability have a job or are looking for one, compared with 76.9 percent for the rest of the population. A gap that mobile applications such as the one created by Fundación Mapfre and the Gmp Foundation are managing to close

According to the United Nations, over one billion people in the world live with one or more impairments, whether physical, sensory, intellectual or developmental, thus constituting the largest minority in the world. The First Ibero-American Conference on Technologies for Inclusion, which was held March 7-9 in the Mexican state of Zacatecas, was dedicated to them. The event boasted a comprehensive panel of experts from both sides of the Atlantic to discuss the possibilities presented by current technologies “to ensure that those of us with disabilities can enjoy better opportunities in the various spheres of our development,” declared Lourdes Rodarte, who runs the Institute for the Attention and Inclusion of People with Disabilities in Zacatecas. The program put together for the conference prioritized practical – rather than academic – aspects, welcoming and publicizing initiatives such as the Soy Cappaz mobile application, created by Fundación MAPFRE and the Gmp Foundation, which is available on Google Play for Android devices in 21 countries, including Mexico.