“I was eager to penetrate the other world, this fringe world, the secret, sinister world of mobsters, outcasts, toughs, pimps, whores, addicts, inverts. Rightly or wrongly I felt at the time that this underground world represented Paris at its least cosmopolitan, at its most alive, its most authentic, that in these colorful faces of its underworld there had been preserved, from age to age, almost without alteration, the folklore of its most remote past”(Brassaï, 1976).

This was how Brassaï expressed it in his introduction to Le Paris secret des années 30. The book was published in 1976, some forty years after completing his extraordinary photographic compilation of the lowest strata of Parisian society. Brassaï had exerted considerable effort, as well as tremendous power of persuasion, to be able to enter the tough world that fascinated him so much, and mixing with those thugs, prostitutes and pimps posed a genuine personal risk.

But Brassaï’s secret Paris held no secrets. On the contrary, it was both a genuine reality and an elaborate legend, as suggested by the photographer himself on referring to “the folklore of the most remote past [of the city]”. The heroic figure of that folklore was the poet and outlaw of the 15th century, François Villon, whose name was unceasingly invoked. In the mid-19th century, it was widely agreed that the true spirit of Paris, rooted in the distant past, was to be found in those living on the margins of society. In the forty or fifty years before Brassaï took up photography in 1930, a rich visual imagery appeared – much of it in the popular press – that was truly on a par with the literary fables of the lowest depths of the underworld. Brassaï’s great achievement was to transfer those images to the freshest medium, namely photography, in its most visceral, immediate form. 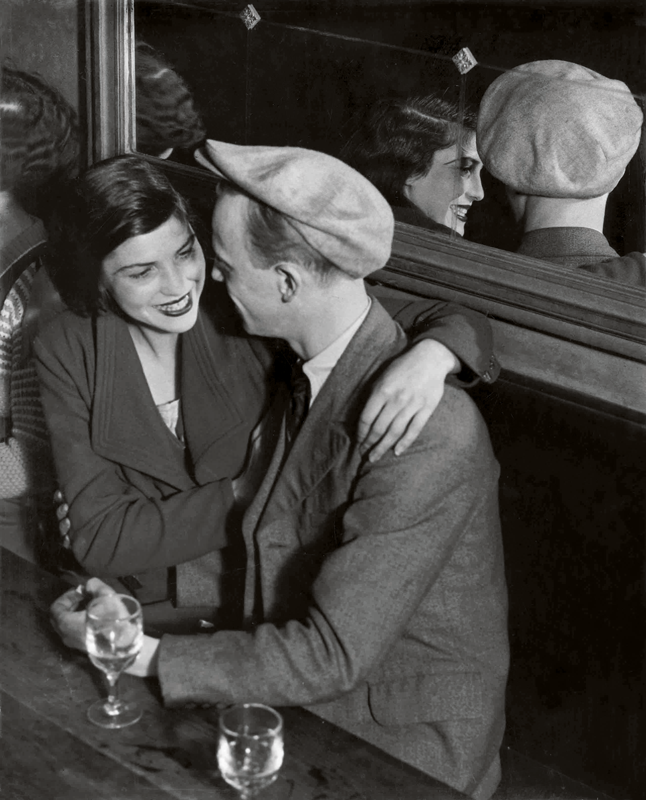 Among the most noteworthy haunts of Brassaï’s shady characters were the dance halls, called bals musette for the bagpipe instrument which the peasants of Auvergne had brought with them in the 19th century. (In the 20th century, the musette had given way to the accordion, but the name remained). In artistic terms, Brassaï’s most prolific location was perhaps the Bal des Quatre Saisons in Rue de Lappe, near the Place de la Bastille.

His photographs in the Quatre Saisons are anything but informal and spontaneous. The camera was set on a tripod and each exposure called for the intrusion of a powerful flash. Brassaï had taken the time, and worked hard, to earn the trust of his subjects and, to some extent, they were acting for him. Partly as a result of this, in photographs like this one he was able to distill the hustle and bustle of dance hall romance into a convincing archetype, made even more vivid by the reflection in the mirror. It is the unwavering durability of that archetype which earned Brassaï a permanent place in the crowded pantheon of Paris-based artists.

Peter Galassi (1951) was head curator of the Department of Photography at the Museum of Modern Art (MoMA) in New York from 1991 to 2011. In 2012 he was awarded a Guggenheim Fellowship.