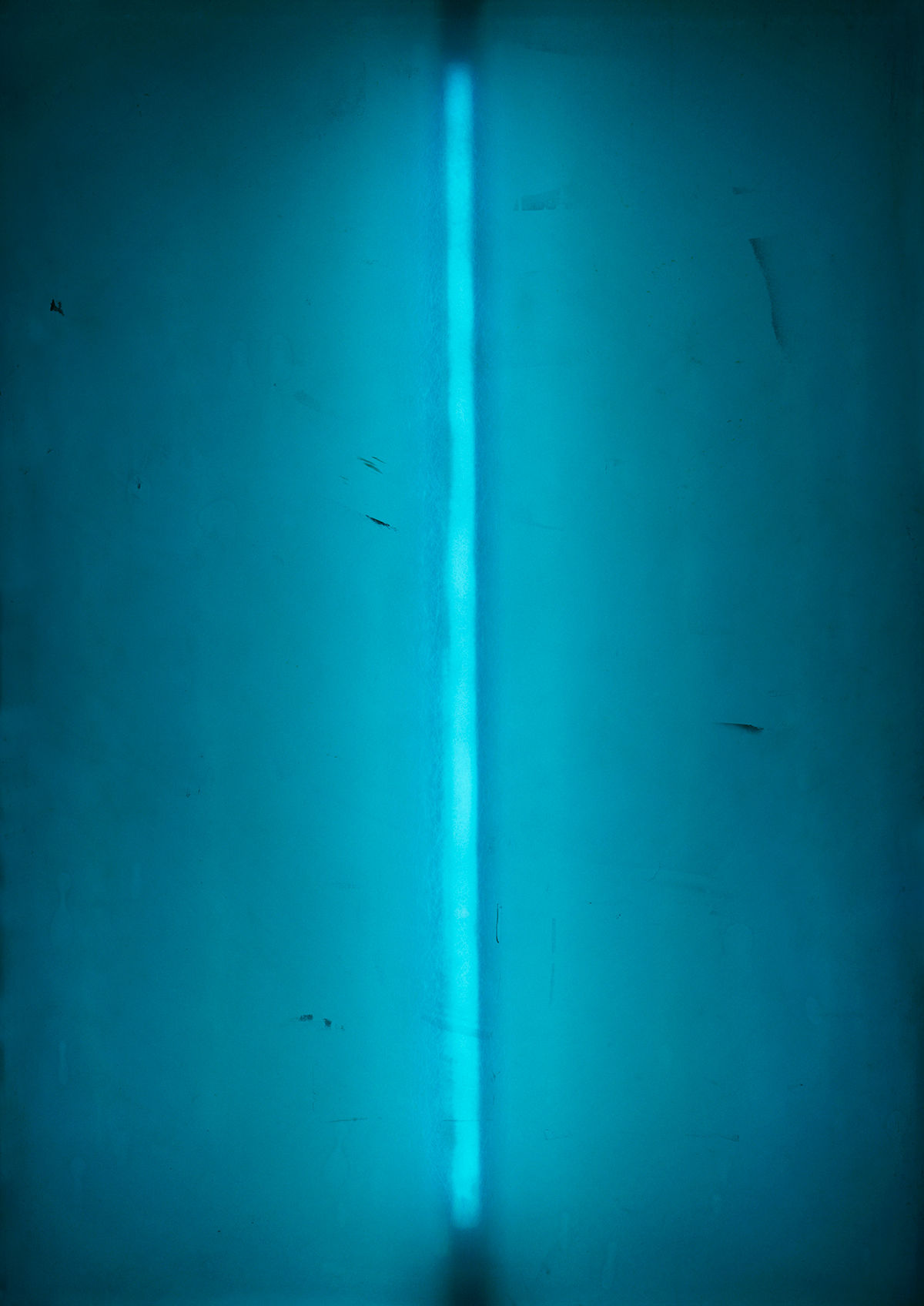 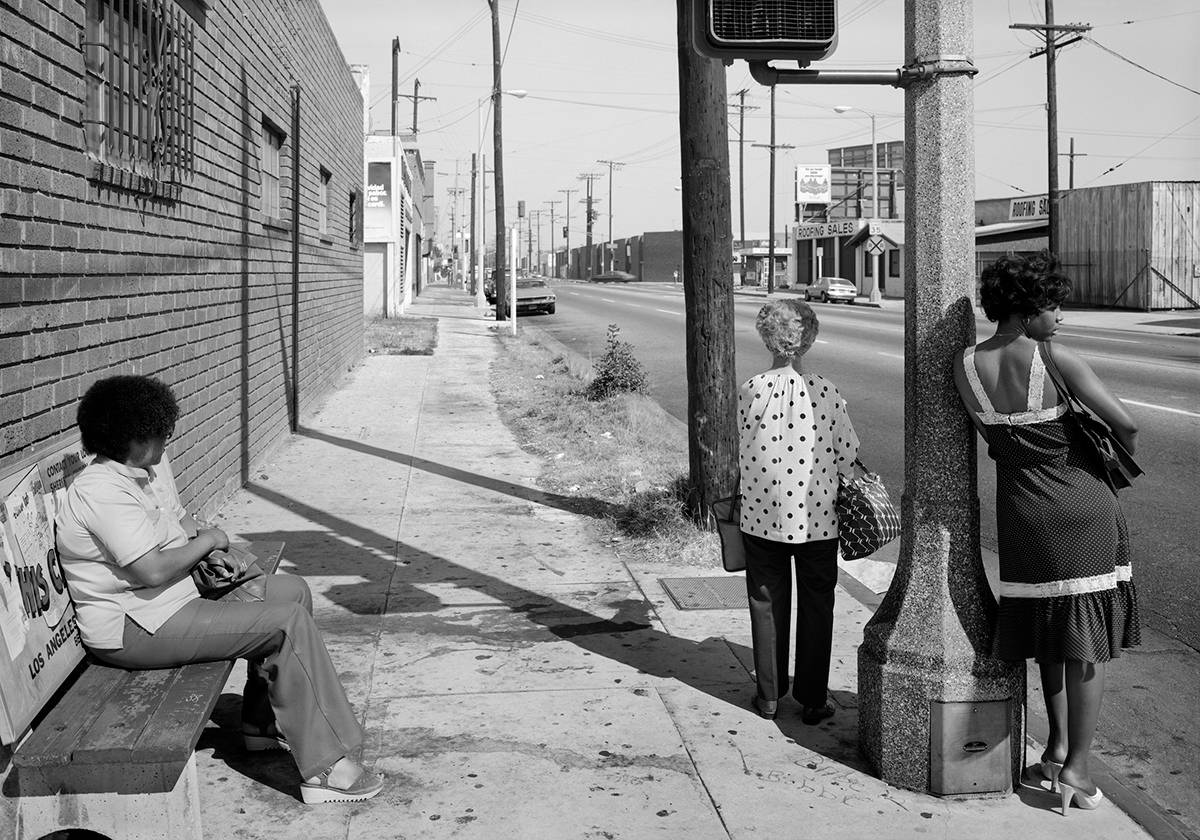 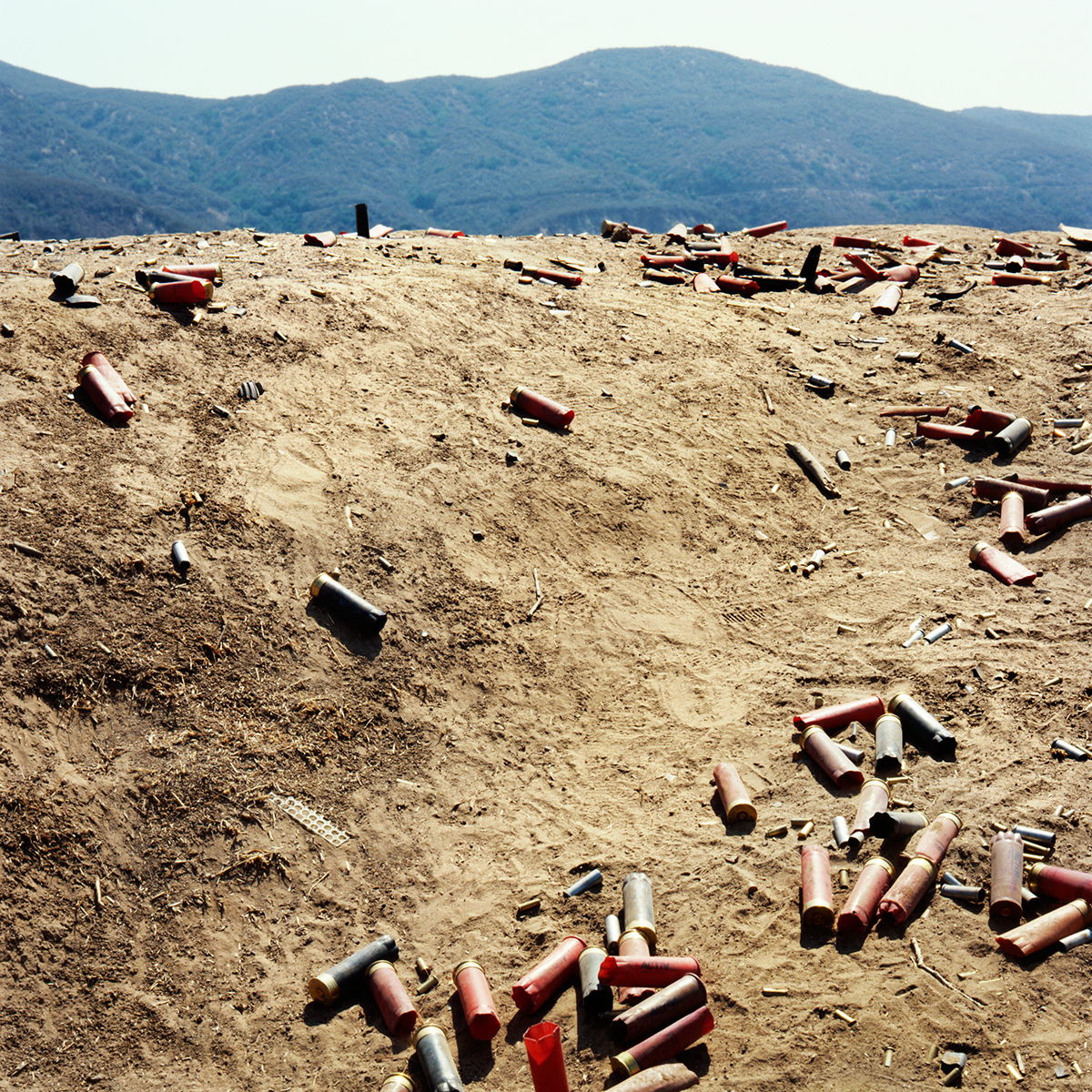 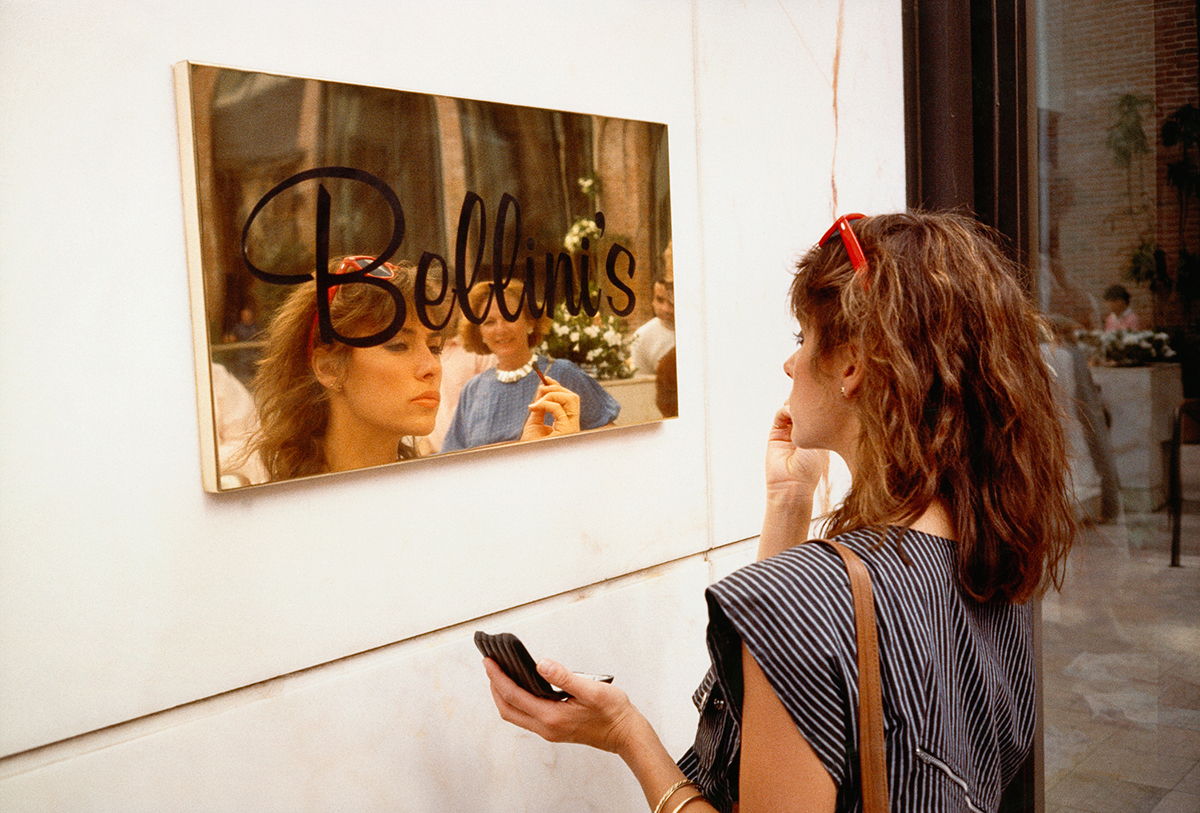 Fundación MAPFRE has announced the first retrospective in Spain of the great American photographer Anthony Hernandez. With over 130 photographs, many of which have never before been displayed or published in Spain, Anthony Hernandez can be seen from January 31 to May 12, 2019 at the Bárbara de Braganza exhibition hall in Madrid. This exhibit will present the broad spectrum of works from Hernandez’s extensive, prolific career and will be a celebration of the unique style of street photography developed by the artist, and its evolution over time.

“Hernandez’s photographs have been admired for a long time by curators, collectors and other photographers,” declares Erin O’Toole, the exhibition organizer and associate curator of photography for the Baker Street Foundation of the SFMOMA.

The son of Mexican immigrants, Hernandez was born and raised in Los Angeles. Unfamiliar to a large degree with the formal traditions of the medium, he developed his own particular photographic style, adapted to the peculiarities of his hometown, its desolate beauty and its growing extensions of asphalt and cement. Throughout his career, Hernandez skillfully moved from black and white to color, from 35 mm to large-format cameras, from the human figure to landscapes and details verging on the abstract, thus giving rise to an unusually varied oeuvre revealing common features such as breathtaking formal beauty and a subtle commitment to contemporary social issues.

Among the outstanding images on display are black-and-white photographs from the early 1970s taken on the streets of downtown Los Angeles, color photographs taken on Rodeo Drive in the mid-1980s and a selection from his critically acclaimed series Landscapes for the Homeless, which he finished in 1991. For this series, Hernandez photographed discarded objects strewn around empty homeless encampments, a glimpse of the lives of the people who at some point sought refuge there. Visitors to Anthony Hernandez will also encounter more abstract work, in the form of large format, color photos taken recently by the artist in Los Angeles and on his travels to places ranging from Oakland and Baltimore to Rome.

Hernandez has published six monographs and his work has been seen in numerous group exhibitions, such as Crossing the Frontier (SFMOMA, 1996) and Under the Big Black Sun (MOCA, 2011). In 2009, his work was the subject of a monographic exhibition at the Vancouver Art Gallery, curated by the artist Jeff Wall, while this same exhibition was previously showcased at the San Francisco Museum of Modern Art (SFMOMA) in 2016. 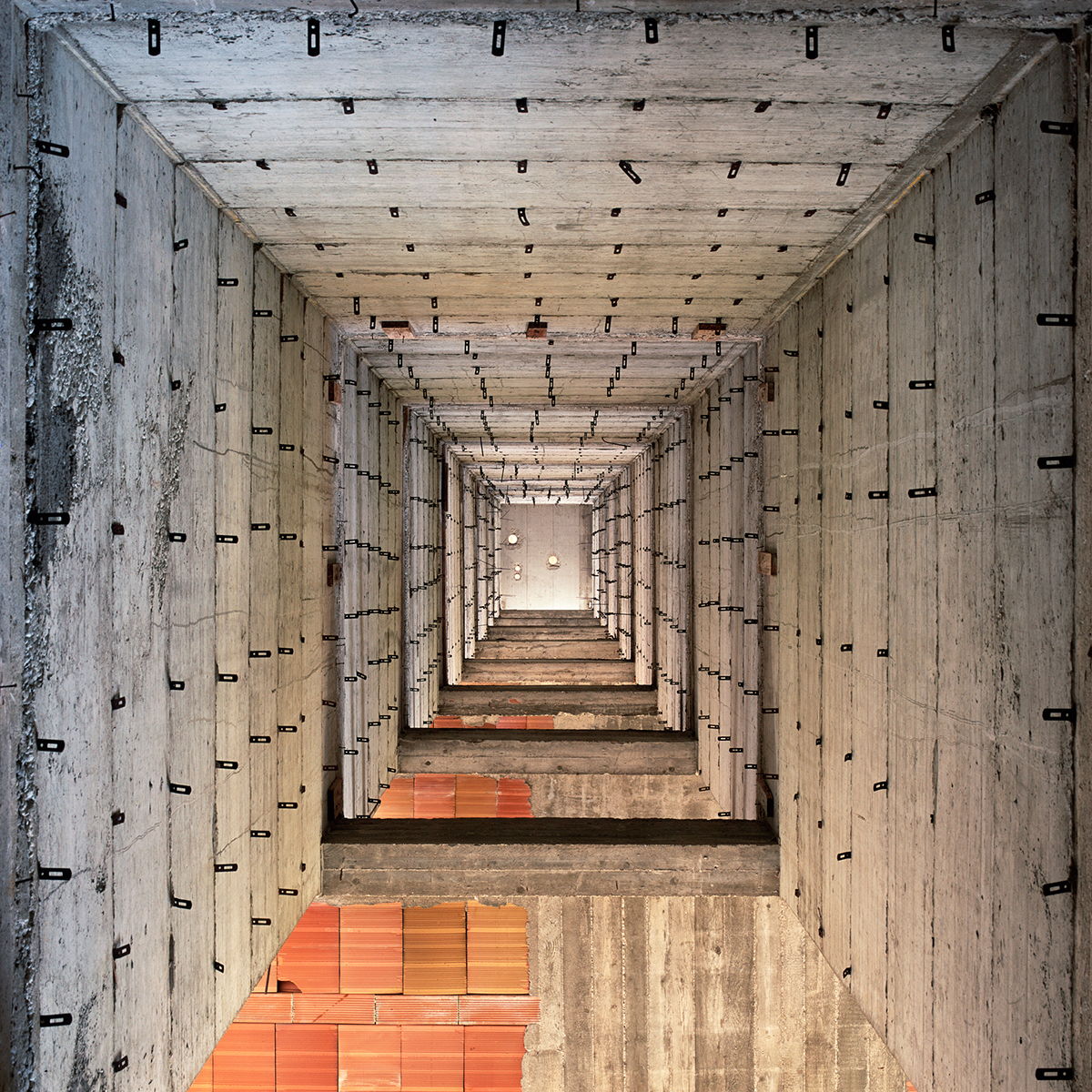 The exhibition is accompanied by a fully illustrated catalog published by Fundación MAPFRE, in collaboration with the SFMOMA and D.A.P. (Distributed Art Publishers) in New York. With over 200 black-and-white and color photographs, the book also includes a preface by the photographer Robert Adams, texts by Erin O’Toole and Ralph Rugoff, director of the Hayward Gallery in London, as well as a conversation between Hernandez and his old friend, the photographer Lewis Baltz.

Overview of the exhibition

This display leads us through six sections in each of which we will see examples drawn from some point of the photographer’s career which spans over forty-five years.

The first section, Street Photographer, presents some early local images with a subtle humorous tribute to the Californian photographer Edward Weston (1886-1958). Hernandez began to consciously indulge in the American tradition of street photography, defined by photographers such as Robert Frank, Garry Winogrand and Lee Friedlander. Although he worked primarily in Los Angeles, he also took photographs in Madrid and London during his first trip to Europe; in Washington, D.C., as artist in residence at the Corcoran Gallery of Art in 1975; and in New Orleans, Honolulu and New York. In 1984, he produced Rodeo Drive, his final collection depicting people and the first in color. Since then, he has worked exclusively in color. Rodeo Drive was also the first project on which Hernandez worked with the master printer Michael Wilder. All the inkjet prints in this exhibition and almost all of the Cibachrome prints were produced by Wilder in collaboration with the artist.

Throughout the second section, the City is presented as an essential theme of his photography. From 1978 Hernandez began to use a Deardoff 5 x 7″, a bulky view camera that required the use of a tripod. Not being able to keep moving nimbly through the crowds or go unnoticed among the passers-by, he was forced to adapt his methods and totally rethink his street work. As he had to move more slowly and keep away from his subjects, his perspective was expanded and he started to observe how most of those around him, poor and working-class people, navigated an urban environment seemingly designed without taking into account their needs. The result was a totally original type of street photography in which the city is both the theme and the setting of the photographs. Working in this way, Hernandez produced four interrelated series between 1978 and 1982: Automotive Landscapes, Public Transit Areas, Public Fishing Areas and Public Use Areas. These photographs capture not only the visual qualities of Southern California, but also its social reality based on class difference. 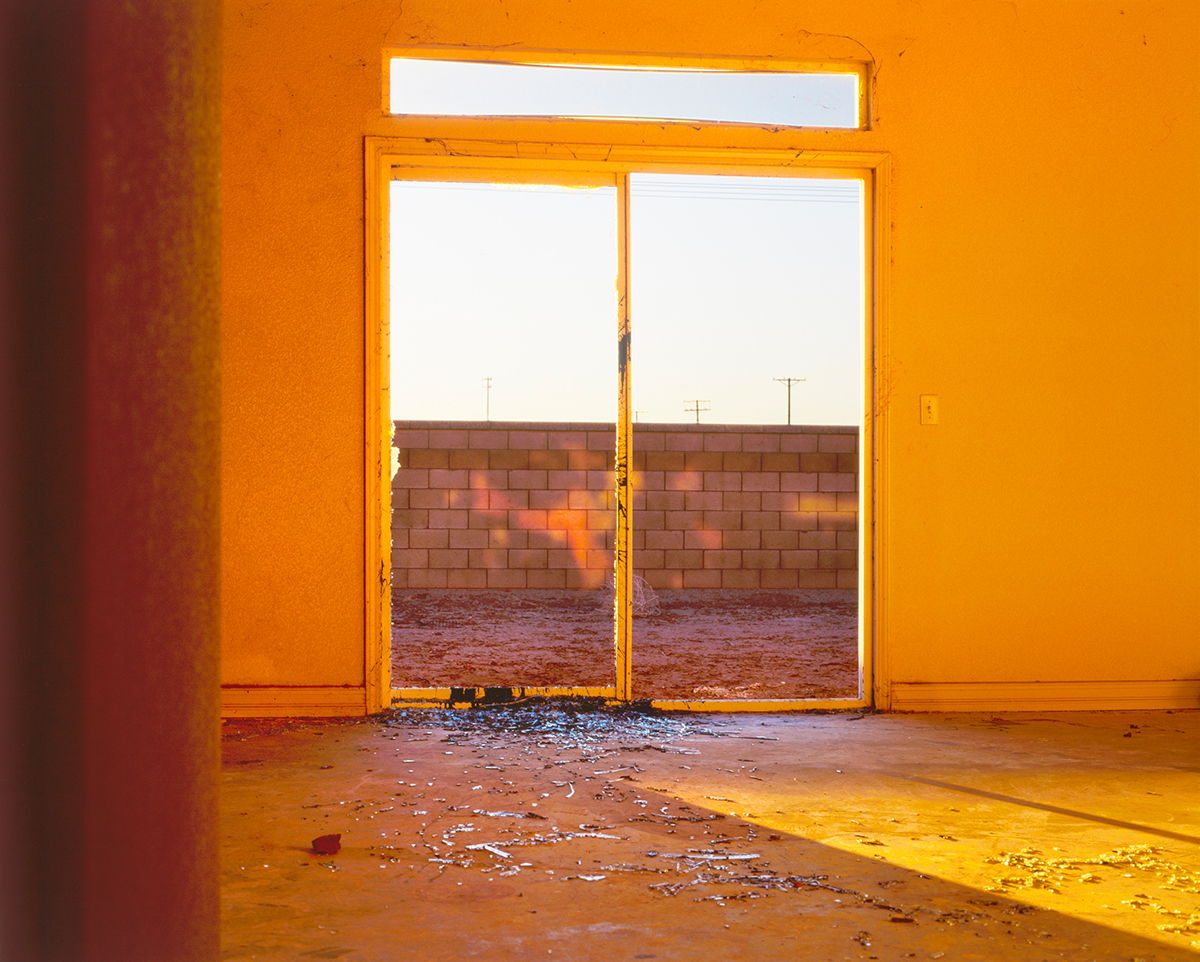 Hernandez did not find his true vocation as a photographer until he began taking shots in which no people were present. The next section, Absence and Presence, displays his first series totally devoid of human figures entitled Shooting Sites. He started it during his time as artist in residence at the University of Nevada, Las Vegas, and finished it at the Angeles National Forest, on the outskirts of Los Angeles County. We will also come across another project with a similar approach, Landscapes for the Homeless (1988-1991), where he concentrated on taking pictures at homeless encampments on the streets of Los Angeles. Using precise framing, he imposed order on the chaotic scenes he came across and humanized his absent subjects by paying attention to what they had left behind, in much the same way as an archaeologist would.

In Urban Ruins and in the following two sections, Hernandez explores interconnected visual themes to which he has repeatedly returned since the late 1990s: brick walls, fences, windows and holes of various shapes and sizes. These shapes, mostly squares or rectangles – a window covered with paper; a bright yellow wall with countless scratches, holes and splotches of paint; a door with a strangely lit surround – are often presented on a flat plane, preventing access to whatever might lie beyond them.

While Hernandez’s photography is primarily set in Los Angeles, much of the work on display in this section was produced during his trips. Pictures for Rome (1998-1999) depicts the modern ruins that highlight the relatively disposable nature of contemporary culture, deliberately shunning the ancient ruins for which this city is best known. Oakland (2000- 2001) was produced as an artist of the Capp Street Project and East Baltimore (2006) as a guest of the prominent art historian and critic Michael Fried at John Hopkins University. These last two series depict dilapidated structures on the brink of being demolished, often focusing on the abandoned possessions and other vestiges of their former occupants.

The penultimate section will be dedicated to Signs and Traces. He shot the series Everything (2002) as he explored the riverbanks of the Los Angeles River, not far from where he grew up. Just like the homeless encampments he had previously visited, the river is something whose existence most of the inhabitants of L.A. are aware of, yet they never see it up close. As a child, Hernandez used to play along its artificial banks and in the drains that discharge their contents into it. When he returned as an adult, what he found was a landfill and a totally different world; he photographed the enormous cement sewer pipes, as well as the flotsam swept along by the current or thrown in by passers-by. Hernandez revisited the homelessness issue in Forever (2007-2012), photographing on this occasion from the perspective of someone living on the streets and looking out from within an encampment, rather than what has been left behind.

Finally, the exhibition ends with his latest series, Discarded (2012-2015), which marks his return to the natural landscape and panoramic views. Like much of his work from the late 1980s onward, these pictures offer both a reflection on the decadence of Southern California and a study of specific abandoned places, on this occasion communities devastated by the 2008 mortgage crisis and the subsequent wave of foreclosures, thus being forced to relocate to desert areas outside Los Angeles. The photographs speak volumes of personal failure and loss: the foundations of a trailer park that was never completed, an abandoned halfbuilt house, family pictures left behind in a vandalized empty house, a desolate, empty plot of land. In one of the artist’s few pictures since the 1980s depicting people, a disheveled man, who Hernandez came across living in an old school bus in Salton Sea, poses like a sentry watching over the remains of the apocalypse.