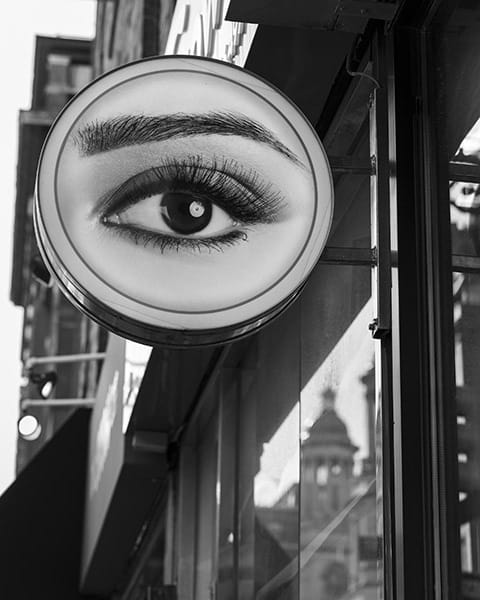 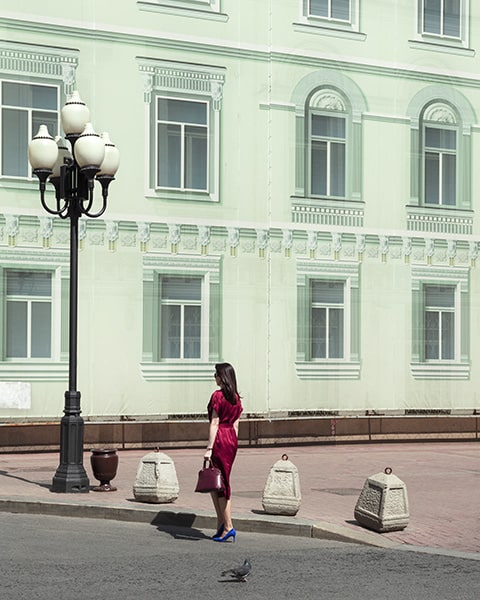 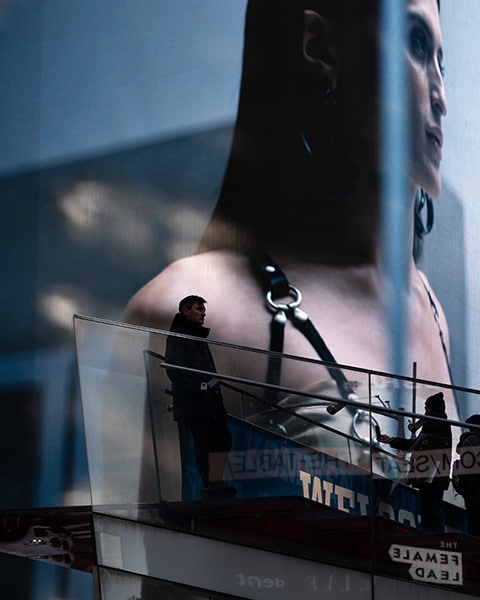 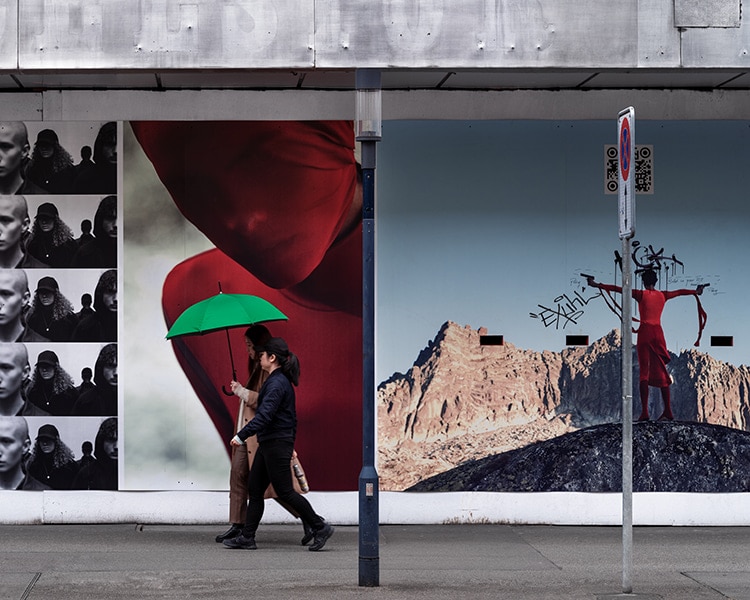 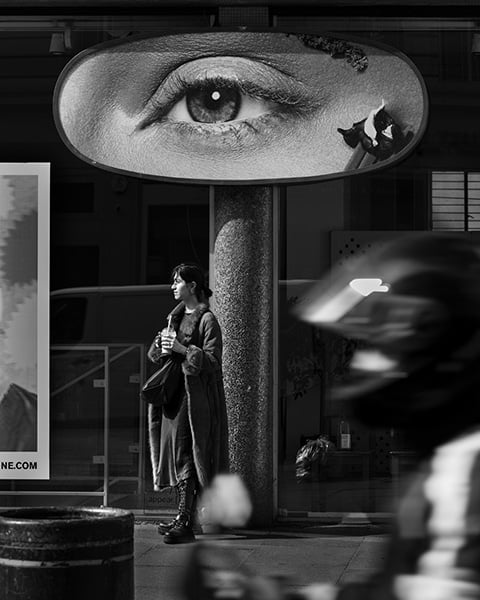 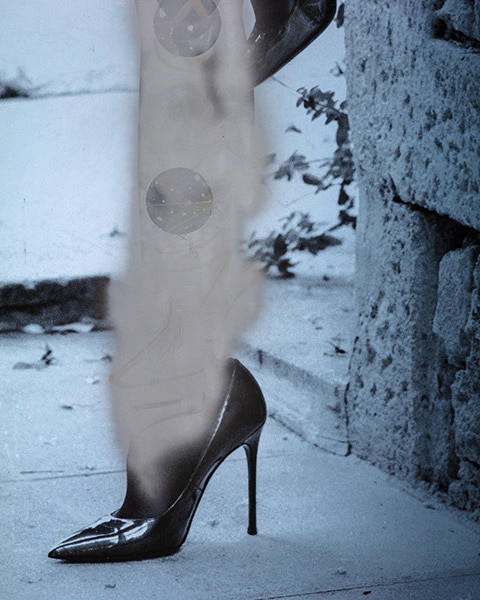 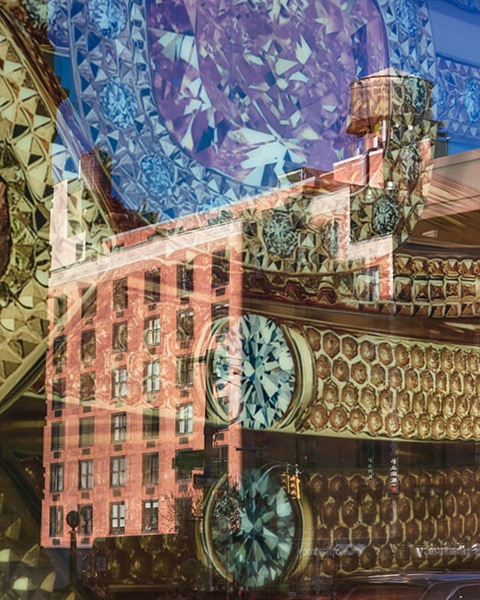 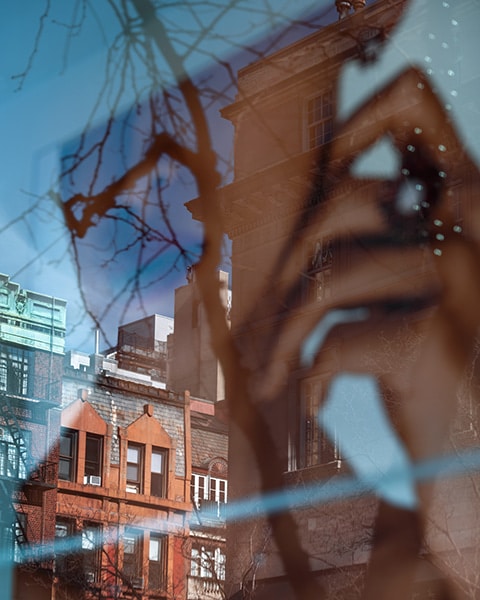 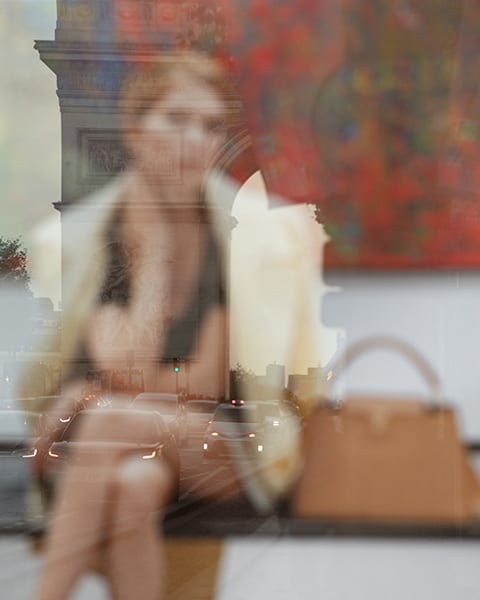 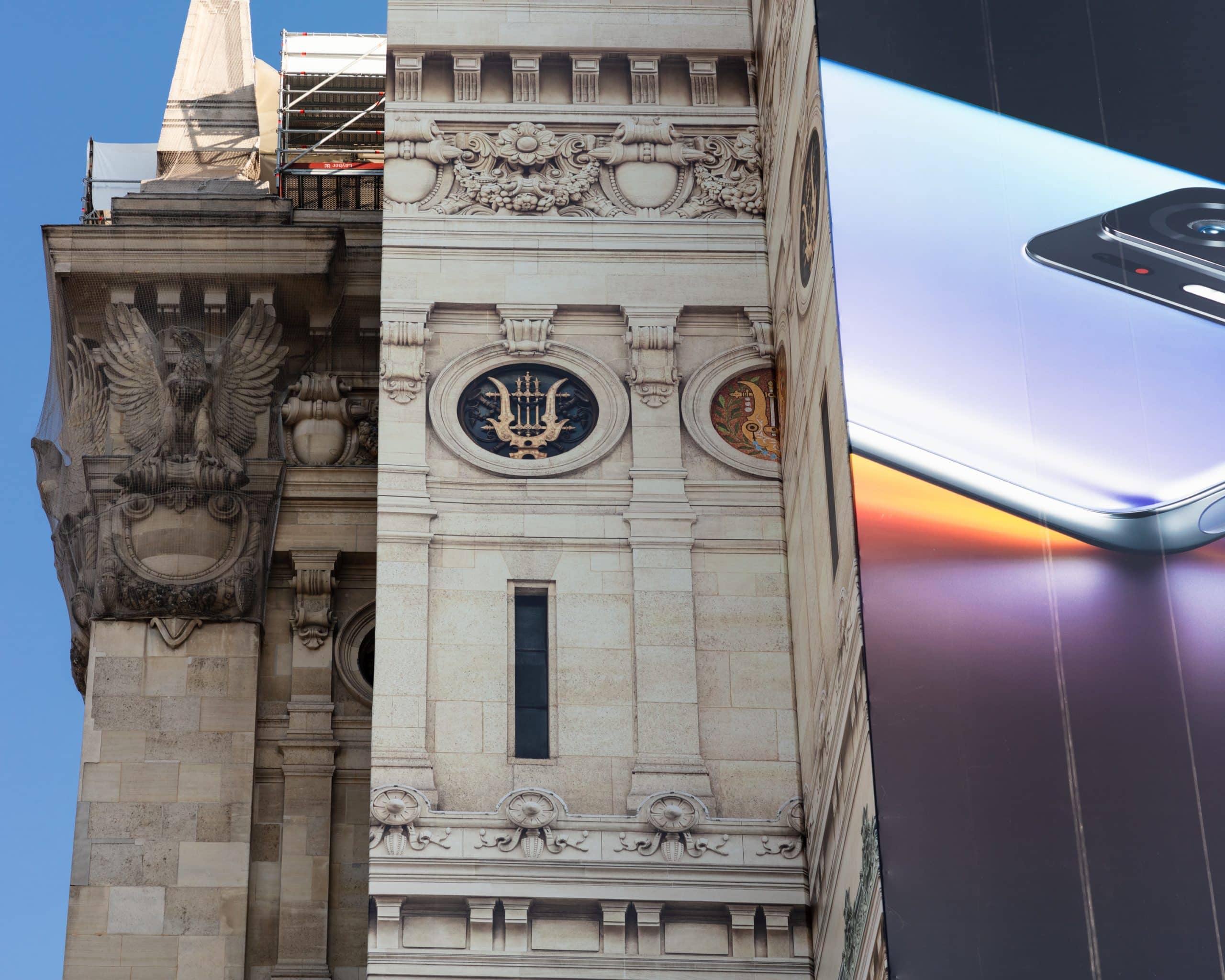 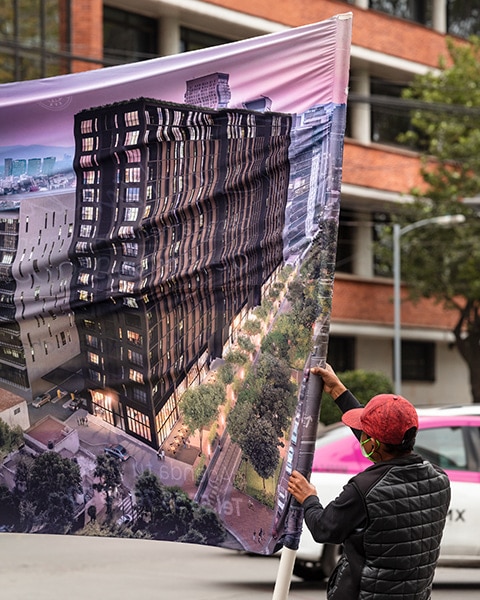 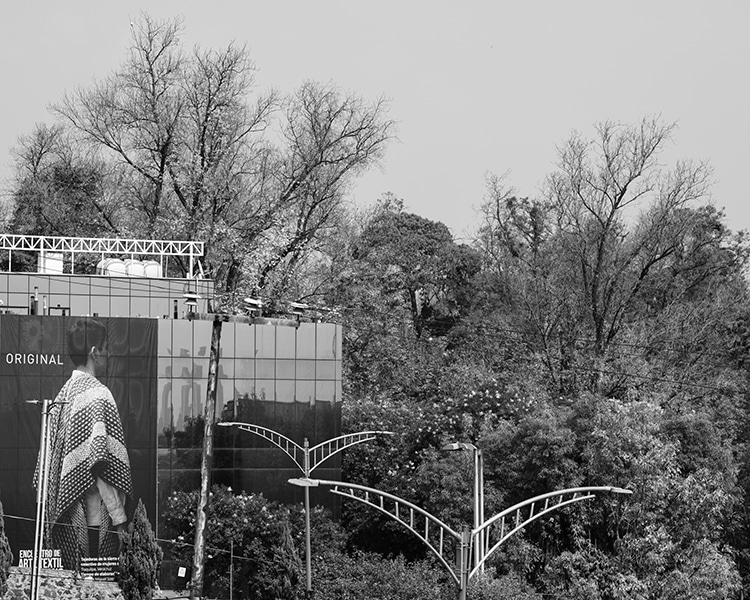 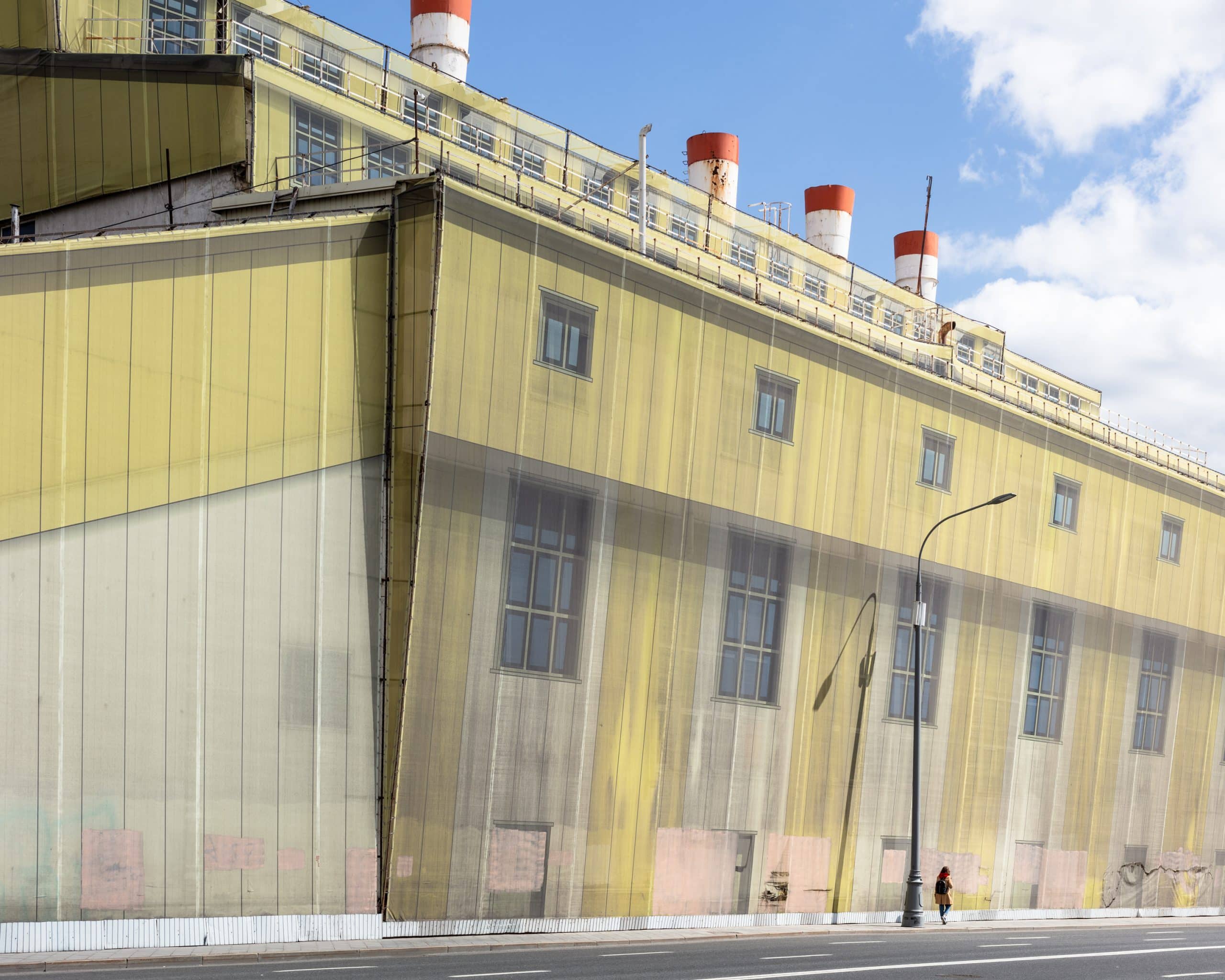 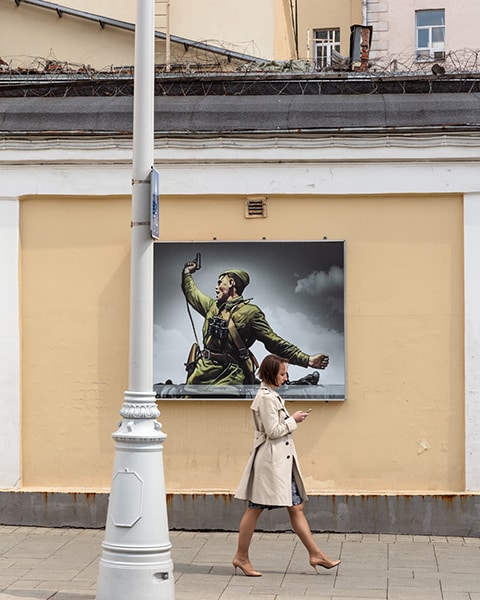 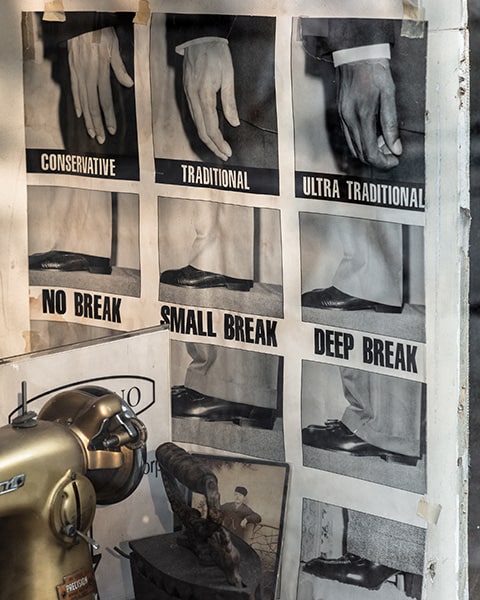 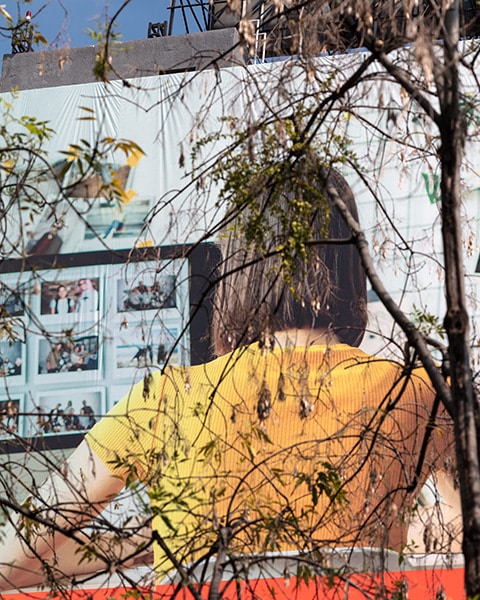 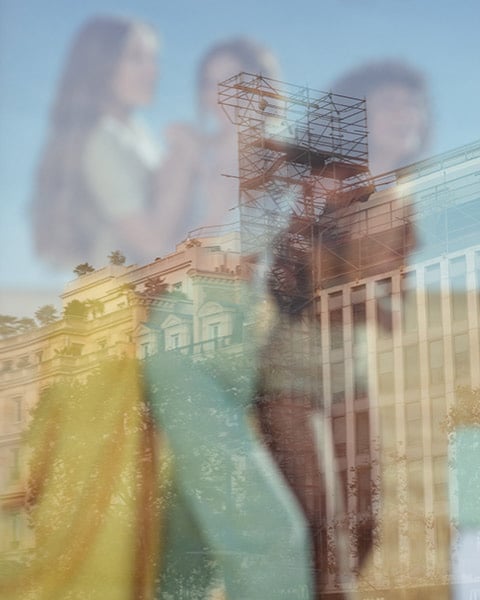 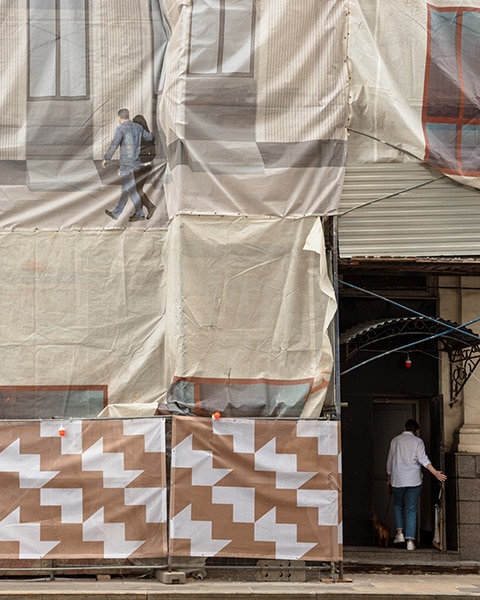 From February 16 to May 14, 2023, the winning project from the 1st edition of the KBr Photo Award will be on display at the KBr Barcelona Photography Center: the work of the photograper Anastasia Samoylova. The project, undertaken in various cities around the world, is a visual study of the ever-closer integration between the photographic image and the urban environment.

From her first projects, Breakfasts and Landscape Sublime —a series that began in 2013 and is still ongoing— it is clear that for Samoylova the composition of images is meticulously calculated, and collage and the superimposition of elements are fundamental to the result she is looking for. As she herself points out, the influence of Russian avant-garde painters, including Natalia Goncharova and Liubov Popova, has been very important in her approach to the representation of nature and its manifestations1. Indeed, in the Landscape Sublime photographs, perspective breaks down into a language that could be called cubist, geometric shapes and planes of colour accumulate and follow one after another, materials are superimposed in the visual collages that create these landscapes, categorised by the author according to their themes: mountains, storms, forests, cliffs, lightning, and so on.

It is a markedly manual and handcrafted working process, in which anonymous, royalty-free images found on the internet are printed, cut out, assembled, mounted and brought into the threedimensional, only to return to two-dimensions once they have been photographed. The process of creating these ephemeral structures reveals the skill acquired by Samoylova in her university training, as she had to make her own models for her academic projects.

Beyond the formal and the connection with core questions of the aesthetics of art like nature or the sublime, there are issues related to the use of photography itself and its capacity to shape our perception of reality. Throughout the series there is tension between the natural and the artificial, between anonymous and authorial photography, between natural landscapes and still life, between direct (straight) and constructed images.

Samoylova’s next work, FloodZone, is a continuation of some of these themes, but also a change of direction, as it is a project in which the author leaves her studio to photograph in the great outdoors. Through her wanderings around the city of Miami, she makes both herself and us aware of the double face of reality in the life of this city and, with it, the contradictions inherent in the society generated by ferocious capitalism.

On the one hand, it presents us with an idyllic setting but one that has experienced a growth and a boom in terms of unrestrained and limitless property speculation; on the other, it portrays a place that is literally sinking —a metaphor, perhaps. The images in the project show us the less attractive side of this city: flooded garages, fallen trees, waterlogged housing estates, together with ads and posters advertising attractive ongoing building developments, a promise of future happiness that seems to have expired and failed before it even began. Here we also notice Samoylova’s particular way of constructing images, which we will see more of in later works, especially in Image Cities: a play of reflections, superimposed geometric forms and planes of colour. This project first came to light in a book published by Steidl in 20192, followed by exhibitions at the History Miami Museum, the Chrysler Museum of Art in Norfolk, Virginia, and, more recently, at the George Eastman Museum in Rochester.

As a natural evolution of sorts, FloodZone is followed by the Floridas project, which also takes the form of a book, published by Steidl in 2022.3 Edited by David Campany — who has also contributed to the present volume— it is the result of the dialogue that the author establishes with the work of Walker Evans, who photographed the birth of the modern state of Florida from the 1930s onwards. Evans arrived there in 1934, on assignment, and continued to return for various reasons over the next four decades. Over this time he took numerous pictures, perhaps not among his most celebrated, that show the less recognisable and less stereotypical side of the place.

On one of her trips, Samoylova stumbled across The Mangrove Coast. The Story of the West Coast of Florida, a book written by journalist Karl Bickel and illustrated by Walker Evans in 1942.4 The author travels through Florida by road, beginning in 2016, picking up Evans’ legacy, visiting the places he had shot and showing us what the photographer had already anticipated: the state of Florida as a unique place where reality and fantasy go hand in hand and whose contradictions can perhaps be extrapolated to the whole country. The photographs of the two creators are presented in parallel, mixed, intertwining past and present, combining black-and-white and color images, sometimes without the reader being able to distinguish who is responsible for each.

This geographical scope is further expanded with the project presented in this book, Image Cities. It is an exhaustive and conscientious work undertaken in multiple locations and in which Samoylova studies the integration of photography and image in the urban environment, an increasingly present phenomenon in our society. The project, which began in Moscow and New York in 2021, was completed in other cities including Amsterdam, Paris, London, Brussels, Tokyo, Madrid and Barcelona, thanks to the KBr Photo Award.

The list of cities included in the work is based on the ranking established by the Globalization and World Cities Research Network at Loughborough University. This network is the main think tank on cities in the age of globalization and has diversified into themes related to this phenomenon, in which concern for city-to-city relationships is intertwined with research on issues related to international business, sustainability, urban policy and logistics.

Samoylova shows us many cities, but we could also argue that it is just one, unified by seriality, by the repetition in the sequence of images. Thus, as if we were looking at the portrait of a great global city, its depiction invites us to reflect on the role of photography as a creator of the gap between the brand identity of cities and their everyday reality. Through the images we journey into cities under construction or in transformation, where the human figure is barely present. These are urban landscapes where cranes, scaffolding, billboards and false facades accumulate, concealing buildings under construction, anticipating in their renderings the promising result that awaits us behind them. The human figure emerges amidst this large-scale commercial imagery as an endangered, minuscule species that has succumbed to the triumph of consumerism and speculation. Men and women stroll indifferently, as if selfabsorbed, in front of canvases and hoardings dedicated to new luxury housing developments, technology, jewelry, perfumes or fashion, in a sequence of brightly colored, sharpcontoured collages, games of reflections or compositions in a succession of shots.

The last block of this work focuses on the role of women in cities. We cannot ignore the fact that the person behind the camera is a woman, a femalephotographer. Even she herself is incorporated into some of the images, showing her own reflection in the shop windows. Leslie Kern, in her book Feminist City, wonders if it is possible that there is a female equivalent of the male figure of Charles Baudelaire’s flâneur. In this case, Samoylova seems to become a contemporary flâneuse who travels through the cities of the 21st century showing her less recognizable side and questioning the role of women in the global city. The female figure is the center of the consumer society, the object and subject of advertising that links existence to luxury and glamour, and has little to do with the everyday problems and concerns of the vast majority of citizens.

If, in Floridas, the reference to Walker Evans was clear and direct, in the depictions of Image Cities the iconographic motifs of documentary photography by both women and men resonate. Thus, we find echoes of Eugène Atget; of Berenice Abbott and her 1939 Changing New York, a chronicle of the transformation of the city and the triumph of the new over the old; of Reflections, a series by Lisette Model also in New York and in the same year; of the kitsch that populates the images of Stephen Shore; of the color photographs of New York by Saul Leiter; and of course, of Lee Friedlander, one of the photographers revered by Samoylova and who, with his play of planes, reflections and urban landscapes, has shaped our imaginary of the cities of the United States.

As Berenice Abbott once said, “Photography is the right medium to recreate the now… the living world of our days.” More than an outstanding heir to this legacy of documentary photography, through her project Image Cities, Anastasia Samoylova brings us face to face with the most vibrant and current aspects of city life . Since she started this work, there have been major changes across the globe: the COVID-19 pandemic and the war in Ukraine. Both events have transformed many of the rules of the game hitherto existing within the world order. We must remain vigilant, because we do not know what the world to come will be like, but it will be different. And what is certain is that photography will be there to reveal it.